Event - In The Summertime 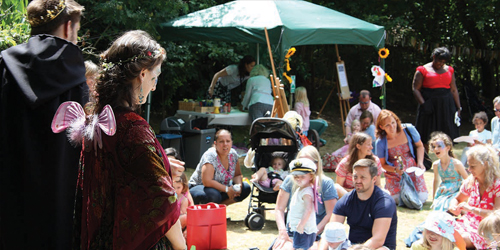 The Guildford Summer Festival is hard to define in a few words. It is a celebration of arts and performance, but it also features beer festivals, sporting events and the madly chaotic raft race. This year, the 33rd annual event, is bigger than ever and features Guildford’s first Alan Turing Celebration.

The first Guildford Summer Festival took place in 1983 and centred around the Guildford Pageants, which used to take place in Shalford Park, and were organised by the ‘Pageant Master’, the late David Clarke.  Every year, events were organised in the town to coincide with Festival time, and so it grew.

The festival attracts large numbers of visitors to the town, which has a very strong tourism sector. It is organised each year by the Tourism, Marketing & Development Manager, Diana Roberts, who first started at the council 13 years ago.

“I was the marketing manager at the gallery, and we would hold festival events, so it was an interesting move when I switched to Tourism eight years ago. The festival falls into my remit, and each year it has grown with many more venues now involved.

“In 2014 there were over 4m day visits to Guildford. People are attracted by the shopping and the heritage, and we also have a lot of tourists who stay in Guildford and use the town as their base. It has been calculated that tourism brought in £330.7m to Guildford in 2014.

“The festival plays a major role in attracting people to the town and we expect this year to be very popular with events such as the Town Centre Cycle Race. “There will be a lot of interest in the Alan Turing events as his family have lived here for 50 years. There are talks, a play, a screening of the film and the walks. The walks are very popular and will book very quickly.

“My personal highlight of the festival is always the outdoor drama. No set designer can match the beautiful outdoor settings in Guildford. If the weather is nice, watching a drama production with a picnic cannot be beaten.”

The festival is chaired by Terence Patrick, who first became involved due to his passion for film: “I am a member of Circle Eight, which is an amateur film and video making group which has been going for over 50 years. We were always part of the festival and then I was invited on the committee and before I knew it I became the Chair.

“During this time I became a councillor and was the mayor from 2011 to 2012. When you serve as the Mayor, you really get to appreciate how important the festival is to the town. It brings people into the town and helps the local businesses, and it just binds the town together. You realise just how much work people put into it to make it a success, and just how passionate people are about the town.”

Few people can match the passion Terence has for the town, and he has made many carefully researched local history films. He is currently working on a film showing the impact the Great War had on Guildford, which is a very moving subject for him. His family history in the town goes back a long way and his grandfather was the Mayor one hundred years before he took the office.

A lover of film and the work of the Guildford School of Acting, it is actually two of the outdoor events that Terence is most looking forward to. “The Raft Race is always a highlight for me, and this year we have the Town Centre Cycle Race, which will attract entries from everywhere. It will be a very big event for the town.”

As always Arts and Heritage events are in abundance with the annual Guildford Arts exhibition at the Mill Studio, Watts Gallery and Guildford House Gallery.

For those who prefer their theatre indoors will not be disappointed. G Live, The Yvonne Arnaud Theatre and the Back Room of the Star play host to a variety of shows and Guildford Fringe Festival arrives in town in July across several venues.

There are plenty of opportunities to get fit this summer – the Round the Hogs Back Cycle Tour is designed for all ages and a perfect way to get fit or keep fit!.  For those who would rather watch sport than participate head for the Cricket Festival.

Local ale is celebrated at the Guildford Beer Festival at the Cricket Ground and there are plenty of opportunities to listen to live music while taking a glass!

This year, as usual, many of the events are completely free to attend.

Guildford Summer Festival runs across the borough from 12 June to 12 August 2016.  Brochures are available to collect from Guildford Tourist Information Centre, The Electric Theatre, and other distribution points around the borough from Mid May.  Tickets for most events are on sale now.

Click here to read the complete article in the Surrey magazine