And Stevens does Score

I still hold the FA Cup in high regard and it is still a great competition to win for today’s players and clubs. What club or fan doesn’t enjoy an FA Cup Final at Wembley? 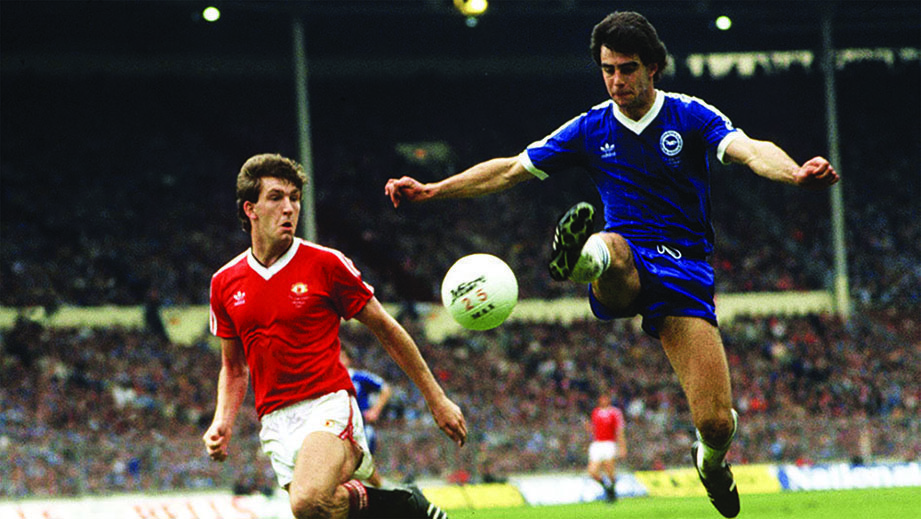 You were part of the Brighton team that played Manchester United in the FA Cup Final at Wembley 35 years ago, what are your memories about that day?

If I chose to write a book about my football career I think the Brighton v Manchester United FA Cup Final would fill two or three chapters.

Back then the FA Cup Final was the biggest game shown live on TV. As a kid during the 60’s and 70’s, it was the highlight of the season for me and it was one of my ambitions to play in an FA Cup Final at Wembley and score a goal. Dreams do come true!

You scored the equaliser three minutes from time to make it 2-2, what do you remember about the goal?

Everything… which tells you how important it was, especially as I sometimes can’t remember what I did only last week these days!

I had not scored a goal all season for Brighton and I was asked to stay back for attacking corners. It was late in the game and I looked across to our bench hoping to get the signal to push forward. Jimmy Melia, our Manager, and George Aitken, our coach, were both frantically waving me forward as a last role of the dice to try and force extra time.

I took up a position in the penalty area where I thought I could attack the delivery from Jimmy Case. Unusually, Jimmy picked out Tony Grealish on the edge of the area as he was unmarked. Tony shaped to shoot, and I started to follow in looking for a possible rebound. Tony’s strike was certainly not his best contact and the path of the ball intersected with my run to perfection. Tony said afterwards that he intended to pick me out and it was a disguised pass, I don’t think so!

I controlled it with my left to smash it with my favoured right foot. I was only just outside the six-yard box and it flew into the back of the net like a bullet.

BBC chose you as Man of the Match that day. How did this rate in terms of the best moments in your career?

I loved the experience, but we lost the replay and that took some of the shine off reaching my first FA Cup Final.

Another one of my career targets was to play for England and appear in the World Cup Finals which I achieved in Mexico ‘86. Running onto the pitch at the Azteca Stadium in Mexico City, versus Paraguay in front of more than 110,000, with a worldwide TV audience was very special. Unfortunately, we lost to Argentina in the quarter final with the infamous Diego Maradona ‘Hand of God’ goal.

Trophies are what marks a career, so winning the UEFA Cup with Spurs in 1984 and scoring my penalty in the penalty shoot was very important to me.

I also won the European U21 Championship with England in 1984.

You were playing in central defence at Wembley because Steve Foster was unavailable - was that the best performance you gave in a Brighton shirt?

That performance brought me to the attention of a lot of people and was certainly one of the best games I played in Brighton colours. I was not aware of it at the time, but clubs had spoken to Brighton with regard to buying me during that season, and apparently the club were not prepared to sell me.

We were battling against relegation and with the cup run continuing, the decision was made, and I’m pleased it was.

Who was your stand out Brighton player in the team back then?

I played with some fine players in my four seasons at Brighton. If you look at the 1983 FA Cup Final starting 11 it was about a collective effort, a team game and less about individuals.

Jimmy Case was a fine midfield player who won so much with Liverpool before coming to Brighton, Gordon Smith had won the domestic treble in Scotland with Rangers, I could list impressive details regarding every player.

On the day against Manchester United we had 12 “stand out” players, that includes Gerry Ryan who came on as a second half substitute for the injured Chris Ramsey - teams only had one sub on the bench back then.

United had big players back then such as Ray Wilkins, Norman Whiteside, Bryan Robson and Frank Stapleton in their line up and won the replay 4-0.  Who was the biggest difference over the two games?

Manchester United fans thought the biggest difference was not one of their own but our returning captain Steve Foster. The same 11 couldn’t start the replay for Brighton because Chris Ramsey was not fit following the injury he sustained from a Norman Whiteside challenge, which meant a reshuffle of the team. It was harsh of the United fans to give Steve a tough time with their verdict, Steve was a fine player for the Seagulls and a vital member of the team.

Has the glamour of the FA Cup diminished now teams put out weakened teams?

Personally, I still hold the FA Cup in high regard and it is still a great competition to win for today’s players and clubs. What club or fan doesn’t enjoy an FA Cup Final at Wembley?

Who was the best player you ever played with in your career?

When I was transferred to Spurs after the 1983 FA Cup Final I joined a club with some of the finest players in world football. On my first day at the club I sat in the changing room with Ossie Ardiles; one of the best England keepers of all time, Ray Clemence, and arguably England’s most gifted midfield player ever, Glenn Hoddle.

When I broke into the England squad there were the likes of Peter Shilton, Bryan Robson and Gary Lineker to mention a few.

Other greats that joined Spurs during my seven seasons at the club included Chris Waddle and Paul “Gazza” Gascoigne, so how can I select just one from such a vast array of talent?

How have Brighton performed in their first season in the Premiership?

Brighton have had an outstanding debut season in the Premier League and although as I say this the Clubs Premier League status for 2018/19 has not been confirmed, I’m sure it will. The growth of the club, the fan base, the team and every individual player has been wonderful to see.