READ NEXT
The Process Of Architecture 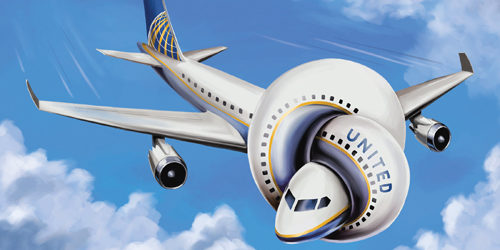 By now I am sure we have all seen the horrific video footage when Dr David Dao was forcibly dragged from his seat on the United Airlines flight by a bunch of overzealous gorillas.

In all my years in the travel industry, I have never seen anything so disgustingly disturbing. As if the physical abuse inflicted on Dr Dao was not enough United’s CEO Oscar Munoz initially tried to justify the airlines actions by saying “the passenger had become disruptive and belligerent”.

Not content with initially misjudging his response to this brand neutralising situation, and without checking that United’s stock price was already in free fall, he then compounded his complete lack of judgement by issuing a letter to his employees in support of what happened.

Hard to believe that earlier this year Oscar Munoz was honoured by being named PR Week’s “Communicator of the Year”. I would love to have been a fl y on the wall when United’s PR team got Oscar locked in a room.

Of course by the next day Oscar was in full reverse travelling at warp speed, I actually listen to his grilling on Radio 4 two days after the event, and I believe Oscar had learned his lesson by then and publicly stated that this would never happen to any United Airlines passenger ever again, period.

I guess if you didn’t know the airlines regularly oversell their aircraft, you certainly do now. The airlines call it “Yield Management”, airlines, like any other business, have to manage their inventory and it’s my belief that the intricate science which now surrounds the practice of selling more seats than you actually have, took hold big time after the terrible events of 9/11.

Many aircraft were flying less than half full and airlines had to reduce losses quickly by reducing the number of aircraft journeys and maximising the capacity of those scheduled.

So were United at fault for overselling the flight in question? No, because it had a full flight of passengers seated and waiting to go. What United got wrong was their crew rostering whereby they needed to get four crew members to the same destination as the plane and had the crewing department been more efficient there would have been no story.

Whether the practice of overselling is morally correct is a whole different story and actually quite an interesting one, so this is how it works.

First up, last year airlines globally refused boarding due to over-selling to over 50,000 passengers and virtually all of these passages obtained an advantage by, in many cases, offering to be offloaded.

The fact is that many people who travel for business buy fully flexible tickets, if you don’t know what time your meetings might finish, this could seem like a good investment, rather than losing the full cost of a cheaper ticket. This enables the traveller to simply no-show for a flight and then book a different flight once they know their new schedule.

The airlines use a very sophisticated modelling process called Binomial Distribution which they used to predict exactly how many passengers are likely to turn up for which particular flight therefore they know how many extra seats they can sell on any particular service.

If an airline, for example, sold every seat on the flight with a capacity of 180 tickets (with a ticket costing £250 each) and they didn’t sell any extra tickets they would make £45,000.

However, assume the cost of bumping is £800 per person in the worst-case scenario, if it sold 15 extra tickets and 15 people had to be bumped its revenue would drop to £36,750.

By using the Binomial Distribution system the airline knows there is almost a 0% chance that 195 passengers will show up, and the probability of 184 passengers showing up is 1.11%.

To find out how many tickets to sell airlines must multiply the probabilities by the revenue for each scenario and subtract this from the earnings of selling 195 tickets.

By repeating the calculation for different numbers of extra tickets airlines can find a number that will yield the highest revenue on any particular flight.

In this example the ideal number of tickets an airline should sell is 198 which will probably make £48,774 - almost £4000 more than without overbooking.

When this principle is applied over hundreds of flights the airline stands to make a handsome profit which makes all the complicated mathematics worthwhile. Whether this is ethical or not depends on which side of the fence you sit.

Only last week there was a case at New York’s LaGuardia airport where Laura Begley Bloom accompanied by her husband and her daughter were going for a weekend break. Their original flight was oversold and the airline were looking for passengers to give up their seats for compensation, Mr Bloom went to the gate attendant and offered to give up their seats for $1,350 each. The offer was accepted and when their replacement flight the next day was oversubscribed, they doubled their compensation. When it happened a third time they took the $11,000 total compensation and went home, stating that they would put it towards their daughter’s school fees.

So there you have it, this is how our complicated industry works and I will leave you to work out how you feel morally about the airlines’ current policy!

A closing note however is that I am aware that there is a group of passengers (probably with not a lot to do other than have fun) who have got together to devise the reverse probability system to calculate the most lucrative flights to buy tickets on which have a high probability of being oversubscribed Do you think this might be karma?