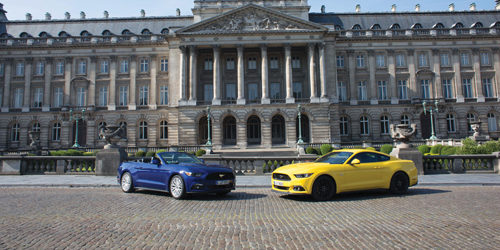 For the first time in history you can buy a right hand-drive Mustang. This means nothing to some and an enormous amount to those that have an interest in huge horsepower American muscle and want something a tad different in the company car park.

Now l know what you are thinking. It will be all grunt and no finesse and will never get around a corner. But you would be wrong. The new rear suspension has transformed the car’s stability and ride control and, for the first time in US history, will actually make it round corners - unless it’s wet or snowy in which case, gird your loins and pucker up as this front mounted V8 with rear wheel drive will spin faster than a hotpoint.

Finesse is not this car’s forte. If you want a superbly built car with all the bells and whistles, go shopping in Stuttgart. That is not what this car is all about. It’s about brute force, a butch road presence and a laid back cruise with the Beach Boys playing and an elbow casually resting on the door. Ok, not quite so romantic on a wet Wednesday in Crawley but we can all dream. This is a car that has not been out of production since its launch in 1964 - it has a cache all of its own.

Let’s start on the outside. It is a very good looking car. The lines are right and it sits on its haunches in a very aggressive manner. The engine choices are a 5.0-litre V8 or a ridiculous 2.3-litre eco-boost. Can you imagine boasting in the pub that your new Mustang has a 2.3 eco-boost engine - they would laugh you out of the door. The V8 really is the only engine to have and, to be frank, is the entire point of this car - power! There are two body styles - the fastback and the convertible with a six-speed auto box or a six-speed manual with a real honest to god manual stick.

The interior is reasonable but if you are used to German build quality, you might be somewhat disappointed, but then this is a Ford so get over it. It all works, is all quite well bolted together and aside from some cheap plastics, there is not too much to moan about. Fords Sync3 infotainment system works very well and with 9 speakers and USB and Bluetooth connectivity, it has all it needs. When you open the doors at night you even get a pony projected onto the ground as you alight. Subtle it ain’t. The rear seats are small and two adults are going to get very friendly on a long trip but then this is the curse of all coupe bodies.

I had my time addicted to American muscle way back when and it really is quite surreal to be sitting in a Mustang with the steering wheel on the correct side.

Now to the entire reason this lump of metal exists at all - the engine and performance. It is quick off the line in an obese kind of way but 60mph in 4.8 seconds is none too shabby and it will pull hard all the way through the rev range to 140mph. It’s not subtle but there is little like it on the UK roads today. It has character and for that sometimes you have to sacrifice. It weights 1745kg so that V8 is really required to get you up the road but it is a hoot. Revving it does not produce fireworks but a steady throbbing from the rear end. Open the taps, and it howls its way up the road. Not past any petrol stations mind you but up the road nevertheless.

So it’s remarkably cheap, has oodles of character, more than enough grunt and will go round corners. What’s not to love?