All eyes on Finland

Sanna Marin leads a four-party coalition, whose leaders are all women...

We all have to fight each and every day for equality, for a better life 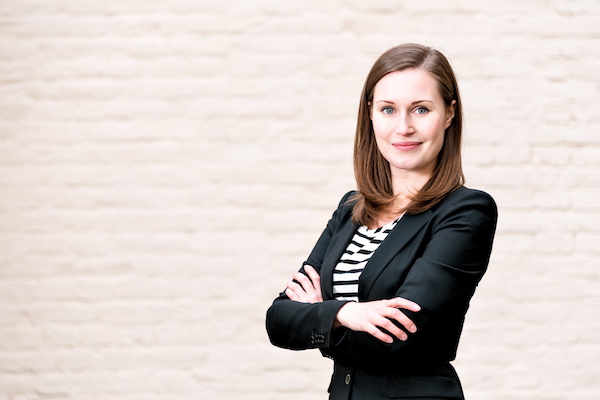 In 2020, it’s hard to find many progressive, liberal national leaders. The populists, nationalists and dictatorial leaders dominate the world stage. We are living in a world of Trump, Putin, Xi, Modi, Erdogan, Assad, and multiple far right bullies from Brazil to Hungary. To find a beacon of hope, you needed to go to the other side of the world to New Zealand and Jacinda Ardern.

And then out of nowhere, Finland announced the appointment of a young female Prime Minister, who has promised to make equality the focus of her new government. In a chilly outpost of Europe, the young are fighting back - but do they stand a chance?

The policy announcement could have been cribbed straight from the Dynamic Manifesto. After just a month in office, Sanna Marin declared that the new maternity/paternity policy was to guarantee seven months of paid leave to each parent, as well as one month of pregnancy allowance. Designed to be a gender-neutral policy, parents will be able to transfer 69 days from their own quota to the other parent, whilst a single parent will have access to the combined 14 months of paid leave.

Marin explained the policy by pointing out that “too few fathers were spending time with their children while they were young.” She put her words in practice when her daughter was born, splitting her parental leave in half with her husband, each spending six months out of work with their daughter.

It was one of her first major policy declarations and there will undoubtedly be many more, focussing on diversity and the environment. Unsurprisingly, The Guardian, in welcoming Finland’s new PM with open arms, gushed, “Sanna Marin reminds us that another politics is possible.”

Marin did not have an easy route to the top job. “Marin’s rise to power exemplifies Finland’s meritocratic and socially liberal society,” wrote Marja Makarow from The Independent. Marin was born into a family troubled by alcoholism and poverty. After her parents separated, she found stability with her mother and her mother’s same-sex partner, in what she has subsequently termed a “rainbow household”. This upbringing instilled a strong sense of social justice in Finland’s new PM, and a determination to create “a society where every child can become anything, and where every person can live and grow old in dignity.”

Marin has often emphasised her commitment to social justice. She said, ”For me, human rights and equality of people have never been questions of opinion but the basis of my moral conception. I joined politics because I want to influence how society sees its citizens and their rights.”

She added, “We all have to fight each and every day for equality, for a better life, as there are things happening in the world going backwards.”

Marin has spoken out in favour of a four-day week and is committed to implement Finland’s environmental targets, which are some of the most ambitious in the world.

From across the English channel, the thought of a young progressive government certainly appeals to this writer. But there is always a nagging resignation. Yes, Marin is offering a bright new way, but this is Finland not England. Scandinavian countries always seem so far ahead in the way they run their societies and look after their people. We can’t even build a new railway without decades of arguments and huge cost hikes. It must be far easier for someone like Marin to succeed in a country like Finland.

FINLAND NO FUNLAND
In reality, this rose-tinted view of Scandinavia is misleading and Finland is not necessarily a haven of progessive thinking. Al Jazeera’s Maija Liuhto describes Finland in a harsher light: “Finland did not actually elect Marin as prime minister. She was selected for the post by her party following the resignation of Antti Rinne [Rinne was dropped by the Social Democrats after mis-handling a national postal strike]. Had there been an actual election in Finland, there would most probably now be an anti- feminist, nationalist government in power.

“Much like everywhere else in the West, anti-immigration sentiment has been on the rise in Finland in recent years. The Islamophobia exhibited by such political forces usually goes hand-in-hand with opposition to feminism or even outright hatred of women. In the last parliamentary elections, the highest number of votes went to Jussi Halla-aho, leader of the Finns Party, which is known for its anti-immigration stance.

“The party’s youth wing has declared itself to be anti-feminist because it believes feminism is harmful to society, and Halla- aho himself has openly hoped that supporters of the green left would be targeted by rapists. His party is now the most popular one in Finland, according to recent polls.

“While Finland continues to be celebrated as some kind of paradise for women, the alarmingly high rates of rape and domestic violence in the country are often ignored. Nearly 50% of women and girls above the age of 15 have experienced physical or sexual violence, according to a recent report. In fact, a 2014 study found Finland to be the second- most violent country in the EU for women.”

And just in case you imagined Finland to be a leader in workplace equality, Polityka in Poland reports that in Finland: “There is a glass ceiling when it comes to the real power: the economy. The proportion of women in senior management positions at companies is lower than in the US.”

In this context, it is no wonder that Marin told a Finnish magazine: “When I was in high school, I felt that the people in politics were quite different and came from different backgrounds than me.”

The challenges in Finland are the same as the rest of the western world, but the difference is the government is determined to lead the way in creating a fairer society. Marin told The Washington Post that the Finnish social policies could be a model for the U.S.

“I feel that the American Dream can be achieved best in the Nordic countries, where every child no matter their background or the background of their families can become anything, because we have a very good education system.

“We have a good health- care and social welfare system that allows anybody to become anything. This is probably one of the reasons why Finland gets ranked the happiest country in the world.” And she has another strategy to grow Finland’s population: welcoming immigrants.

“We have an ageing pop- ulation, and we need people to come to Finland, to work there and to raise their children and take part in making our society better.” [source: Michelle Cheng, qz.com]

THE AGE DIVIDE
While much attention has been placed on gender politics, flexible working and maternity/paternity pay, Marin also stands up for another demographic - the young. She is one of only two Millennial leaders in Europe (the Ukrainian PM also qualifies) and she shares many of the values usually associated with this generation.

The young aren’t exactly well represented by their leaders. In the UK, only 15% of female voters under 24 voted for Boris Johnson and it is estimated that approximately 73% of under-25s voted to Remain. At the last US election only 29% of under-30s voted for Trump. The young lead the worldwide campaign for action on global warming, raging at the inaction of senior leaders.

But it isn’t always as simple as young versus old. It can be regions versus the capital, towns versus cities. In The Spectator, Fredrik Erixon recognises the contradictions:

“As in so many European countries, the Finnish establish- ment response to nationalistic populism has been still more urban centrism. It’s purist rather than pragmatic – and, as a political movement, it’s elitist: for the few rather than for the many. “More than anything else, the new centrism is defined by youth. The old guard are on their way out.

“Finland kicked out old Rinne, and is sloughing off the tired politics he represents. Now they are getting the clarity and purpose of young Sanna. She represents a green and tech- friendly social liberalism, backed up by more taxes and spending. That shift ultimately may reconfigure Finland’s political landscape. It’s an experiment — and one that could easily backfire in a country whose rapidly ageing population is jaded about politics. But the Finns have a proverb for the experiment. Naiset ensin, vaikka heikoille jäille. ‘Ladies first, even on to thin ice.’”

It takes bravery and self- confidence to skate out on to the thin ice, and Marin has both. She has more than the hopes of Finns riding on her. Along with New Zealand’s Jacinda Ardern, she is the standard-bearer for those who cherish progressive values. It is a heavy burden and the weight of opposition is daunting, but these inspiring women are beacons of light in the dreary wasteland of world politics.