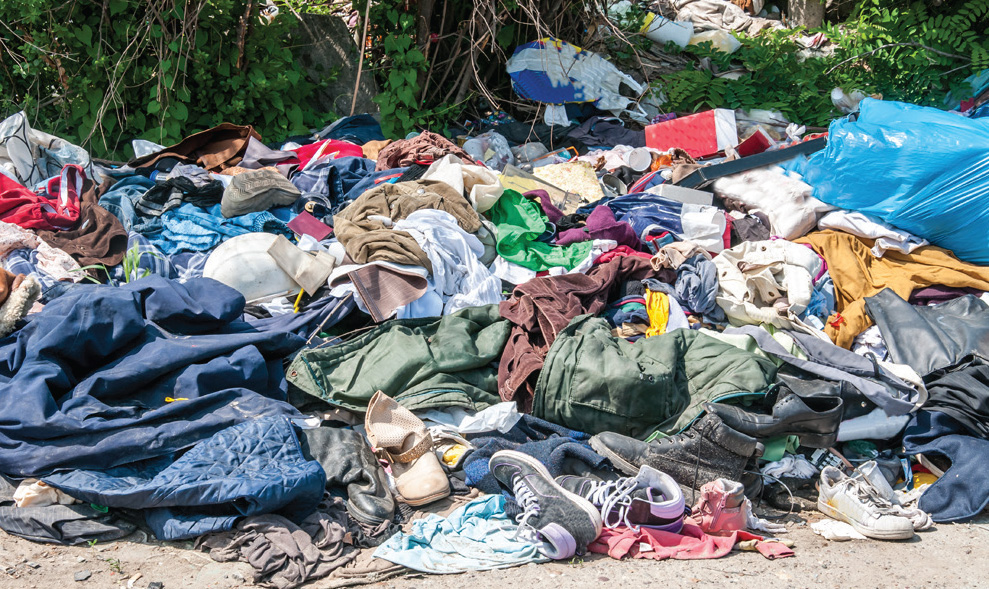 Increasingly, fast fashion brands are becoming one of the biggest environmental risks and contributors to climate change. Over the last 20 years the use of synthetic fibres such as polyester, acrylic and nylon, which are made using fossil fuels, has doubled thanks to the boom in fast fashion and online retailers such as Missguided, Boohoo and Asos. An analysis of 10,000 pieces of clothing that had been added to these retailer’s websites found that 49% of items were made from these new plastics, and many companies refuse to use recycled materials that would reduce pollution caused by the fashion industry. This poses a great threat to our environment as the production of synthetic fibres requires large amounts of energy to be used up, causing great environmental damage over time. Consumers of these brands must be educated on the damage that the production of these clothes is causing and stop falling for the gimmicky 8p dresses and £1 bikinis that won’t last for more than a few washes.

A key issue is the safe disposal of unsold clothes from fast fashion retailers, which are equally as harmful to the environment as single-use plastic packaging. In the UK, 300,000 tonnes of clothing is burned or buried every year. Brands argue that burning clothes that don’t sell is the most cost-effective way of maintaining their brand’s exclusivity, but that comes at the cost of releasing dangerous amounts of carbon dioxide and other greenhouse gases into the atmosphere, as well as plastic microfibres, which greatly exacerbates global warming. They should be legally banned from this type of behaviour. Landfills are no solution either, with an estimated 18.6 million tonnes of clothing ending up being dumped in 2020. With each second that passes by, a truck’s worth of textiles is dumped into a landfill. These materials can take upwards of 200 years to decompose and generate greenhouse methane gas as well as leak toxic chemicals and dyes into the groundwater and soil. Our job as fashion consumers is to make these brands aware that we are determined to protect our environment in any ways that we can and promote ethical consumption and sustainable clothing so that more clothes are made in a way that does not contribute to the climate crisis. After all, these consumer-based brands will only follow where the market takes them; we need to create more public demand for sustainability.

Sadly, it’s not just the land that is affected by the use of these plastics. Microfibres can come off synthetic clothing in the washing machine, with as many as 250,000 microfibres being released from just one fleece jacket. Some of these microfibres can be removed by wastewater treatments, but around 40% are drained into rivers and eventually into the sea. As the fibres do not dissolve, they stay in the ocean forever, which poses an enormous threat to fish and other aquatic animals. Fish eat plastic fibres which then fills their stomachs and gets stuck, causing them to feel full even if they are not. Eventually, these fish, and other sea creatures, will die of starvation, or at the very least suffer severe health complications such as cell damage and inflammation.

These fibres can also bind to harmful chemical pollutants, which can make them toxic and as people eat fish, these fibres will ultimately end up inside of us. A 2019 study estimated that people eat up to 11,000 pieces of plastic per year, and no studies have been commissioned to investigate how this will affect our bodies. Most of the micro-plastics that harm fish in freshwater are microfibres coming from clothing instead of microbeads that can be found in things like exfoliating face wash and toothpaste. Fast-fashion brands are the key to combating this. If they stop selling clothes that are made from these synthetic plastics, stop producing clothes that shed fibres or at the very least use recycled plastics, we can save thousands of aquatic animals, and ourselves, from ingesting these harmful substances.

Recycling is fundamental to the sustainable production of clothing. In some stores, just 1% of their items contained recycled fabric, according to a study from the Royal Society for Arts, Manufactures and Commerce (RSA). The good news is that many fashion companies are taking steps towards this, with companies like Boohoo and Missguided pledging that in the next few years, more of their products would use recycled fibres and/or be more sustainable.

Asos have taken it a step further, using more recycled synthetics and sustainable cotton and introducing a curated ‘responsible edit’ to guide shoppers to clothes that are made with more sustainable materials. Until most, if not all clothing production can be made more sustainably, it is up to brands to stop producing such a large quantity of clothing, as many will go unsold, and for consumers to stop feeding into unsustainable shopping where they can. Ultimately, it is the massive scale of production of synthetic fibres that needs to be stopped to create less environmental damage, as alternative materials such as cotton and viscose can also create problems but are not produced in such large quantities.

The RSA is calling for a per-item “plastic tax” on clothing using virgin plastics that are imported or produced in the UK. MPs on the Environmental Audit Committee claim that a 1p per garment charge is needed to raise £35 million per year for better clothing collection and sorting. However, the government failed to implement this, stating only that it could be considered by 2025. Even fashion brands are in support of this, with a survey from Drapers, a fashion trade publication, revealed that out of 370 brands, 85% thought the government was not doing enough to support sustainability in the fashion industry, and 69% claim they support the 1p charge.

There is no time to waste when it comes to stopping climate change. The MPs report ‘Fixing Fashion’ revealed that UK shoppers buy more clothes than any other European country and twice as many as Germany and Italy. Research shows that textile production contributes more emissions to the climate crisis than international aviation and shipping combined. It consumes lake-sized volumes of fresh water and creates countless levels of chemical and microplastic pollution.

It is now well established that fast fashion is one of the leading contributors to environmental damage, and as the climate crisis increases its pressure on the industry to mend its ways, we as consumers need to do our part to ensure that we are shopping as sustainably as we can, even if it costs us a little more. If we carry on purchasing from fast fashion brands and supporting unsustainable consumption it doesn’t matter if our dress only cost 8p, we won’t have a planet left to wear it on.

11 Tibet: The roof of the world

The Tibetan Kingdom is undeniably on the bucket list of many adventure travellers and spiritual seekers, and in my opinion, a mystical...

The Five Tibetan Rites, also known as the “Fountain of Youth,” are a series of five exercises said to have been practiced...

Everyone needs a strong business plan when starting up a new business but how many of you now feel like you’re running a start-up...