The past 15 years have brought drama for Argentina’s economy, but conditions for international investors may now be ripening 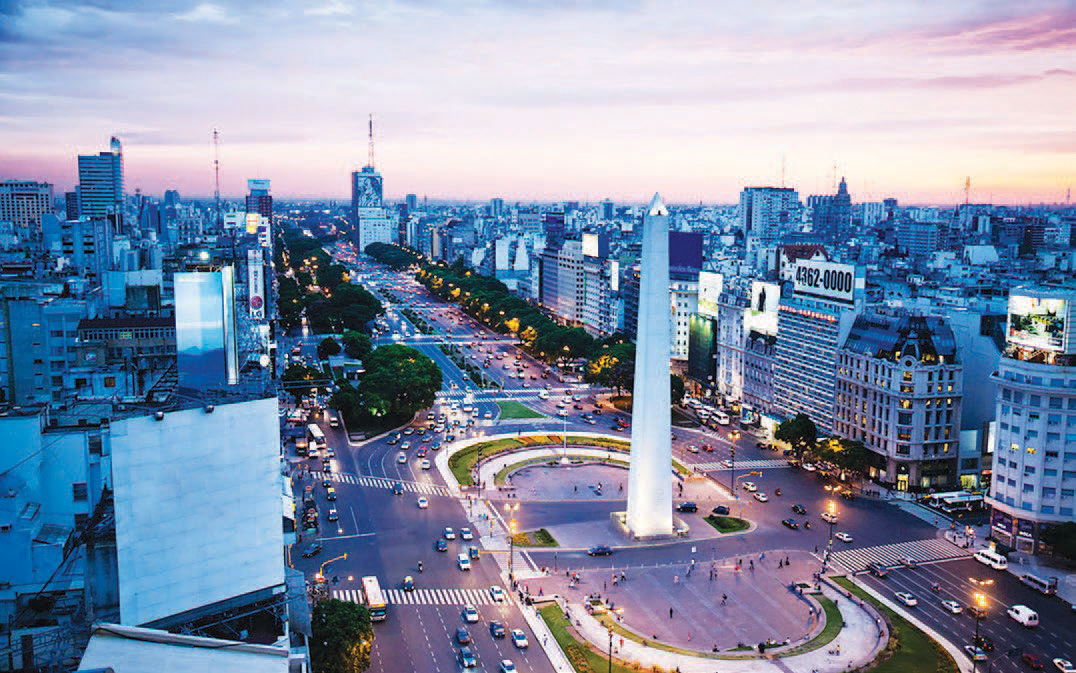 Julio Avenue in Buenos Aires, the widest avenue in the world. Here, two steel portraits of the iconic former first lady, Eva Peron (Evita) adorn the city’s Social Development Ministry building, the site where she gave a historic speech in 1951, defending the rights of the city’s poorest people.

One portrait faces south, towards the working class neighbourhoods of La Boca and Barracas. Eva smiles warmly, a rose flourishing at her side. By contrast, in the portrait facing the wealthy districts of the north – Palermo, Recoleta and Retiro – Eva is mid-speech, shouting into a microphone, her expression exuding power and intent.

Back in the late 19th century, an exodus of affluent families moved from the south to the north of the Argentine capital, seeking higher ground to avoid the spread of cholera and yellow fever – the abundance of elegant classical buildings, inspired by Parisian culture, is their legacy. Meanwhile, in the southern quarters of Buenos Aires, things have remained decidedly less glamorous, where in places, several families share densely packed “conventillo” houses made from corrugated iron and wood.

Located roughly in the middle, to the east of the city, is the former industrial district of Puerto Madero. Originally an offloading point for cargo ships, it was made redundant after the opening of a new city port in Retiro in 1911. For some time, Puerto Madero’s sprawling warehouses and shipping equipment were left idling away, but the past decade has seen the industrial district transform into a residential area for high-earners, à la Canary Wharf. Puerto Madero’s long, spacious (slightly soulless) streets are lined with swish skyscrapers, high-end hotels and glass-paned apartment blocks – some of them topped off with mansard roofs and arched windows, subtly mimicking the Parisian aesthetic in the north of the city.

Puerto Madero’s transformation coincided with a growth spurt for Argentina’s financial prospects. Following years of severe economic collapse, the nation’s fortunes u-turned dramatically between 2002 and 2011, the national economy rocketed by a staggering 94 percent – some attribute this to the heavy social spending under President Cristina Kirchner’s populist left-wing government, which rose to 14.2 percent of GDP). Despite the visible inequalities that remain today, poverty fell by over two-thirds between 2001 and 2010 – from almost half of the population in 2001 to approximately one-seventh. And between 2002 and 2011, the country’s middle class population doubled in size, which now accounts for more than half of all households across the country.

Initially, regardless of the spending power of these newly affluent citizens, a slew of luxury brands began to abandon Argentina from 2011-2015, due to tight import regulations and other red tape issues. However, following the shift to the right in government with the election of President Macri in 2015, and the loosening of restrictions to international trade, experts predict we should soon see a renewed vigour for companies to have a presence in Argentina.

“Argentina’s traditional stance on luxury increases its exposure to foreign consumers, and brands recognise this,” says Paula Goni, research analyst at market research provider, Euromonitor International. “If you look at Puerto Madero, there is plenty of development going on in terms of luxury lodging and residential buildings, and this no doubt connects with the luxury identity of the city.

She adds: “Brands that left the country are now coming back, because they know the consumers want to have them here, and they

don’t want to have to leave the country to continuously buy what they want to buy. This will no doubt increase the luxury spend in all aspects of the economy. We just need to be patient, because brands are still cautious about how they do it – they want to do it right, they don’t want to disappoint their domestic customers.”

The double-digit inflation of the peso was a pressing issue when Marci came to power in 2015, and another obstacle for international investment. However, shortly after his inauguration, Macri lifted the currency controls that were distorting the market (his predecessor, president Cristina Kirchner, had been using central bank reserves to prop up the peso.) It was a bold move, and one that initially weakened the Argentinian currency further, but Macri’s overall aim was to restore some credibility in the value of the peso. Two years later, inflation has fallen by half, so things appear to be moving in the right direction.

Argentina’s turbulent, fascinating economic history is redolent of the nation’s revolutionary heritage. The flip-flopping between left and right-wing governments has produced dramatic results that, even when they are for the better, have created some knock-on effects to be neutralised by the next person to grab the baton. Now that it’s opening up once again for international trade – at a time where populism is on the rise across the world – let’s see what the next 15 years bring.

Buenos Aires Districts: What to see and where

Recoleta
Recoleta Cemetery - where the gigantic ornate tombs of wealthy families are lined up like a mini-village; and Ateneo Grand Splendid, a theatre that has been turned into a book store.

San Telmo
Feria de San Telmo is a popular artisan market that takes place every Sunday. During the evenings, the area around Mercardo de San Telmo is where you’ll find hipster bars and restaurants with high quality fare.

Puerto Madero
Stroll along the trails of the 350-hectare ecological reserve that sits between the area’s skyscrapers and Rio de la Plata estuary - great for birdwatching.

Top places for a meeting/event

El Viejo Almacén
The oldest tango house in Buenos Aires, this San Telmo institution prides itself on the authenticity of its belle époque vibe. Watching the nimble dancers move to the four-piece band amid the rosy-hued lighting is spellbinding, and the entire venue can be hired for a gastronomic tango experience. viejoalmacen.com.ar

Teatro colon
Acoustically one of the best concert halls in the world, this beautiful neoclassical structure is worth visiting even just for a group tour, but witnessing a concert or a ballet in the opulent main theatre will leave a powerful impression. Tickets for corporate groups should be booked well in advance, and the season runs from April to December. teatrocolon.org.ar

Palacio Duhau-Park Hyatt
Situated in Recoleta, this high-end hotel combines two buildings - a modern tower with a restored palace, with a lush garden between them, perfect for cocktail receptions. There are also several flexible meeting spaces, including a sleek boardroom in the palace part, where you’ll also find the intricate-walled Oak Bar and the afternoon tea lounge with a terrace. buenosaires.park.hyatt.com

Alvear Palace Hotel
A member of Leading Hotels of the World, this landmark luxury hotel, established in 1932, is set along the designer store-studded Alvear Avenue. Its décor is inspired by Louis XIV and Louis XVI, with chandeliers and gold leaf cornicing featured throughout its public spaces, and its 207 rooms and suites are spacious and elegant. alvearpalace.com

Alvear Icon Hotel
Opened earlier this year in an imposing Puerto Madero skyscraper, Alvear Icon offers 150 contemporary rooms and suites with muted colours and Hermes toiletries in the bathrooms. There is ample space for meetings and events, while the 32nd-floor Crystal bar with floor-to-ceiling windows offers breathtaking views over the Buenos Aires skyline. alvearicon.com

Hotel Madero
Also in Puerto Madero, this chic upscale hotel has 197 smart, sumptuous rooms and suites. The top-floor Montmartre lounge has a terrace for gatherings, as does the trendy ground floor white bar (both can be hired exclusively for events). There’s also a spa with an indoor pool, massage booths and an outdoor spa bath. hotelmadero.com