Humans really are the ultimate idiots

READ NEXT
Protect your data and your brand 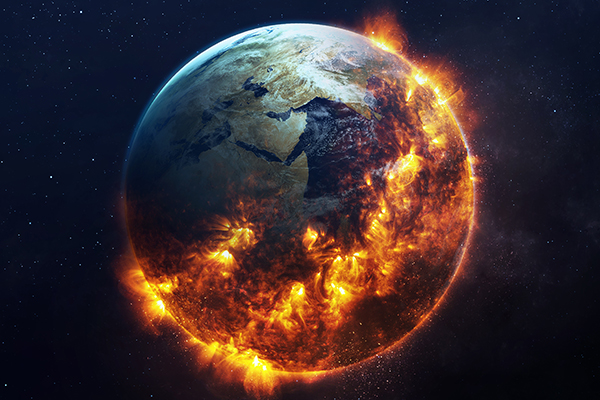 I am not a climate activist, nor will l preach about the subject just to add to the howling roar. But l will offer a reality check on the topic and how worldwide business will be deeply affected if we don’t do something about it. There are still odd pockets of Neanderthals who deny any form of climate change but the majority of intelligent human being cannot deny that human interaction with the planet is damaging it – possibly way beyond our ability to fix it.

Some say weather conditions around the globe are normal climatic events that have occurred for millennia and just because human records only go back a hundred years or so, the planet works in million-year cycles. But many would venture that the records we have are enough to scare the pants off us. Looking at said records dating back to 1850, 2019 was the second hottest year on record with the worry being that the first was in 2016, making that decade the warmest for 170 years.

In addition, plastic invades our world and is in the gut of almost 100% of our birds and sea life. Every piece of plastic ever produced is still knocking around the planet. Coral reefs are bleaching (dying) at a rate never before seen and will never return. CO2 emissions continue to rise dramatically, and with China building a new fossil fuelled power station at the rate of two per month, there is little chance it will decline any time soon. We continue to fell forests, build on flood plains, deplete the green belt, pump chemicals into our waterways, clear the rainforests for the planting of cheap palm oil, fly on filthy aeroplanes at the drop of a hat and wage continual wars over the meagre spoils that remain.

But if we are to do something about this, we had better be prepared to change our lives in such a dramatic fashions, that modern life would be unrecognisable.

Let us imagine that if we switched off modern life today, all power usage and all CO2 emissions, around the world that nature would recover in 100 years. Then we would need to look at how long we have under these worsening conditions before human kind is wiped out. On this imaginary clock, l would give humans 50 years before it is far too late and the planet bites back. Therefore, we are doomed.

Our oceans are the perfect model for this. We are eating the fish way faster than they can replenish, and having been a marine activist for 20 years whilst living in the tropics, having been arrested twice and deported once for my furious actions, l can assure you l have a very good handle on this particular subject. In my opinion, fish are gone for good. They will never recover from mass human consumption created by factory fishing, the sedimentary run off from our chemical soaked land and the plastic invasion in every inch of the worlds oceans. Why do you think the latest record for a Blue Fin Tuna of $2.4 million should resonate?

It’s because they are so rare the price is through the roof. Stop fishing to allow them to recover? Not on your life – we just try harder to catch them as they are so valuable. Humans really are the ultimate idiots.

Everyone writing on the subject ends with a note of hope that ‘we can do it’. Sorry, but I will end on a note of ‘no we can’t’.

We are not prepared to turn back the clock and rid ourselves of all modern conveniences. To make any small difference we would need to halt production of all fossil fulled engines, ban flying, ban the manufacture of all plastics, ban the use of chemicals, ban the felling of a single tree, ban the burning of rubbish, ban fireworks, ban oil drilling, ban antibiotics, ban fishing, ban war, ban meat consumption and kill at least 50% of all humans on the planet.

If we did the above today, most experts agree we might have a 50/50 chance of surviving what nature is set to throw at us. You and l both know that we will not even action 2% of the above.

Humans need hope. Humans need to feel that someone somewhere is doing something about our problems therefore allowing us not to worry too much and calm down and carry on. Humans really are the ultimate idiots.

Perhaps all the experts are wrong. Perhaps Sir David Attenborough is wrong when he says ‘Human beings have overrun the world. Our planet is headed for disaster’

It has long been accepted that the loss of Arctic ice is the tipping point for the planet; the point of no return. Well, stop reading now if you are prone to depression. That very ice has declined by 78% between 1979 and 2012. That’s 10 trillion tons of ice that’s melted into the sea, amplifying global warming and equal to around 250 billion tons of carbon dioxide. When it all goes, and it will, sea levels would rise by up to 58 metres and global warming would increase off the scale – effectively, human would never be able to survive.

What can we do? Everything we can l guess is the answer in an attempt to slow it down in the hope that technology finds a way to reverse the decline, or we find out we are wrong and nature recovers. Trouble is, with the last scenario is that nature has a way of protecting itself against such damage therefore nature will have to rid itself of the offending species – us.

Humans really are the ultimate idiots.

The UN has just come out with some shocking statements about the state of the planet.

The UN Executive Secretary for Biological Diversity has implored world leaders to ensure that 2020 is not just another “year of conferences” on the continuing ecological destruction of the planet, urging countries to take definitive action on deforestation, pollution and the climate crisis.

The destruction of life-supporting ecosystems such as coral reefs and rainforests means humans risk living in an “empty world” with “catastrophic” consequences for society, according to Mrema, who is responsible for spearheading a Paris-style agreement for nature that will be negotiated this year.  The problem here is that all governments are absolutely committed to finding a remedy for the crisis, until it comes to actually doing something. The response is always “ah well, that’s a big decision and we will need to set up a committee to discuss that”. That reads as “it’s too contentious to deal with therefore we will kick it into the long grass”.

In May last year, the world’s leading scientists warned that nature is disappearing at a rate hundreds of times higher than the average for the past 10 million years. Experts had previously warned that humans are driving the sixth mass extinction event in the earth’s history.

“We are leaving our children a dead world”
Elizabeth Maruma Mrema, UN Convention of Biological Diversity

When asked what would happen if governments did not take sufficient action, Mrema said: “The risks will be major. One is that we will not have listened to the science and the evidence provided. Because we will not have listened, it means the global community will have said: let biodiversity loss continue, let people continue to die, let the degradation continue, deforestation continue, pollution continue and we’ll have given up as an international community to save the planet. I hope that’s not where any of us would want to be”

Is this a problem adults have given up on in the hope that the youth of today will fix it tomorrow? Greta Thunberg certain feels that’s the way we are going and she is probably right. Trouble is that we do not have the time to wait for them to grow into adults. The problem is here today, right now.

The UN has organised a youth summit this April in Miyazaki, Japan which the organisation hopes environmentalists such as Thunberg will attend. “Our children are asking what climate they are going to inherit from us if the planet they are seeing is polluted, the ocean they are seeing is full of plastic and the consumption patterns are leading to more pollution” stated Mrema.

The children know exactly what their rights are, what they want and what they expect from their parents” she said. Whatever is negotiated today, will affect our children far more than us”

In short, adults are in charge of our children’s future and not in 30 or 50 years but in 5 to 10 years. Many of us will still be alive when the planet collapses and what will you say when your kids ask: “what did you do to help stop this ignorant, wilful destruction of our world?”

I wonder what your answer will be?