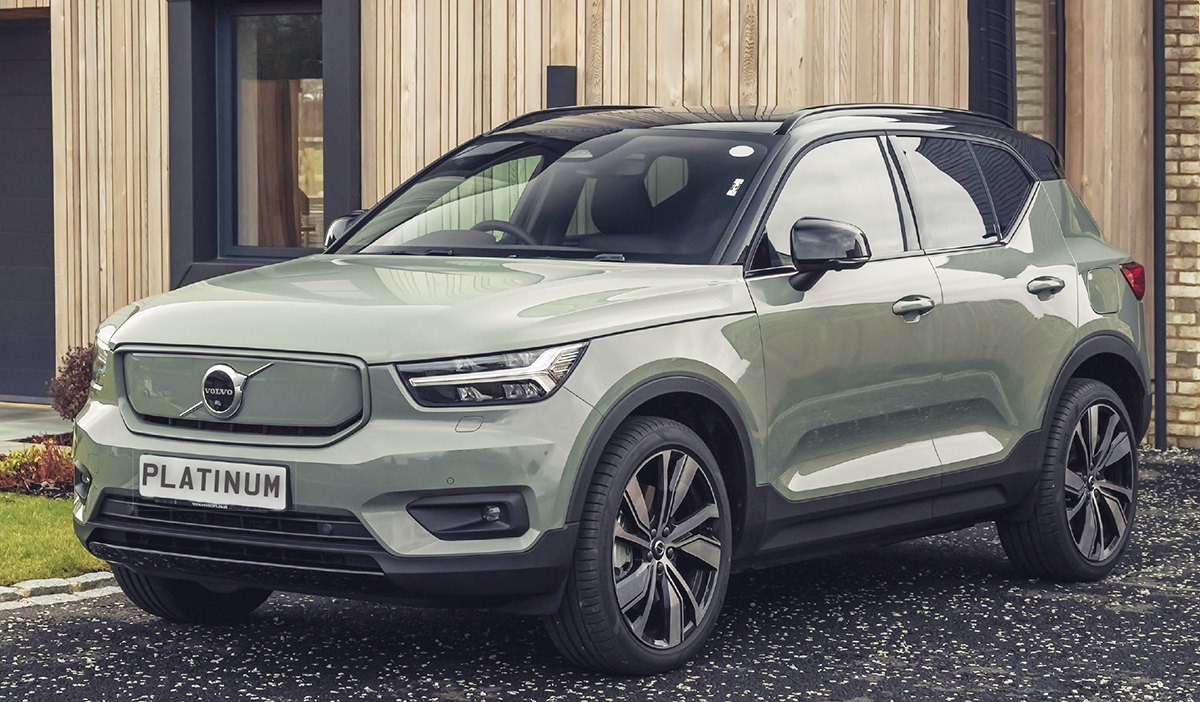 The electric car sector is exploding with just about every manufacturer lining them up and companies such as Jaguar and Ford clearly stating that from 2023, they will cease production of fossil fuels models. This is quite a shift and a race if ever l have seen one.

On my drive now is the Swedes’ first full electric model, the XC40 Recharge Pure Electric P8, to give it its full title, and l have to say it is absolutely cracking. Volvo’s Recharge is the company’s sub-brand, one that will encompass all of its hybrid or fully electric cars. CEO Håkan Samuelsson reckons electric vehicles will account for 50% of Volvo’s sales volumes by 2025.

Outside it is a very good looking car thanks to British designer Ian Kettle, who was stolen by Tesla not long after its reveal but his job was done. The lines are smooth, the new wheels are superb and there is not much l would change about it.

The P8 is powered by a 78kWh lithium ion battery pack mounted under the floor, that feeds two electric motors, with one on each axle to provide all-wheel drive. Power output is 402bhp, torque a stunning 487lb ft, which in turn translates to 62mph in less than five seconds. Very un-Volvo. They claim a WLTP range of 260 miles and you can charge 80% of that in around 40 minutes. On a standard domestic 7-11kW wall point charger you’re looking at eight hours.

For those who have not driven an EV, l should point out that the acceleration is not just quick, but the smooth linear progression is stunning. With no oily cogs moving around and
pistons pounding away trying to keep up you have just constant acceleration that seems never to want to stop. It acts like a slingshot and launches you out off corners, and the blast off the line will leave the vast majority of fossil-fueled cars languishing in your wake, with a look of total shock on the driver’s face. It is a tad addictive but, of course, punishes you on the battery range if you like to bury your foot into the Wilton.

Around town it is a blast to drive and so easy as to render the current driving test obsolete. Aided by a multitude of cameras with one of the clearest resolution images l have ever seen on a car camera. Parking is a breeze too. The one thing that it takes time to get used to is the regenerative braking. When you release the go pedal, the car quite dramatically starts to slow down without the need for the brake pedal. Once you get used to it, there is very little need for the brakes at all. Foot off gas at the right time and it will roll to the lights and stop itself awaiting your next command. I would think that brake pad manufacturers are screaming into their cocoa.

The ride is pretty good too with front suspension by McPherson strut with coil springs, and there’s a multi-link set-up at the rear and it pretty much sucks up everything our shameful British roads can throw at it.

There’s also an enhanced Pilot Assist, which relies on Google Maps for speed limits and bends in the road. Volvo is probably further along the road to autonomous driving than most, but the P8 doesn’t drives you nuts with warning chimes should you stray across a white line.

Inside you have the familiar quality of Volvo with a great 12.3in hi-res digital display developed with Google including maps, Play Store and Google assistant (that actually works!) and you can sign into your own Google account and personalise the lot. One little item that
l found odd is the range, as this is shown as a percentage rather than how many miles you can achieve, which is not terribly helpful if you suffer from range anxiety but then Google will guide you to the nearest charger and tell you if you are going to make it. It’s just all
a part of the automotive mentality adjustment that we are all going to have to deal with.

There is oodles of space inside for six-footers, front or rear, and the carrying capacity of 413 litres is good, with an extra 31 litres in the front where the engine would normally be.

I enjoyed my week with this car but you do have to consider that, at £53,000, it is nearly twice the price of the fossil version but then, in the long-term with zero petrol bills, zero road tax and greatly reduce garage bills it is likely to work out at a very good deal in the longer term – and what price saving the planet?

This is nothing less than the most dynamically capable Volvo ever.

Organisational Culture is a set of behaviours and practices that become the norm. By repetition of these “habits”, our...

Platinum sat down with The Apprentice star, Debra Barr to find out what she did following the programme with her company Xcess Trading,...

The Chancellor had a difficult task in this Spring Budget: to indicate how he might balance the Government’s books in the future,...