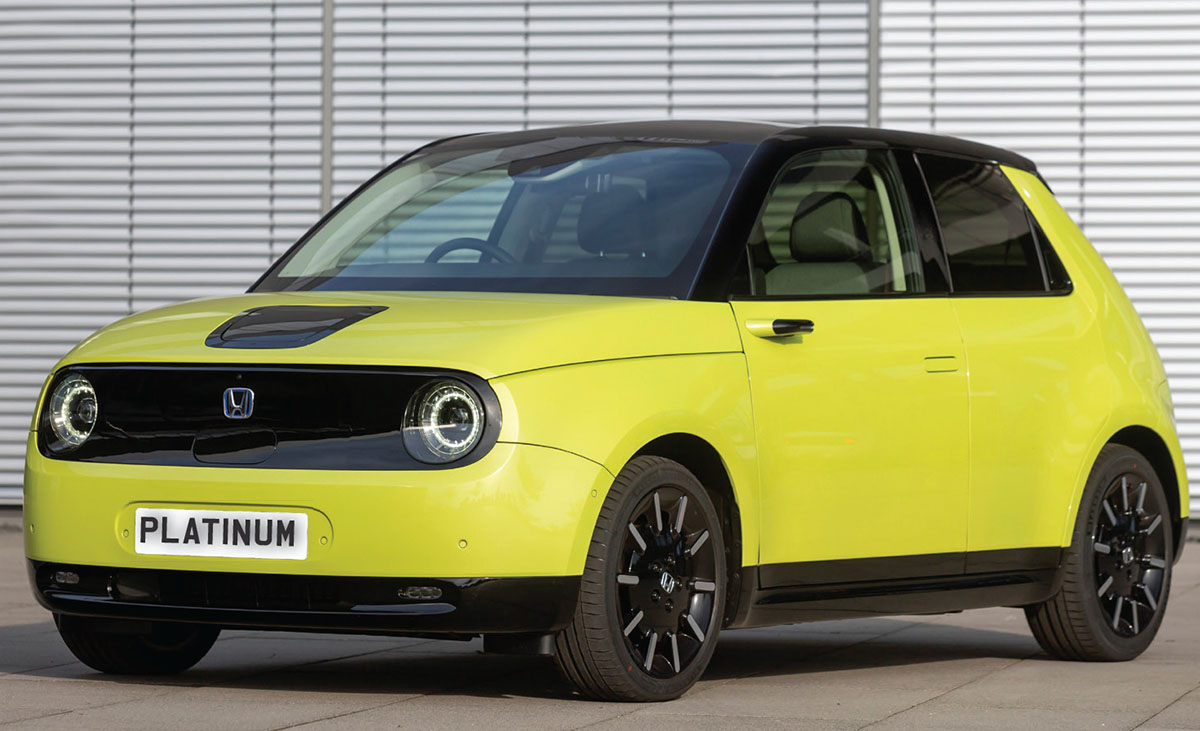 Honda’s first electric car is crammed with tech, including the funky TV screens inside the car for the wing mirrors. This is a first, although l am starting to receive cars with a TV screen within the rear view mirror, but still a first for wing mirrors. For me this creates a problem. I am short sighted and therefore had problems with my glasses on as l cannot focus well on the screens that are just at the wrong distance. If l remove my glasses, all is well except for the fact that we will all die as l cannot see what’s coming. Myopia, as it is called, affects 1.4 billion people around the world so this is a problem they will need to fix.

The e is the size of a Fiat 500 and is certainly a town car with the range of 137 miles and, like all sparky cars, goes to 30mph in an instant. They have certainly tried to justify the stiff price with what they have stuffed into it making it look like a multiplex cinema. Oddly, they have then surrounded all that with some very old fashioned wood veneer which looks awful.

This is up against the likes of the electric Mini, Fiat 500 and Renault Zoe, all of which are substantially cheaper so Honda are relying on the tech and the very odd look of the car to achieve sales.

There are two battery options giving you 134bhp and 152 bhp and both will get you to 60mph in about 8.5 seconds and both with the same quite limited range of 137 miles (100 in the real world). Acceleration is rapid as always and as this is shamelessly designed as a city runaround, the lock is impressive at 3.1 turns to full lock with an 8.6m turning circle that would give a London cab a run for its money. With a standard charger you will get 80% battery in 30 minutes.

Honda knew the world was watching so they over-engineered every aspect of this car. Approach the car and it senses the key, pops the door handles out and the headlights put on a little dance display. But that’s just the beginning… Honda calls it a lounge-style interior, if your lounge had naff furniture and six TVs. Then there’s the screens - two six-inch angled displays for the wing mirrors, an 8.8-inch instrument cluster behind the wheel, the rear-view display and then two, side-by-side 12.3-inch screens as the centrepiece – one for the driver, one for the passenger. Each features six shortcuts on the outer edge that can run separate apps at the same time. Once parked and if you really are that bored, you can turn the screens into an aquarium and even tap the screen to feed the fish! More money into range and less into daft gimmicks me thinks.

The one aspect l could never get over is that it’s the ugliest car l have ever had the misfortune to drive. Some will love it and find it cute (there is treatment available!) l found it endlessly embarrassing and my kids flatly refused to get into it. One, who has NEVER taken the bus in her life, did. Enough said.

Electric vehicles (EVs) are all over the place in a rush to beat the government’s deadline of 2030 for the end of all new pure...

This model is Jaguar’s first move into the electric vehicle (EV) market and a bold one at that; the first mainstream manufacturer...

88 How to structure your family company

Once your business gets to a certain level of success and stability, it’s always a good idea to think about the future –...