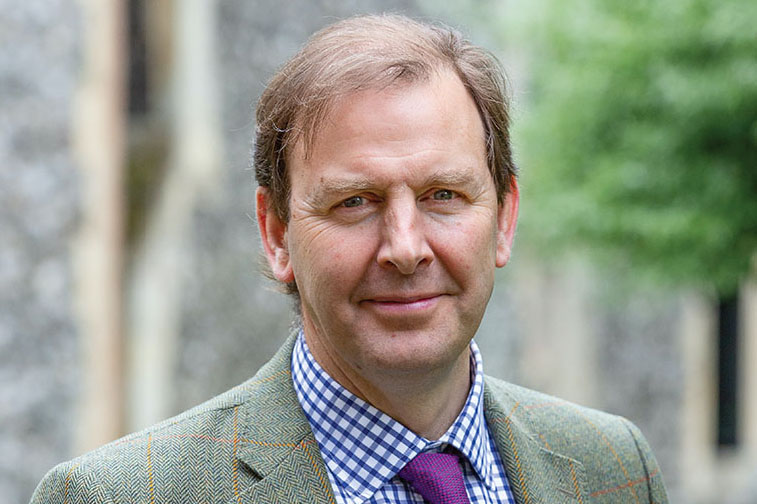 For more than 170 years, Hurst College has taken on the task of educating selected individuals from our youth, moulding and shaping them to be fit for the world which lies ahead, no matter the turmoil it may be in; especially in recent years. With its long history there inevitably comes peaks and troughs in the school's performance, though few today could say that the school sits anywhere other than at the height of its performance, even winning the Sporting Achieve-ment award in the 2020 Independent Schools of the Year Awards. What is it that makes such a school rise so high? It's in search of the answers to this question that I went to the stunning school grounds in West Sussex to talk to its head, Tim Manly.

Given the school's long history, when did the school go co-education?
It's been over 25 years now. It was co-ed when I arrived, though quite a small percentage of girls then, probably no more than 30%. We've reached a stage now where I think we are at the equilibrium point in terms of scale, just shy of 1300 in the school. 50/50 boys/girls, 50/50 boarding and day in the Senior School, so we are now of a scale that is sufficient to do all the things we want to do, but not so large that things become Darwinian with restricted access only to elites.

I think we are at that stage now, and if we were larger, there is a danger of limited opportunities and "if you're not good enough you're not getting on stage, you're not getting on a team." I have a choir of 140 here, and although they may not all be world class singers, they have a great experience and that is what counts. We have over 20 drama productions in a normal year and that's great. In their future lives our children will need those key skills of being able to stand up on stage, address an audience, make a speech, engage with a group of people under pressure.

What are your views on co-ed versus singular sex education?
I do not have a particular view as to which is better. I think it's more about the general culture of a school and making sure that whichever kind of school your children are in that there is a culture and a confidence individually that enables all pupils, our daughters and sons – I've got two daughters and two sons - to be themselves and not to succumb to peer pressure of any sort. So, I don't have a major view on it. Excellence in schools comes in many different shapes and forms.

We have to touch on it, I don't want to labour it, but the two years we've had with predicted grades and algorithms etc, how did it work for you with the grades this time around? We will forget the first year which was a disaster.
I agree, the management of the grades by the Government was incompetent. This time around, though, we had a very clear sense of what we would do. We had rigorous testing all the way through because we thought that we would be pushed on our assessment, we also suspected that there would be grade inflation. The most important thing for us was to complete as much of the programme as we could, because these students are likely to study their A-level subjects at university. Also, it was important to test them sufficiently to nail down the knowledge as well as have the data to back up the grades.

Do you believe that there is going to be any stigma around the Covid generation concerning their grades?
I think it will be forgotten pretty quickly, and people will instead focus on the degree result they achieve. I don't think there will be a huge stigma, but it slightly depends on what happens next. The real problem is if we go back next year to the 2019 levels of grades, then the current year group may believe they are the poor relation of the previous year. Then we have a problem. Arguably, if the grading system is changed around (numbers instead of letters at A-level, letters instead of numbers at GCSE) so they can't be directly compared with what has gone before, then it might work.

What's your view on the debate that is going on at the moment about reverting back to the old exam process, or do we go on to a hybrid of teacher assessment and exams?
All outcomes need to be independently assessed under rigorous conditions. The standard exam process does this. You can assess independently but we must ensure that those exams or coursework are sat under conditions that are not subject to any sort of influence. Having said that we know that sometimes on the day people don't do as well as they should have done. Ideally, a hybrid is attractive (formal externally marked exams and internally school assessed material) but you have to get it so that the coursework is done faithfully and throws up reliable data but, how to do that without vast machinery of checking and cross-checking?

Something I spotted on your site the other day was 'should entrepreneurism be taught in school?' Personally, I would remove the question mark because so many clients I speak to are saying it is so difficult to find young graduates because they just don't know what's what in the business world, they're not ready for the workplace. Educationally they are sound, but they just have no idea how to come into the workplace. I don't understand why it's not taught.
Over the years, we've had many students taking Business Studies, joining our award-winning career placements scheme or on the Young Enterprise programme who have shown themselves to be really good at planning, producing, selling and marketing, and you can then see them thinking "I can do this." For Young Enterprise, it's team-based and not just about bringing out the best in yourself but also about bringing out the best in other people, and that's probably a better life lesson. If you look at the Steve Jobs of this world, they've all got other people in the mix who have made it together, and that skill of being in a team and working together is the best lesson.

My only question is, should it be taught at school?
This isn't me dodging the question but it's about much more than commercialism, it's about individuality, that personality, how you perform as an individual and your ability to recognise and take risks which are going to pay off.

It's whether you can take people with you on the journey and whether you have the energy and resources to carry on through the really tough times, knowing that you are not a failure. Sometimes I say to my younger students, who don't make it into the senior school with scholarships, that it's better to take a knock now, knowing that you're more or less in the right place and so be better prepared for when the big opportunity comes.

Diversity and inclusion, do you have the same wave of gender questioning as everybody else, and how do you deal with children who are going through that level of change?
It's a very complex and emotive area and it's one where you have to tread very carefully. The good side of it is that pendulum has been pushed quite a long way, as it often has to be when you need to bring about change, whether that be on challenges surrounding race, gender or sexuality. In one sense I see it as very healthy that we have moved away from a time when, for instance, 'gay' was used as a slur to a world where that is completely unacceptable.

As with any movement, there has to be a balance struck between what is healthy, open and constructive dialogue that protects certain individuals, and what becomes aggressive campaigning.

We are a school where I don't want anybody feeling like they are being put in a box, put down, or not allowed to be themselves. I hope that we manage this agenda with intelligent caution because there is no doubt that in school of 1300 I will have children here who are questioning, and that is a perfectly healthy thing to do. Equally, I don't want there to be a dominant 'cancel culture' which means that these things become very difficult to approach.

It's not an easy area for schools, I go back to where I started, it was an area due for change and the environment now is much kinder and healthier than ever before. I want the children here to grow up as happy and healthily as possible, in their own way. Therefore, I want to keep an even balance, so that if someone feels they have an issue they can talk about it openly, as an individual, not as a part of a campaign.

Anything you would like to say that I haven't brought up?
One area I believe is very important is the how the last 18 months of Covid have massively highlighted the tension between advantaged/disadvantaged, independent/public sector. We are endeavouring to set up a multi-academy trust, which is going to see us linking a small number of primary schools, and ideally a local secondary, to work with them in a way that opens up the horizons and experiences of people both at Hurst and in the associated schools. I also hope that this lessens what I think can be a slightly negative perspective of places like Hurst which is that we are insular and self-absorbed. Schools like this are going to have to do more to be seen to be a part of the public good. That's an interesting area to watch.

Given the responses of Tim Manly, and his clear focus on the culture and team spirit of the school as a whole, doing away with the all too typical elitist mentality of independent schools in the country, its no surprise that the grade percentages between A*-B at A-level sit at 91% of the cohort, with GCSE equivalents being just 1% less. Though these grades aren't the only thing that makes Hurst special, it's the whole ethos of the school: mutual support and encouragement to try, whether you succeed or fail. Perhaps others should start taking notes.

The staid image of Volvo cars is long gone and they continue to produce world-class vehicles. Having been one of the first to offer...

90 Peer learning: You are not alone

I hope that a summer break has meant that you are able to return to work refreshed and energised for the months ahead. That said,...

The new e-commerce VAT system introduced by the EU on July 1st impacts the treatment and compliance associated with supplies of goods...