Forget package holidays and Brits abroad, there are many sides to this Balearic destination. Rose Dykins reports on plans for boosting business travel to Mallorca.

The Sunday Times named the Mallorcan capital of Palma de Mallorca the best place to live in the world, even suggesting that it makes a feasible “commuter destination” to London

READ NEXT
What Is a Notary 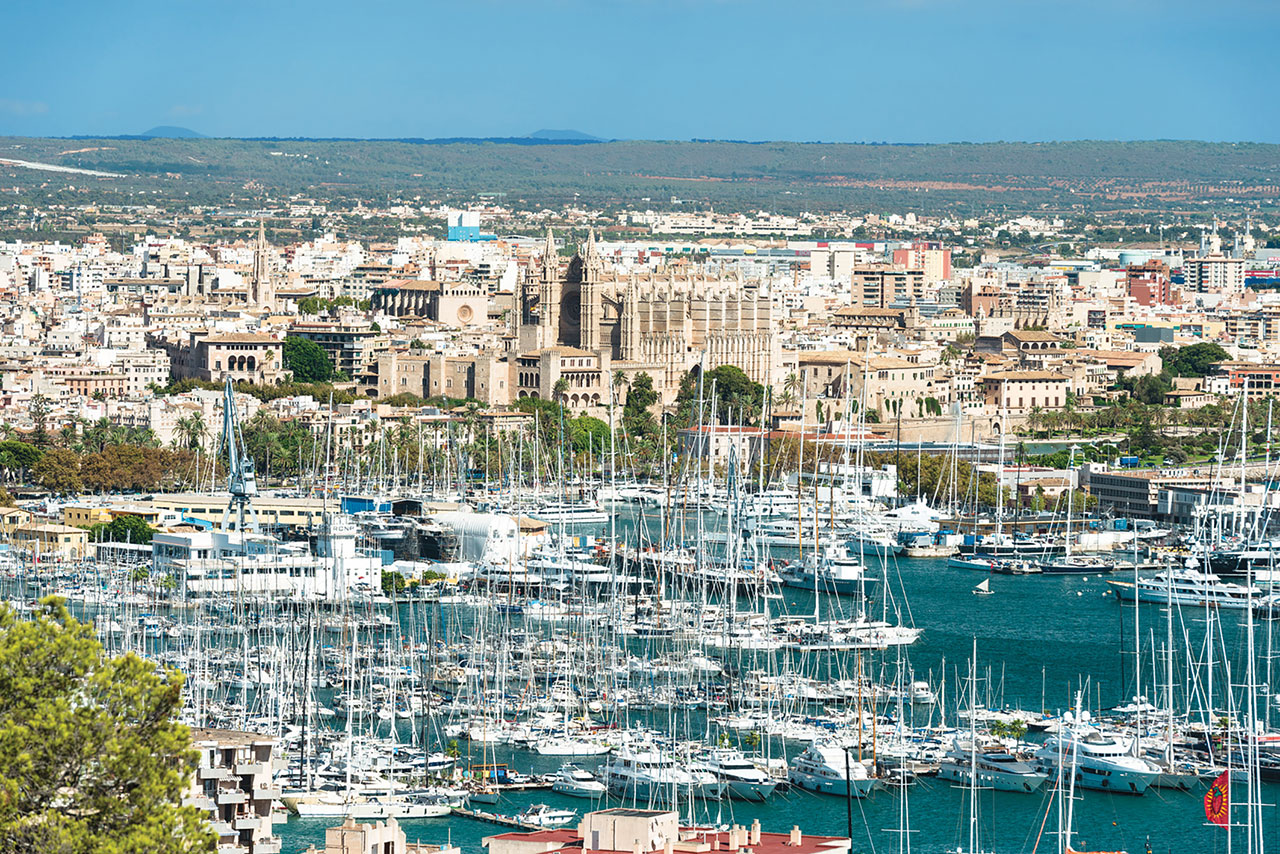 When checking into the BH Mallorca hotel, instead of being handed a room key card, a scannable laminated orange band with the hotel’s address printed on it is clamped round my wrist. The following day, I attend a blingy onsite pool party, where a toned dancer in a gold one-piece writhes around in a giant floating martini glass, and former contestants from the reality TV series Love Island pour shots into glitter-cheeked revellers’ mouths. At dusk, thousands gather at the hotel’s music arena to mosh along to live performances from Craig David and Tinie Tempah, before heading two minutes down the road to the debauchery of Magaluf’s strip. At 7am, I’m awoken by someone repeatedly hollering “Scotland!” outside my window. When I arrive at the front desk to check out, a staff member simply whips out a pair of scissors, cuts my wristband in two, and off I go.

Of course, there’s much more to Mallorca than the hedonistic resort of Magaluf.

Although it brings in the crowds, its notorious party scene can overshadow people’s perceptions of Mallorca as a whole. Those in the know – including the 17,000 or so British expats who call it home – adore the Spanish island for its picturesque towns and beaches, its climate, its off-road adventure activities and its easy-going, friendly atmosphere. In fact, in 2015, The Sunday Times named the Mallorcan capital of Palma de Mallorca the best place to live in the world, even suggesting that it makes a feasible “commuter destination” to London (a two-hour journey by plane).

Outsiders may also be less familiar with the island’s competitive offering for corporate travellers. “The meeting and incentive business is not something new to Mallorca,” says Csaba Boda, executive assistant manager of the Park Hyatt Mallorca, a five-star hotel that opened in the north of the island last year.” It was always part of our business, especially for four and five-star properties that were only trying to cater for traditional holidaymakers, but to stay open all year round. And this is only possible if you have conference facilities.

“Certainly from June, the occupancy of the island’s hotels increases so much that they are not easily able to offer availability for incentive groups. But still, the focus for corporates lasts for the entire year, and there are some opportunities for incentives in the summer months as well.”

Recently, Mallorca has taken some big steps to further attract the interest of international meetings and events planners. Perhaps the most important development over the past three years is the increased connectivity of the Balearic island via low-cost carriers and legacy airlines alike. These include British Airways, which now flies to Palma de Mallorca throughout the year from Heathrow, London City, Stansted and Manchester. Meanwhile, Norwegian, Easyjet, Monarch and Thomas Cook all offer routes to the Mallorcan capital from Gatwick.

“There are many more flights to the island than before,” says Boda. “Previously, event planners often had to charter their own flights, or find solutions from numerous airlines. Now it’s easier to receive corporate groups from the UK, from German-speaking countries, France and Scandinavia.”

What’s more, there are plans for a further €229 million investment in Palma de Mallorca’s Son Sant Joan airport. The third-busiest airport in Spain - after Madrid and Barcelona - the gateway to Mallorca is often rammed with lengthy queues of people at passport control. And the airport experienced its busiest ever day in July, with more than 180,000 passengers and almost 1,100 flights in just 24 hours.

With its annual passenger numbers predicted to rise from 26 million to 28.5 million by 2021, Son Sant Joan airport needs to grow. It will increase its hourly number of flights from 66 to 80 (so a plane will take off every 45 seconds). Its development plans comprise of increasing the surface area of the terminal to improve passenger comfort; adding additional corridors, moving walkways and escalators; renovating one of its runways and modernising its luggage-handling system. The end aim is for the airport to be able to accommodate up to 34 million passengers each year.

Aside from aviation, Mallorca has been working hard to give its hotel offering a muchneeded facelift fit for international business guests. (see box below). “Many five-star hotels have opened here, but rather than small boutique properties, we’ve gained hotels with more than 100 rooms and conference facilities,” says Boda. “And all of them have proper marketing and sales structures for spreading the news that Mallorca is an excellent destination for incentives.”

An emblem of its ambitions, the Mallorcan capital gained its first convention centre in April. Operated by national hotel chain, Melia, Palau de Congressos is set along Palma’s Paseo Maritimo seafront, just ten minutes from the airport. Designed by Spanish architect, Francisco Mangado, the long, cubic yet flowing structure is intended to represent a “beached fish”. Complete with a “hanging garden”, a restaurant with a sea-view terrace and plenty of natural light, Palau de Congressos is ready and able to welcome 2,400 delegates for a congress.

Also in April, the Mallorcan town of Calvia hosted the first ever international Smart Island World Conference. More than 400 international experts – island leaders, governments researchers and universities – came to Mallorca to debate and devise new ways for island nations to develop and secure their future prosperity, and the same conference will also return to Mallorca next year.

The term “smart island” may not be one you automatically associate with Mallorca, but sustainability and sensible development is definitely on its agenda. For example, Mallorca is planning to shut down its most carbon-emitting coal and gas power station in stages by 2020. Meanwhile, the Balearic islands – Mallorca, Menorca, Ibiza and Formentera – are working to increase their combined renewable energy facilities so that clean sources comprise 10% of all the islands’ energy by 2020.

In addition, at a time where many European destinations are tackling over tourism, and trying to strike a balance between welcoming the world and retaining their local culture, Mallorca makes for an interesting case study. With demand on its services increasing, and many avenues of tourism to explore, Mallorca needs to use its space wisely. Its future will certainly be interesting.

MALLORCA: INCENTIVES IN BUCKETS AND SPADES

TOP FIVE PLACES FOR A MEETING/EVENT

Set in a valley to the northeast of the island, this beachfront five-star hotel has 142 rooms and suites, a spa and meeting facilities. “Our high-ceilinged ballroom can hold up to 200 people and has the latest high-tech equipment, daylight and a terrace for

welcome cocktails,” says Boda. “The hotel also has a conference centre with eight board rooms, which are all connected by a typical Spanish garden and a private restaurant with an open show kitchen. We can also offer private dinners on the beach.”

A 20 minute drive from Palma de Mallorca, this exclusive seafront luxury resort has nine well-presented event spaces, from boardrooms to a 224 sqm room for keynote speeches or banquets. There are four restaurants – one with a Michelin star – a spa specialising in Chinese medicine, a golf academy and 125 airy rooms and suites.

Dating back to the early 17th century, this sandstone tower of this fortress-turned military museum has spacious walled courtyards for open air drinks receptions or concerts. Its galleries presenting weaponry through the ages can also be hired.

This four-star Puerto Azul Suite hotel is particularly popular with cyclists during spring, and would be ideal for a physical corporate retreat. Its 148 rooms were recently refreshed, plus there’s a tranquil outdoor pool area, and the nearest beach is 100 metres away.