Banking on Shakespeare for the Guildford community

Peter Quilter, NatWest's Director of Corporate and Commercial Banking in Surrey, was inspired by the outreach work by The Guildford Shakespeare Company.

READ NEXT
How to reduce crime in Surrey 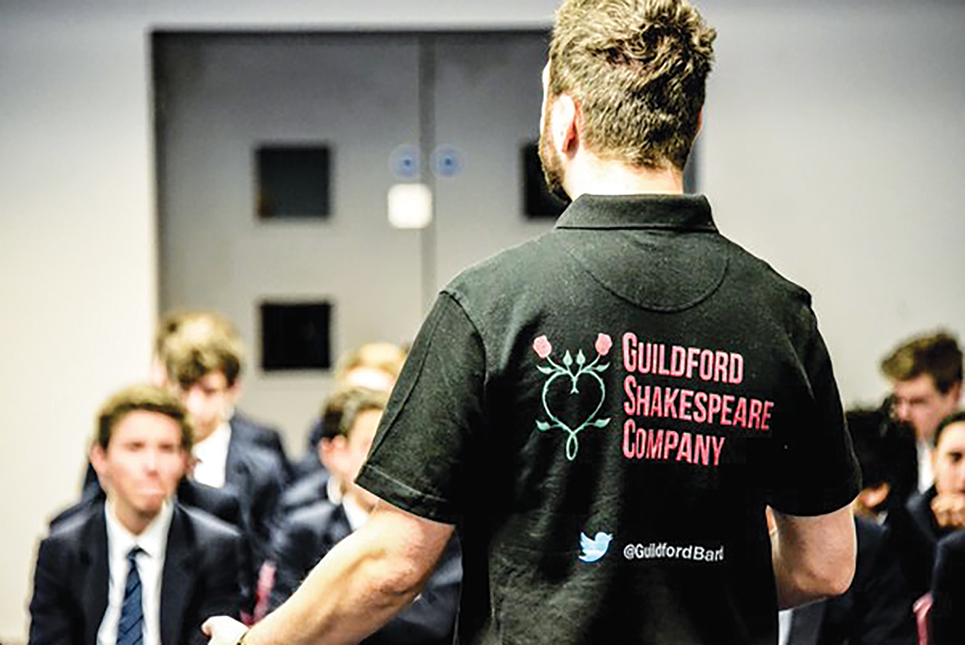 It started as so many things do at a networking event run by Surrey Chambers of Commerce – an introduction to Matt Pinches of The Guildford Shakespeare Company (GSC). Established in 2006, GSC is an award-winning professional theatre company, a registered charity and one of the largest producers of home-grown theatre in the region. They also run a huge range of in-house education classes, develop community outreach projects and work with schools across the South East.

I attended a performance from the company and liked it so much that I came back two days later with my family. When I spoke with Matt and co-founder Sarah Gobran, they asked, rightly: “If you enjoyed it so much and you have not seen Shakespeare since school days, what about telling your corporate clients?”

It is true that many of us studied Shakespeare at school  – and many of us did not always enjoy the experience! However, Guildford Shakespeare’s performances are top-notch professional productions that connect the very human issues in the plays, linking the 16th Century and the modern world.

We, at NatWest Corporate and Commercial Banking in Guildford, sponsored our first performance in 2016 – The Taming of the Shrew – and brought along customers who were delighted. Matt and Sarah can confirm they have since been back for more.

Thus the arts and the business community are all working together, alongside other sponsors such as Projectfive, Surrey Chambers of Commerce and Charles Russell Speechlys. We have all found out to our advantage that bringing our contacts and customers along to Guildford Shakespeare’s productions has been most rewarding.

In particular the team learned about the company’s work with schools and an idea was born – could the bank sponsor a day where Guildford Shakespeare Company would work with a school that had not been able to be involved before and probably could not going forward? Young people would see the text brought alive as never before and be inspired in their English and drama studies.

As Matthew Pinkett, their Head of English explains: “Literacy levels are low. Lots of children come in to Year Seven below the required standard for reading and writing. Some children, aged 11, come in with a reading age as young as six. The fact that many of these children come from families of low socio-economic status (SES) means that the materials needed for adequate development at home cannot be accessed. Currently the number of children listed as Pupil Premium at the school is 45%, which is far above the national average.”

One of the bank’s apprentices went along to be part of the day (although was not asked to get into costume!). This included workshops and an interactive 80-minute performance of their GCSE Shakespeare text, Macbeth. A few volunteers took roles in the performance, including the three witches and Duncan, the murdered king. The session was then concluded with a practical Q&A with the actors. This was all delivered to 96 students and staff in the most dynamic, thought-provoking and engaging way.

The response from the pupils is best described by Matthew Pinkett: “For students who were lacking in so-called ‘high-brow cultural capital’ experiences, seeing Shakespeare in performance had immeasurable benefits. However, those that can be measured include renewed enthusiasm for their GCSE Shakespeare text, just prior to the exam season, and a greater understanding of the play’s plot, character relationships, and key scenes.”

GSC and King’s College are already planning further projects. Their English and Theatre Studies departments envisage three ‘projects’ for the future. “We’d like to offer 300 minutes of GSC Shakespeare workshops for every year of KS3, and another 300 minutes across the two years at GCSE,” explained Matthew Pinkett. “This would acquaint students with the language of Shakespeare, which could impact positively on GCSE results in Year 11, but will also increase student confidence in working with, engaging in, and studying Shakespeare. I’d also like to run a Shakespearean Actors workshop for students in Year Nine, who have shown a particular interest in Shakespeare. Finally, I’d like to put together a mini Shakespeare festival comprised of performances from some of our disadvantaged pupils. It’d be great if GCS could assist here.”

One office of one local bank has enabled this small  – but first of its kind – project to happen in sponsoring a GSC workshop at a school but the key question remains: “are there other leading businesses in Surrey who would like to bring the arts into a school and inspire students?” – if so, Matt and Sarah would be delighted to hear from you.