Business Travel - A guide to Rome

For business travellers visiting the Italian capital, a major gain was the opening of the largest congress centre in Europe in 2016 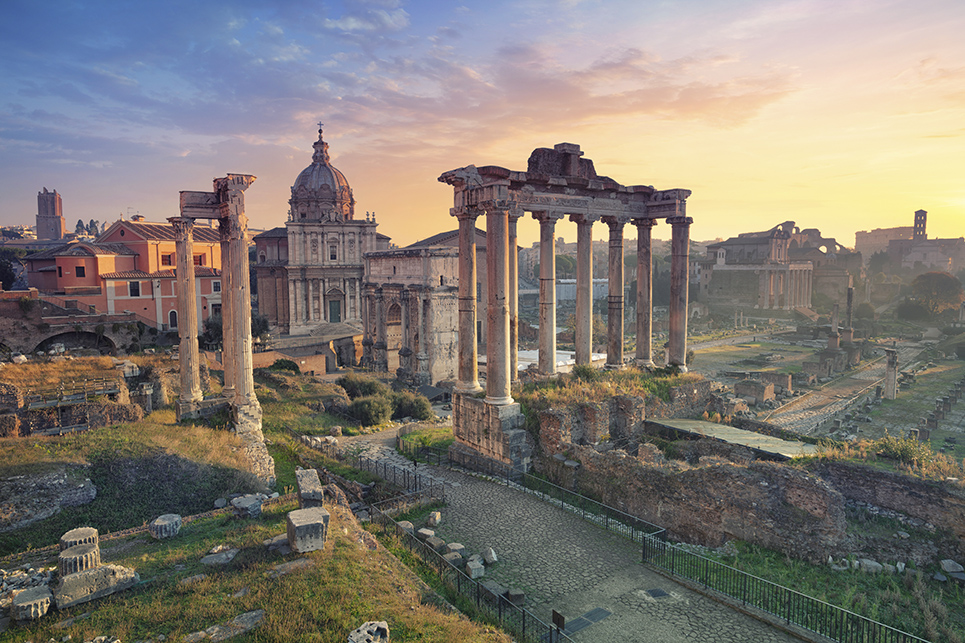 In Osteria da Fortunata restaurant (along the cobbled Via del Pellegrino) a white t-shirted chef sits facing out of a warmly-lit window. In an almost meditative state, she slices sheets of butter-yellow pasta into strips, twists them into strozzapreti-shaped pieces and places them in a simple paper lined tray. Moments later, these will be boiled, piled into plain terracotta bowls and served up to the diners crammed along the benches of the bare wooden tables. The queue trails out of the door, on this wintery evening, as it does every night of the week.

Rome’s effortless charm lies in its confidence in its traditions; it knows it is one of the most desirable cities on the planet. Every corner you turn leads to something astounding: from secret gardens that could be straight out of oil paintings to magnificent Roman architecture – the relics of the one of the most powerful empires the world has ever known. With its past such a visible part of the city’s fabric, Rome provides one of the most staggering cityscapes in Europe for corporate events, along with innovative facilities that keep on evolving.

For business travellers visiting the Italian capital, a major gain was the opening of the largest congress centre in Europe in 2016. Known as “La Nuvola” (the cloud), Roma Convention Centre was 18 years in the making, following an investment of €240 million. A gigantic glass cube of a building in the heart of Rome’s EUR business district, Massimiliano Fuksas, the architect behind La Nuvola, describes it as: “an ode to transparency.”

In terms of hotels, Rome is enjoying some exciting additions, including a second Rocco Forte hotel – Hotel de la Ville – which was set to open its doors at the time of going to press. “Located on top of the Spanish steps, the newest addition to the Rocco Forte

Hotels portfolio in Rome will offer an ideal mix for business travellers: an ideal location, six different food and beverage offerings and several meeting and banqueting spaces – amongst them a 400 sqm courtyard and a private terrace with spectacular views over Rome,” says Martin Elsner, general manager of Rocco Forte Hotel de Russie. Also coming in the very near future is the First Roma Dolce, part of Preferred Hotels group. The property will be housed in a 19th-century building along the iconic Via del Corso, with 23 rooms and suites – some with in-room libraries and fitness centres – offering inspiring contemporary interiors that would set the right tone for a product launch or private meeting.

Last year, Rome Fiumicino was named the World’s Most Improved Airport by Skytrax. In 2015, plans to invest €12 billion by 2044 in revitalising the airport came into play, and the results are already starting to show. The aim of the investment was to enhance travellers’ end-to-end experience, encourage self-service and boost technologies that track passenger flow through the airport. So far, the airport has gained a new boarding area and the extension of Terminal 3 has been completed, adding 90,000 sqm of space for passengers. This year, work on a new baggage hall for Terminal 1 will be completed, and a fourth terminal will also be added in the future, all of which will help accommodate the airport’s forecasted 50 million annual passengers by 2021. Fiumicino’s grand plans also include launching high-speed rail links to Florence, Bologna and Venice, encouraging domestic travellers to fly via the Italian capital rather than turning to European hub airports outside of the country (such as Paris Charle de Gaulle and Frankfurt).

While Rome’s confidence in its appeal for international travellers is justified, the Italian capital recognises it must move with the times to compete with the fresh facilities of other European business hubs. Fortunately, long-term infrastructure investments are starting to take shape, and the Eternal City is ever-changing to meet the demands of corporate travellers.

Top Places for a meeting or event

The capital’s game changing new conference and exhibition venue is truly cutting edge, with some sizeable spaces, including the glass-walled plenary Forum that can seat 5,000 people for a gala dinner, and the 1,800-seat auditorium.

Opened in the early 19th-century to welcome Russian aristocrats, the courtyard of this oasis-like property has always been a hub for exchanging ideas. Its signature suites pay homage to its famous guests; my favourite is the stunning Picasso suite, which would be ideal for a private meeting.

“Our tiered Secret Garden can be hired for private events, launches, welcome drinks and celebrations for up to 100 guests,” says Elsner. “For team building purposes, our catalogue includes Renaissance walking tours, exclusive private tours of the Vatican, the Colosseum or the Roman Forum, or exploring atmospheric districts such as Trastevere and the Ghetto.”

Designed by Zaha Hadid, this award-winning piece of architecture is a feast for the eyes. Italy’s first museum dedicated to “contemporary creativity” has some unforgettable spaces for corporate events.

What does the impact of corporate wellness programmes and natural remedies have on personnel health and business performance? Kevin...

13 Printing for small businesses: Why digital is the way to go

Every business large or small – even paperless offices, should they actually exist – has print requirements. Whether you’re...