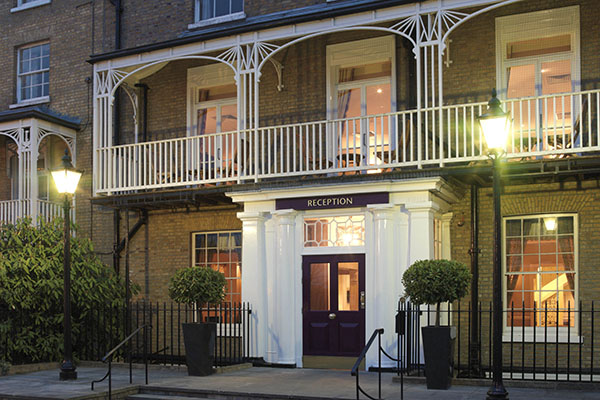 This has long been one of my favourite out-of-London hotels, loved for its beautiful location, calm atmosphere and friendly staff. Therefore I was somewhat worried when invited back to review as they had just completed a major refurbishment and we all know how that can radically change the feel of any hotel.

The Richmond Hill Hotel was built in 1726 and is full of Georgian charm. Situated at the top of Richmond Hill with far-reaching views over the Thames and the rolling fields of Surrey, and right next to the most famous ‘back garden’ imaginable – Richmond Park. This Royal Park, which covers 2,500 acres, was first named the Manor of Sheen by King Edward in 1292, and then Richmond Park by King Henry Vlll, when he closed it to the public and designated it as his personal hunting ground.

After much public outcry, he allowed the public to have a right of way across the land and to this day, that right still exists. The park is full of red and fallow deer and is a stunning area, unbelievably close to the centre of London. It is also close to Kew Gardens, Hampton Court, Ham House and Twickenham Rugby stadium. 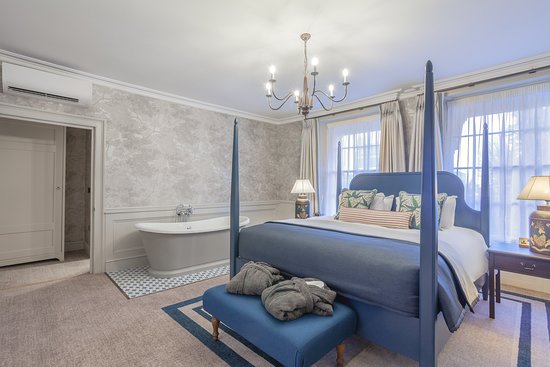 My concerns dissolved upon arrival as they have done a great job on the refit and the staff, if anything, have got even friendlier. We were shown to the Georgian Suite, a huge south facing suite with sitting room, bedroom and a huge bathroom with a tub for the whole family. It is over 50 square metres of space and with the Armani wallpaper, free-standing roll top bath, four poster super-king bed, goose down duvets and a full separate sitting room, it was a joy.

My view was over Petersham Meadows on the banks of the Thames, famously captured by the artist JMW Turner, a painting that currently adorns the walls of the Tate Britain gallery.

The 130 bedrooms have all been refurbished and it is beautifully done, and no two bedrooms are the same. From cosy to huge, they are all well-equipped and have a personality all their own.

There is a range of 13 conference and meeting rooms accommodating from five to 250 guests including the ballroom, a perfect room for large meetings, events and weddings.

On the way to dinner, l noticed that the designer has created a large number
of nooks and crannies in which to drink and chat that feel private but are not, and all are beautifully furnished with a range of elegant, eclectic furniture around a range of roaring fireplaces.

The new dining room is designed by the renowned Russell Sage Studio and called 144 On the Hill. It has now become a destination restaurant serving ‘Turf to Table’ menus full of local seasonal dishes and British classics. I am relieved that it is not pretentious. I hate pretentious restaurants where you are made to feel that they have done you a favour by letting you in!

144 On the Hill is the antithesis of that. Warm, friendly service, a relaxed atmosphere and staff that cannot do enough for you. I enjoyed a rare Breed Pork Chop with caramelised apple, red cabbage and roasting juices while my other half tucked into Grilled Mackerel with tomato emulsion and kalamata olives. I always find the sign of a good meal is silence - and we were, oddly for me, silent as we enjoyed the delicate flavours.

For pudding, l enjoyed the roasted Fig pana cotta with cinnamon, figs and candied nuts and my companion demolished the Baked Alaska with vanilla and blackcurrant, all washed down with a scrumptious Chablis Grand Cru. Really, nothing to say here but yummy. The new cocktail bar reminds me of a funky New York bar with experienced cocktail makers and a vast range of drinks. The whole thing was a fabulous evening topped off with knowing that we were to return to the room. We slept like the dead and if l could, l would have put the bed in my bag and stolen it.

I love hotel breakfasts in bed but had forgotten to put the order form out (l blame the Chablis). No problem they said in the morning and the full order, with nothing missing (the bane of my life) arrived quick smart on a silver tray and was perfectly laid out on the table on the sitting room.

There is also a large terrace outside when the weather improves, a car park on site and, if this matters to you, you are round the corner from Mick Jagger’s Downe House and directly opposite Pete Townshend’s house The Wick. Oh, and it’s less than 30 minutes to central London.

This used to be one of my favourite hotels outside of London and l am absolutely delighted to say that it still is - and then some.

What is SurreyIDEA and what is its mission?SurreyIDEA is the Surrey Innovation and Digital Enterprise Academy and our mission is to...