READ NEXT
Does intuition pricing pay off? 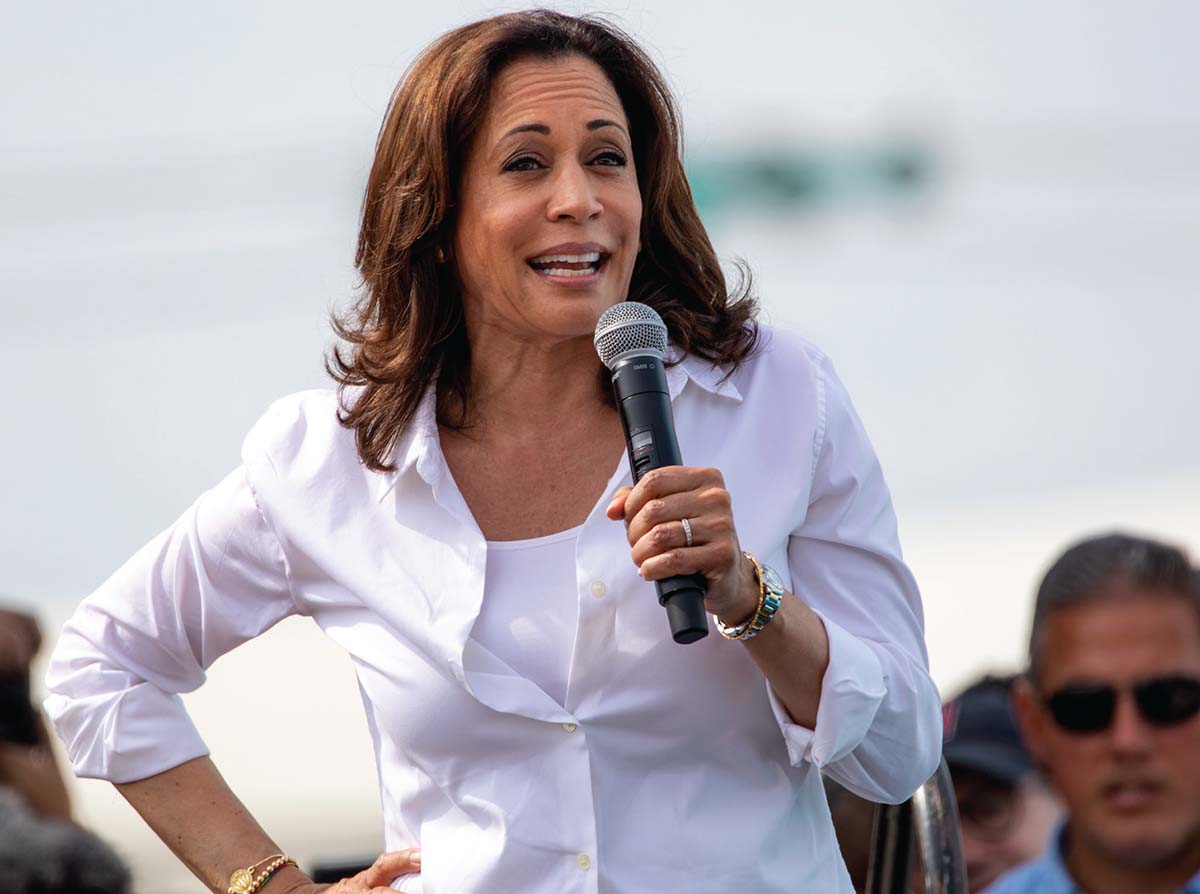 Should many of the pundits be correct in the assertion that Biden will not see out the first four years, whether from age, illness or choice, Kamala Harris will make history in too many ways to count.

Kamala Harris savoured the moment she became the first woman, and the first black and Asian American, to be vice president-elect, with a very hearty laugh.

In a video posted to her social media she shares the news with President-
elect Joe Biden: “We did it, we did it Joe. You’re going to be the next president of the United States!” Her words are about him but the history of the moment is hers.

Just over a year ago, as the senator from California hoping to win the Democratic nomination for Presidency, she launched a potent attack on Joe Biden over race during a debate. Many thought it inflicted a serious blow on his ambitions. But by the end of the year her campaign was dead and it was Mr Biden who returned the 56-year-old to the national spotlight by putting her on his ticket.

“It is a big reversal of fortune for Kamala Harris,” says Gil Duran, a communications director for Ms Harris in 2013 and who has critiqued her run for the presidential nomination.

“Many people didn’t think she had the discipline and focus to ascend to a position in the White House so quickly... although people knew she had ambition and star potential. It was always clear that she had the raw talent.” What she has demonstrated from the moment she took the national stage with her pitch for the presidency – is grit.

Born in Oakland, California, to two immigrant parents – an Indian-born mother and Jamaican-born father – her parents divorced when she was five and she was primarily raised by her Hindu single mother, Shyamala Gopalan Harris, a cancer researcher and civil rights activist.

She grew up engaged with her Indian heritage, joining her mother on visits
to India, but Ms Harris has said that her mother adopted Oakland’s black culture, immersing her two daughters – Kamala and her younger sister Maya – within it.

“My mother understood very well that she was raising two black daughters,” she wrote in her autobiography The Truths We Hold. “She knew that her adopted homeland would see Maya and me as black girls and she was determined to make sure we would grow into confident, proud black women.”

Her biracial roots and upbringing mean she embodies, and can engage with, many American identities. Those parts of the country which have seen rapid demographic change, enough change to alter a region’s politics, see an aspirational symbol in her.

But it was her time at Howard University, one of the nation’s pre-eminent historically black colleges and universities, which she has described as among the most formative experiences of her life.

Lita Rosario-Richardson met Kamala Harris while at Howard in the 1980s when students would gather in the Yard area of the campus to hang out and discuss politics, fashion and gossip. “I noticed she had a keen sense of argumentation.”

They bonded over an aptitude for energetic debate with campus Republicans, their experience growing up with single mothers, even just both being the Libra star sign. It was a formative era politically too.

“Reagan was president at the time and it was the apartheid era and there was a lot of talk about divestiture with ‘trans Africa” and the Martin Luther King holiday issue,” Ms Rosario-Richardson says.

“We know that, being descendants of enslaved people and people of colour coming out of colonisation, that we have a special role and having an education gives us a special position in society to help effect change,” she explains – it was a philosophy and a call to action that was part of the university experience Ms Harris lived.

She returned to address students at Howard in 2017 and took them on a journey from the Ferguson race protests of 2014 to the halls of Capitol Hill in just one sentence:

“You students have joined the fight for justice - you protested. From the streets of Ferguson to the halls of the United States Congress, you have lived the words of James Baldwin, ‘There is never a time in the future in which we will work out our salvation. The challenge is in the moment, the time is always now.’

But Ms Harris also operates with ease in predominantly white communities. Her early years included a brief period in Canada. When her mother took a job teaching at McGill University, Ms Harris and her younger sister Maya went with her, attending school in Montreal for five years.

Ms Harris says she’s always been comfortable with her identity and simply describes herself as an “American”.

She told the Washington Post in 2019, that politicians should not have to fit into compartments because of their colour or background. “My point was: I am who I am. I’m good with it. You might need to figure it out, but I’m fine with it,” she said. In 2014, Senator Harris married lawyer Doug Emhoff – now a fixture at her campaign stops – and became stepmother to his two children.

Last year she wrote an article for Elle magazine about the experience of becoming a stepmother and unveiled the name that would then come to dominate many headlines that followed.

“When Doug and I got married, Cole, Ella, and I agreed that we didn’t like the term ‘stepmom’. Instead they came up with the name ‘Momala’.”

They were portrayed as the epitome of modern American “blended” family, an image the media took to and one that occupied many column inches about how we talk about female politicians.

On becoming vice president-elect, she is unlikely to lose this nickname but many argue she should also be seen and recognised as the descendant of another kind of family and that is the inheritor of generations of black female activists.

But from the very earliest, as her friend Ms Rosario-Richardson attests, she showed the skills that allowed her to be one of few women to break through barriers.

“That is what attracted me to get her to join the debate team at Howard University, a fearlessness.”

Wit and humour are part of that armoury. The laugh she greeted the president-elect with, when making that first momentous phone call, was one her friend recognised immediately and intimately.

“It clearly shows her personality, even in the short time she has been on the campaign trail.”

The ability to deliver zingers to her opponents in live debate was very much part of the momentum behind the start of her bid for the Democratic presidential nomination. She wasn’t afraid of confrontation as in this Twitter exchange with Donald Trump Jr last October.

“Why is @KamalaHarris the only person that laughs at her jokes... always way too long and way too hard?” Mr Trump’s son asked.

“You wouldn’t know a joke if one raised you,” she wrote back.

A simple burn on social media, but a popular shorthand for the kind of skills that meant a career in law and politics was a natural fit. Although her career as a prosecutor is what made her a politician, it brought with it political benefits and risks.

She began work in the Alameda County District Attorney’s Office and became the district attorney - the top prosecutor – for San Francisco in 2003, before being elected the first woman and the first black person to serve as California’s attorney general, the top lawyer and law enforcement official in America’s most populous state.

She gained a reputation as one of the Democratic Party’s rising stars, using this momentum to propel her election as California’s junior US senator in 2017.

But straddling the line between pleasing left-leaning California Democrats and being a politician for a nation where the left does not decide who gets to be president has been hard.

She gained favour among progressives for her acerbic questioning of the
then Supreme Court nominee, Brett Kavanaugh, but as a presidential candidate for the Democratic Party her adept debate performances were not enough to compensate for poorly articulated policies. Walking the fine line between the progressive and moderate wings of her party, she ended up appealing to neither.

Despite leftward leanings on issues like gay marriage and the death penalty, she faced repeated attacks for not really being progressive enough.

“Kamala is a cop” became a common refrain on the campaign trail. But
those same law enforcement credentials proved beneficial on the national stage when Democrats needed to win over more moderate voters and independents.

She was “someone with a law enforcement background, and perceived in her own state as being insufficiently progressive... and trying to project an inauthentic self”, it was stated “that looks very different in a vice presidential slot”.

As the US grapples with an ongoing racial reckoning and there is scrutiny over police brutality, Ms Harris has taken a front row seat, using her sizeable microphone.

On talk shows she calls for changes to police practices across the US, on Twitter she calls for the arrests of the police officers who killed Breonna Taylor, a 26-year-old African-American woman from Kentucky, and she speaks frequently about the need to dismantle systemic racism.

She has the law enforcement background but she has often said that her identity makes her uniquely suited to represent those on the margins.

Now she has the chance to do just that and from inside the White House.

2009 “Smart on Crime: A Career Prosecutor’s Plan to Make Us Safer” is published.

December 5, 2018 Accepts the resignation of Larry Wallace, a senior aide, after accusations of harassment surface from the time that he worked with her at the California Department of Justice.

January 8, 2019 Harris’ memoir, “The Truths We Hold: An American Journey,” and picture book, “Superheroes Are Everywhere,” are published.

January 21, 2019 Announces she is running for president in a video posted to social media at the same time she appears on ABC’s “Good Morning America.”

On the evening of November 12th, Surrey Chambers of Commerce held a virtual event, where we gathered to recognise some Magnificent...

33 How to plan for uncertain times

No-one really knows what the next few months will bring. Common sense suggests the current global pandemic is likely to create more...