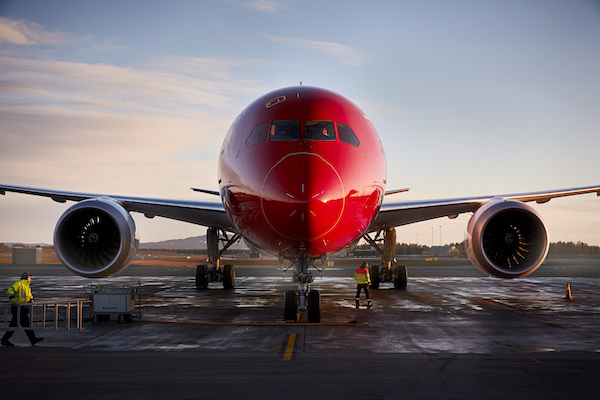 Norwegian was voted the world’s most fuel-efficient airline on transatlantic routes in 2015 and 2018 by the International Council on Clean Transportation (ICCT) and since 2008, the airline has reduced its emissions by 33% per passenger kilometre thanks to new, fuel-efficient aircraft. Contributing to a sustainable future for the aviation industry is at the heart of the Norwegian ethos and it is something that the airline is taking action on today – Norwegian calls it ‘flying smart’.

As part of ‘flying smart’ the company only operates the newest and most fuel-efficient aircraft across their global network. The airline’s Head of Sustainability, Anders Fagernaes, clearly sees a direct correlation between the low-cost business model and reducing emissions. “Flying brings people together and is of great value to society.

But flying also comes at a cost to our environment. At Norwegian we fly smart, with one of the newest fleets in the industry. Our low-cost business model reduces fuel and resource consumption – cutting both ticket prices and carbon emissions at the same time.”

Sustainability does not have to come at a premium for either the industry or passengers. Norwegian customers only pay for what they consume and direct flights use less fuel and reduce net emissions. The low -cost business model is based on low fares which in turn means a higher load factor on every flight and therefore lower emissions per passenger. Norwegian does not have flat beds on long-haul nor does it have drop down flat screens on short-haul, further cutting weight, fuel consumption and reducing both net carbon emissions and emissions per seat. Norwegian firmly believes the low-cost business model is the sustainability model of the future.

In addition to being technically highly trained, Norwegian pilots are great energy managers, always trying to find ways to fly even smarter. Advances in technology such as using aircraft sensors, advanced weather data, and big data analysis to inform pilots on how to reduce fuel consumption before and during the flight have had a significant positive impact on fuel consumption and emission levels. After each flight pilots receive feedback on their performance which is sent straight to a specially-tailored phone application, advising them on how to fly even smarter. By flying smarter Norwegian pilots can save up to 2% of Norwegian’s entire fleets fuel consumption, equivalent to 140,000 tonnes of CO2 emissions per year and the use of advanced weather data can cut 30,000 tonnes of CO2 emissions per year.

Norwegian has partnered with climate company CHOOOSE to make it easy for passengers to offset their carbon footprint when buying a ticket. Additionally, the initiative has been welcomed by the United Nations Framework Convention on Climate Change (UNFCCC). Anders Fagernaes is clear that there is consumer appetite to offset carbon emissions. “Carbon offsetting is an important tool in managing today’s emissions, and we know that many of our customers would like to compensate for emissions associated with their journey.”

Norwegian developed the feature to be as informative, simple, and trustworthy as possible. When first selecting a flight, Norwegian informs customers how its flights’ emissions compares to industry average. The CO2 emissions calculation is based on the official methodology of the United Nations’ International Civil Aviation Organisation (ICAO), the International Council of Clean Transportation (ICCT) and Norwegian’s own flight emissions data.

Even if commercial aviation technology continues to develop and Norwegian keeps reducing its environmental impact, emission- free flying is not possible today, but ‘flying smarter’ is a reality that has a tangible and immediate positive impact on sustainability.