READ NEXT
Take the leap 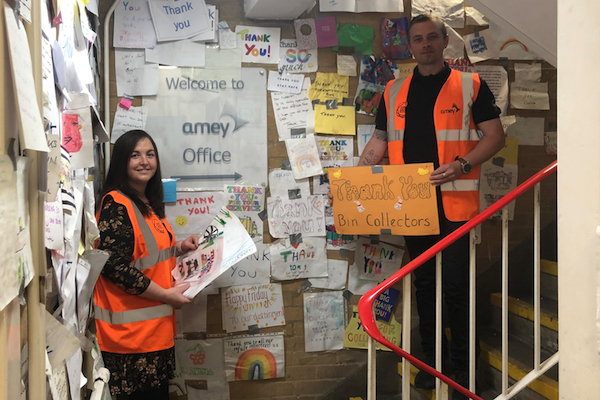 Amey, the UK’s infrastructure specialist and waste collection contractor for four Surrey districts, has a proven track record in attracting the brightest and best former Armed Forces personnel. Nicola Blake is no exception.

The Account Director for Amey’s Waste Collections Services Team in Surrey explains why she swapped barracks for bins, and how supporting the local community is as rewarding as supporting her country.

‘I’ve always been incredibly driven’, explains Nicola, who runs a team of 370 people at Amey responsible for collecting the waste of 168,000 homes across Surrey. ‘Even as a teenager, I would focus on what I wanted and stop at nothing until I got there.’

On leaving school, Nicola wanted to attend university. Her parents, however, were not in a position to support her financially. Exploring her options, she discovered that by joining the military she could apply for university sponsorship.

Within weeks, Nicola had enrolled onto the Army Reserves programme – formerly known as the Territorial Army – as a driver.

‘I had no military experience whatsoever, so it was a huge learning curve. What I learned most of all was just how much I enjoyed it.’

Instead of working towards a degree, Nicola decided to pursue the Association of Chartered Certified Accountants qualification in tandem with her passion for the Reserves. Halfway through her training she received some news.

‘It was 2003 and the Reserves had been mobilised’, continues Nicola. ‘As part of my commitment, I found myself flying out to Iraq.’

As an army driver, Nicola spent seven months transporting food, water, and ammunition from the main operating base in Kuwait to smaller operating bases where frontline troops were stationed; a job she relished from day one.

‘It was a great experience. Although it made me realise that a life behind a desk was not for me.’

Fortunately, whilst in Iraq, Nicola had received a recommendation to apply to Sandhurst to attend selection for officer training. Deciding to leave accountancy behind for a career in the military, she passed the selection process and embarked on a training programme alongside fellow Sandhurst trainees including Princes William and Harry.

In 2010, long after passing out as a Commissioned Officer, she was called upon for a tour of Afghanistan, where she ran force protection for the capital of Kabul during the elections – a politically charged and unstable time. ‘By day three our accommodation had been blown up’, recalls Nicola. ‘By day five, two of my soldiers had been seriously injured; it was a very tense time.’

However, this second tour would be very different. Not long after arriving, her friend – an explosives expert – was killed by a rigged device. She was the first female officer to be killed in Afghanistan. ‘It was a huge shock’, reflects Nicola.

Returning home, Nicola took advantage of the Armed Forces’ training package, gaining a qualification in project management - a step that would land her a management role at Woking’s Royal Mail delivery office.

‘Whilst very different to the Army, it wasn’t without its challenges. Royal Mailemployeesareadifficultcrowd to win over and the organisation is heavily unionised. You quickly learn how to get the best from a diverse range of people.’

After five years, during which time she was promoted to Area Manager, running 22 delivery offices across South East London, she decided it was time to move on. It wasn’t long before she secured a position at Amey.

Since her appointment, she has reduced lost time through injury by 80%, increased employee engagement by 82% and restructured the team, which has seen an increase in the number of female employees.

‘I take great pride in delivering results, which is undoubtedly rooted in the resilience and leadership I developed during military training’, explains Nicola. ‘Another advantage of working at Amey is that it’s as committed to delivering social value as it is to collecting waste.

Since I started in 2018, me and my team have delivered 50 volunteer days, which has seen us mentor ex- military personnel across Surrey through a partnership with SSAFA, the Armed Forces charity, which is close to my heart.’

Nicola’s social value work, which supports Amey’s Social Value Plan, also extends beyond SSAFA. Earlier this year she helped 1,500 Surrey schoolchildren become ‘Junior Citizens’ by holding a series of interactive workshops to engage young people on the importance of recycling. She is also establishing partnerships with charities including Dorking Refugee Support, which could see Amey provide opportunities for refugees and other vulnerable people in the business.

Although her days of military are over, Nicola and her keyworker team now face a different type of war in the form of Covid-19, which is attracting support from the Surrey community.

‘We’ve been really moved by the volume of letters and beautifully designed pictures from people as young as three, all of whom live on our collection rounds’, continues Nicola. ‘To see our appreciation wall grow every day has brought us close to tears.’

Amey’s response to Covid-19 doesn’t end there. Her team have also doubled as delivery drivers, transporting critical medication to vulnerable adults. So, what’s next for someone so motivated?

‘I’m very happy where I am’, laughs Nicola. ‘There’s so much to do and this, combined with Amey’s commitment to supporting the communities in which it operates, means that there are endless opportunities for me and my team to do good things.’

Nicola, we salute you.

To find out more information about a career at Amey and its commitments to social value, visit www.amey.co.uk