READ NEXT
Recognising ADHD in women 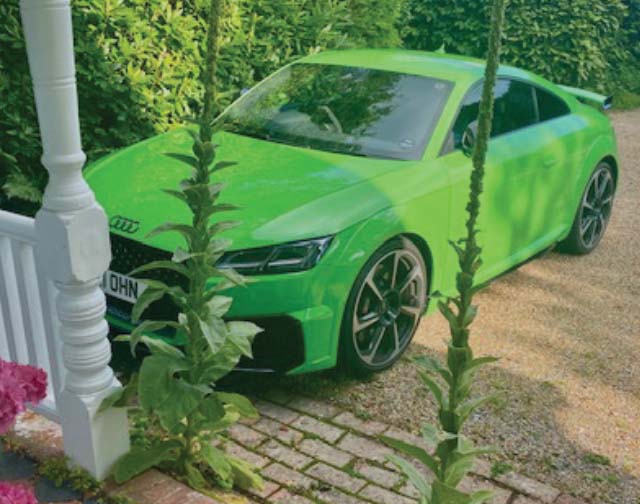 Whilst one might think that driving and reviewing a wide range of new and thrilling cars is one of the key perks of writing for Dynamic, it is actually the questions that arise from these experiences that are at times – equally (if not more) interesting and important for the potential purchaser.

As a result of a last-minute handover of the Audi TTRS Coupé with Maarten, I had not received the Advance Technical Spec but only the car keys.

So, imagine my slight alarm when I found myself face to face with what can only be described as an ostentatiously neon, radioactive green car (Kyalami Green), the exact same shade as Kermit The Frog. Looking at an Audi – Sport forum, someone described the colour as like “being hit over the head with a baseball bat” – ouch.

My research into cars and their colours suggests that only the really audacious car models and their equally audacious owners can carry off such a colour – apparently Coupés can get away with bigger and brighter colours due to their sleeker exteriors and their very high performance. And one could argue that they are safer as they stand out more – more on that later...

I had 48 hours, a pair of very dark sunglasses and the option to go incognito to review it.

Clearly, that latter was not going to happen, so my introverted nature decided to embrace my inner Kermit and put my foot down and see what happened next.

Well, 0-62 mph in 3.7 seconds is what happened next, which almost made my eyebrows fall off, leaving most normal mortals transported somewhere into another time warp or into the boot or in my case, Sainsbury’s car park in Royal Tunbridge Wells.

It is faster than a Porsche 911 Carerra 4S out of the traps – which is saying something.

With Aerosmith playing on the seriously fabulous B&O sound system, the mischievous imp in me thought that it would be a good ruse to drive up the A26, through and around the notable spa town of Royal Tunbridge Wells, to see if the “disgusted of Tunbridge Wells”  Telegraph readers might lose all control of their Conservative faculties as I whizzed by, the vibrations from the roar of the Audi sending slices of lemon and ice cubes akimbo from their gin and tonics.

Having driven a bright red Audi TT by accident a few years ago as it was the only hire car available at the time, I am not a stranger to this “colour anxiety “ and it also gave me a chance to live out a basic Audi TT experience. Fun, fast and great for motorway driving but I also found it very light to drive and whilst I am sure this added to the driving sensibilities, it also left me feeling slightly vulnerable. It did not feel solid.

I had a slightly enhanced experience of this with the RS, whilst it handles well on firm, smooth and dry surfaces, I felt a lot less confident on more uneven rural roads. The RS carries more than 60% of its body weight over the front axle and its rear weight distribution is more like a proper hot hatchback than a sports car. It sits 10mm lower than the standard TT as well and I kept on having to look at the tyres as they were so low profile as to be almost non-existent.

Returning to car colour, I ended up researching this out of curiosity. Black is the top-selling colour in 2021, followed by grey. New car sales tend to be grey, black and white – all conservative colours, which can apparently help hold a car’s value. Interestingly, the most exciting it got was orange being the seventh most popular colour but it had to be a burnt orange and not a “stand out and shout at you” neon orange. Sober colours have a broader appeal with green and yellow having a much smaller percentage of the market. Insurers will rack up premiums for “hot metallics” as the paint is far more expensive to replace after an accident – so parents (or older hipsters) take note of this. Smaller cars suit big colours better and often appeal to a younger market. And green cars are a lot less likely to have accidents than grey ones. Sorry if this is now sounding like a GCSE Maths conundrum.

Between May 2020 and May 2021, Google searches for impostor syndrome increased by 150% in the UK alone. Although these feelings have...

Why did you decide to set up your own business and is it on track to fulfil the goals you have for it, yourself and the life you want...