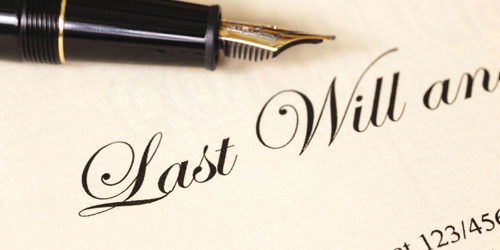 Planning for the day when you are no longer able to run your own affairs, whether due to ill health or death, is not an especially cheery topic to consider. However it is extremely important, especially if you’re a business owner (or have shares in a business) and have dependents.

Dealing with the affairs of someone who has died is called administering the estate. We often work with business owners who choose a business partner to be one of the ‘personal representatives’ (PRs) of their estate. This makes a lot of sense, as often much of an estate’s value is held in the business. Having someone who has intimate knowledge of the business can help avoid nasty surprises further down the track.

If you’re asking your business partner to be one of the PRs of your estate, or are being asked to act in the administration of someone else’s estate, it’s important to know what it entails as it involves considerable responsibility, as well as duty to the beneficiaries.

1. Locating the original will

If a person dies without a valid will, then their estate passes under what are called intestacy rules. Individuals must apply to the probate registry to administer the estate in this way as an ‘administrator’. There must be a very thorough search for any will before this application though, because if an estate is administered in accordance with intestacy rules and a will is later discovered, then the PRs can be liable to the beneficiaries who missed out.

A thorough will search would include, but not necessarily be limited to:

• Contacting any solicitors the deceased may have used in the local area.

• Placing a notice in the Law Society Gazette, requesting information about the location of the will.

• A search of the Principal Registry of the Family Division or a local district registry where the deceased may have lodged a will.

• A search of any commercial services which offer to provide a registration centre for wills.

In most cases, when a person dies an Inheritance Tax return needs to be filed (an IHT205 or an IHT400). This usually needs to be completed whether or not the deceased leaves a will, and even if there is no tax to pay. It’s important to investigate and disclose full and accurate information in the Inheritance Tax returns, as if it’s wrong, a PR may have to pay heavy penalties. The penalties are calculated as a percentage of the ‘potential lost revenue’ by HMRC as shown below:

Falling foul of the rules can have serious consequences. One recent tribunal case saw the PRs appeal against a penalty which HMRC imposed for what it judged to be a deliberate, but not concealed, declaration of the tax due in relation to the estate.

The PRs argued that the mistake, although careless, had been unintentional. And while HMRC accepted that the error had not been deliberate, they argued that a 30% penalty for carelessness should still be paid. Critically, the tribunal chose to comment that it is not the function of the tribunal, or HMRC, to relieve PRs of the results of their choice to undertake the administration of the estate without professional advice. By administering the estate without expert advice, the executors had chosen to risk the consequences of any shortcomings in their legal and accountancy knowledge.

If the administration of an estate is not carried out properly, the PRs may be subject to a devastavit claim from the beneficiaries. Devastavit is a Latin expression and when used in connection with estate administration, means the mismanagement of the estate by the administrators or executors.

Some of the reasons beneficiaries could claim devastavit include:

• Misuse, such as by using assets in their business or using the assets for themselves (where they are not a creditor or beneficiary).

• Negligence, for example failing to get in or convert the assets (in this case shares) in a reasonable time, or failure to invest the estate’s funds where there is a duty to do so.

• Maladministration, which covers paying out a legacy without reserving sufficient sums to repay the estate’s known debt. It also includes paying sums to someone pretending to have a claim when they actually don’t.

Administering an estate is a vital role and it is necessary to be aware of the numerous responsibilities that come with it. If you’re asking a business partner to take on the role for you, or you’re taking on the role for someone else, it’s important to take professional advice on the administration. This can help avoid getting both the PRs and the estate into difficulties.