READ NEXT
Shake Hands In… Quito 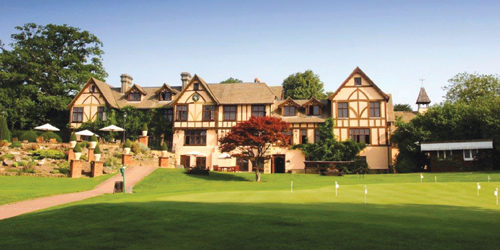 We sent David Sheppard, the Chairman of Sussex Chamber of Commerce, to try out Mannings Heath Golf Course on a cold autumn day in November, which he thoroughly enjoyed in spite of the chill. We thought it was only fair to let him enjoy a round in the sun…

On the 2nd - 4th August this year players on the PGA EuroPro tour will compete at Mannings Heath Golf Club and Wine Estate, one of 15 main events being held at some of the UK and Ireland’s premier golfing venues. There will even be a two-hour highlights package from the event broadcast on Sky Sports, and on 98 networks around the world reaching 400 million homes, launching this sleepy Horsham club into the national spotlight.

As my golfing partners (Lesley, Julie and Mark) and I sat in the outside area of the spike bar having a delicious lunch, contemplating our round on the Waterfall course on the hottest afternoon of the year so far, the EuroPro tour seemed light years away. One by one weary golfers were struggling up the path to the clubhouse from the 18th green with tales of derring-do, exhaustion and rescue with one thought in mind, the bar. It could have been a scene from the film Ice Cold in Alex with John Mills and Sylvia Sims finally savouring that perfect ice cold beer after weeks in the desert. Most disconcerting was that there weren’t any more golfers teeing off, only us, and maybe, just maybe, the members knew something about the course on a 30 degree, clear sky, afternoon that we didn’t.

This was all a far cry from my previous outing to this course for the Platinum magazine last November. The dark clouds, soggy ground underfoot, leafless trees and whistling ice cold wind, made for treacherous golfing and as I reported at the time, made a long and tiring outing which we failed to complete as the night drew in early and firework night celebrations beckoned.

Anyhow, stacked up with plenty of water, sunscreen and two buggies, we set off. Thank goodness we had the buggies or else we may well have joined the long line of the earlier walking wounded.

Our four handicaps are in the 20s-ish so this course was clearly going to be a tough golfing test. As it was, the course is beautifully laid out and kept, with trees, parkland, water hazards and lots of creeks and valleys to negotiate. However, whilst for the better golfer there were testing short cuts and long drive challenges, in most cases there was a safer, easier option for the less confident. It was clear to see why the course had been chosen for the EuroPro tour.

If you are a regular golfer you’d be thinking about such a round of golf taking around four hours. Well we took six - and not because we were losing many balls in the rough or the water or because there were other golfers on the course holding us up. It is still a long and arduous course with sometimes quite long distances between the greens and the next tee. I did love the chap who kept whizzing round us in his supercharged buggy to make sure we were ok in the heat and topping up our water supplies. We found out that this was because the “half way house” on the 11th was being rebuilt so the natural stop for refreshments wasn’t available.

As before, I particularly liked the 11th “valley” hole which (apparently) Gary Player ranked in his book as one of his top 18 holes in the world. But overall it was the variety of holes, nestled in beautifully landscaped Sussex countryside, that remains my enduring memory of the course.

This club is not a cheap option with new seven and five day members having to lay out (including the £750 joining fee) well over two grand before the first ball is hit. Perhaps however, one does have to pay for “luxury” and “exclusivity” and we all agreed this was definitely a place you would want to bring clients in order to impress them. We also felt that it was not just the golf course but the quality and ambiance of the whole facility that would particularly appeal to corporate hospitality. There is a more affordable and accessible option which is the 9 hole Kingfisher pay as you play course costing £12.50 to £24 for eighteen holes depending on time of day, day of the week and time of the year. There is also an Academy membership option which operates on the Kingfisher course.

I must mention the grand plans for the Wine Estate part of this facility as it is much in evidence from the wine events and promotions in the clubhouse and the website. Supplementing the owners existing wineries in South Africa, Mannings Heath has unique terroirs, and with the planting of 30 acres of Pinot Noir, Chardonnay and Pinot Meunier on the protected south facing slopes, it is being developed fast. The estate was lucky to miss the impact of this year’s late April frost as the first vines had only just been planted and still had their natural coating to protect them. The Estate is therefore still on track to produce its first vintage of Estate English Sparkling wine in 2023.

Anyway, we made it around all eighteen holes and although completely exhausted, thoroughly enjoyed the day. The pink faced Georgian facade of the clubhouse could not have looked more welcoming and rather matched our own from the sun. And in the end, the cold beers in the bar were, I would guess, as equally satisfying as those consumed in 1940s Alexandria.