Preparing for Life - and University

Anxiety is the problem we’re seeing most. There are a number of issues with regards to mental health. When I did my A-levels, students could get Cs and Ds and they could still go to a perfectly good university and do a perfectly good degree. That’s not the case anymore.

READ NEXT
GDPR - Is your IT security ready? 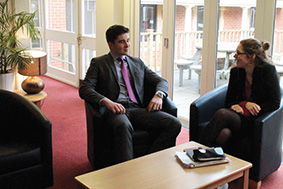 The leap from school to university can be huge, and not just from an academic perspective. The new-found freedoms can be liberating for young people, but not all are prepared for independent living. It can also be difficult for those who are used to a single-sex environment. Caty Jacques, the Pastoral Deputy Head at Hurstpierpoint College explains how Hurst prepares students for their next step.

Caty replies: “When they reach the second year of the Sixth Form all students, whether they are day or boarding, male or female, go into one big house, St. John’s. It is home to 160 students and they all have a room with a bed even if they are day students, though we have separate corridors for the boys and girls rooms.

“The idea is to bridge the gap between school and university - as within a year most of them will be at university, where they will probably be in mixed halls - and to create a greater amount of independence.

“We want to afford more independence as they get older but it is still, in essence, a school. They’re not left to their own devices but there’s less of a feeling that people are breathing down their necks. It’s amazing how much support they offer each other because the second year of A-levels can be quite a stressful year. Most students also take the Extended Project Qualification (EPQ) which has certain pressure points when they’re trying to meet deadlines, so the support they give each other is very important.

“They enjoy the feeling of having some extra space in what is an important year. And life isn’t single-sex, life is co-ed. We are putting them within a far more realistic environment.

“They also get a sensible introduction to alcohol, as many young people go a bit mad when they first go to university. They have bar nights at St. John’s, twice a week, when they are allowed up to two drinks. At the start of the year they can’t wait to have two alcoholic drinks, but by the end of the year they’re often quite happy with a Diet Coke and a packet of crisps. Importantly, they’ve had that first, level-headed introduction to alcohol.

“Students are already used to having co-ed classes and at St John’s they learn to live with each other in a co-ed environment too. If you head into St. John’s, you will see a lovely large social area with some students playing table tennis, some playing pool, a few sitting around talking – all sorts of different groups chatting and socialising together. They make new friends and meet students who they may not have really known that well before."

Caty’s remit is, of course, for the pastoral care of the whole school and for her there is no higher priority than the well-being of children at the school. “If students are not happy, safe and supported they’re not going to do well academically,” she says. “It’s a massive priority for us to make sure that our students have a strong support network.

“Being a teenager is probably more challenging now than it has ever been. With the technology they have access to, students are never out of touch with their peers. It is a very different situation to how it was even five years ago. It creates a huge amount of pressure. Research suggests screen time, whether it’s gaming for boys or social media for girls, is a big cause of all sorts of mental health issues, which is a massive cause for concern.”

It seems there is no escape from the pull of phones and tablets, and all the pressures they place on our youngsters. Should they simply be banned from schools?

“It’s a subject that is very controversial and creates strong opinions,” replies Caty. “We have some parents who would like them banned in their entirety and other parents who say it’s all about educating students to use them responsibly. Students are allowed phones from Year 9 but we do not expect to see them around the school. They can have them in the house but not in corridors, lessons or the dining room.

“We’ve always taken phones away overnight for Years 9 and 10, and now it applies to Year 11 too. They don’t have access to them overnight because that’s when the real issues arise.

“People of my generation look at young people glued to their phones and think, ‘Oh my gosh, you guys are not being sociable. Why are you just sitting there on your phone?’ But it is part of how they communicate. There’s evidence to suggest that a certain amount of screen time is actually beneficial. It’s when it’s too much that it can become a problem. And I think we do have to educate the students in what is acceptable or not.

At the end of the day, we want them to adopt the right habits so that they can move forward successfully and use technology appropriately in the future.

As problematic as phones and social media can be, there are plenty of other challenges facing young people. Has the nature of the problems changed over the last few years?

“At the moment, anxiety is the problem we’re seeing most. There are a number of issues with regards to mental health. When I did my A-levels, students could get Cs and Ds and they could still go to a perfectly good university and do a perfectly good degree. That’s not the case anymore.

“Students often put too much pressure on themselves, they seem to have an internal need to prove their worth. We have many sources of support in place, including counsellors. It is definitely something that I have seen change in the last five years.”

How does Hurst tackle the issues students face?

“I oversee all of the houses and the pastoral care support that we offer to the students during their time in the school. Every student has a housemaster or housemistress, and a tutor, plus we have a very proactive Director of Safeguarding. There are Heads of Year as well as Heads of House, so there are many people to offer support.

“The students are here from 8am until 6pm and they are probably busier here than they would be in many other schools. There’s sport, music, drama and dance, on top of the academic lessons, so they are exceptionally busy. There is a combination of keeping students stimulated as well as offering support.”

In discussing school life with Caty, it is apparent that she has tremendous affection for Hurst and the students. How, I asked, does it compare with other schools Caty has taught at?

“Hurst has this wonderful ability to engage every single student which is not always the case at other schools I’ve been at. There are schools where some students are doers and others who lie low and don’t get as involved. Hurst has the ethos that it doesn’t matter if you’re the best at sport or drama or whatever it is, it’s about taking part and ensuring that everyone is involved.”