The Bull at Ditching

The crayfish popcorn with saffron aioli were moreish and great for grazing on. A touch more power in the aioli would not have gone astray but they were a pleasing entrée.

READ NEXT
Preparing for the end of the tax year 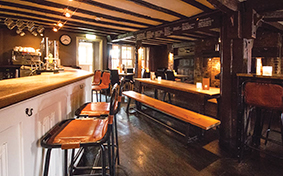 Taking a moment away from the city is a great way to relax and unwind. Sussex is blessed with countless villages all with their own superb inns and pubs. Ditching is one of the best-known and historic locations and just a stone’s throw from Brighton.

Situated on the picturesque high street is The Bull. The pub is one of the oldest buildings in the village, dating back to the early 16th century. It has been under the ownership of Dominic and Vanessa Worrall since 2003. The pair have nurtured and developed the pub in recent years. Having been named ‘Great British Pub of the Year’ in 2016, they have now added rooms and a new dining area to create a real destination venue.

The pub is one that I have visited on several occasions. The large roaring fires and wooden beams are ideal in the colder months. During the summer their large garden with views over the South Downs ensures that this is a year-round venue.

The new dining space had only been open a couple weeks when we visited. This is housed in a new building that adjoins the pub with a brand new bespoke kitchen. The dining area is bright and modern in comparison to the traditional pub. It is very much a signal of intent from the owners as to where they want to take The Bull. An outside terrace is currently being developed which will add even more dining space in the summer.

Upon arrival we were shown to the impressively sized room (we were dining and staying at the pub at the invite of the owners). A large comfortable bed and additional seating area was perfect. An excellent en-suite with large shower completed the room, which had clearly been decorated without scrimping on cost.

Before dinner we enjoyed a Bellini made with local English fizz from Ridgeview - who are just a short drive away. The bar is lively even though it is a mid-week evening.

The supper menu is separated into small and large plates, cookhouse classics and a section of grazing options. I was very pleased to see some local wines represented, choosing a glass of Albourne Bacchus to start. This is a wonderfully crisp wine with a clean minerality that I always enjoy.

I started with the skate rillettes with cucumber, caper crumb and rye toast (£8.50) and my partner had the crayfish popcorn from the nibbles menu (£5.50). We also had some sourdough bread and truffle butter (£4) whilst we waited; the bread was fresh and springy with the deeply flavoured butter giving a real hit of luxury.

My rillettes were plated beautifully. Spots of watercress purée and caperberries provided lots of green colour against the pale fish paté. The flavour of the dish was a little subtler than I had expected. The texture was good, although would have benefitted from being served at room temperature, but was overall an accomplished starter.

The crayfish popcorn with saffron aioli were moreish and great for grazing on. A touch more power in the aioli would not have gone astray but they were a pleasing entrée.

For the mains we went with some big wintery dishes. I chose the confit duck and Toulouse sausage cassoulet (£17) and my partner had the beef and oyster pie with champ, squash and white cabbage (£14). Both dishes were of the sort you would expect from a pub kitchen. Each generous to the point of being daunting in size. Not that this is a bad thing. We ordered hearty and this is exactly what we got.

My duck was exactly what I had pictured. Rich and warming, it was very classic in its composition and true to its French roots. The comforting beef and oyster pie housed in a perfectly short and crumbly crust. The sides of potato, squash and cabbage may not be exciting; but they were perfect for this plate of food. These dishes might not win any awards for their creativity, but they achieve exactly what they set out to be.

We shared a dessert of chocolate and coffee pave with mocha ice cream (£9). Despite both being very full, we managed to finish this thanks to its silky texture and notes of caramel and coffee that cut through the rich chocolate.

The Bull is a popular country pub that is a mainstay of Sussex drinking and dining. It appears on most people’s lists of country pub options, and deserves the respect and recognition it receives. The new dining area and rooms take things to a whole new level. A private dining area, created from the old kitchen, will also appeal to those looking for something more intimate or private. Ideal for both business and pleasure, I can recommend The Bull as both a pub and dining venue. The rooms will also appeal to those wishing to stay close to Brighton but wanting to keep the city at arm’s length.

44 How to create the best business awards

Fiona Graves has joined Platinum Event Management as Event Director, with extensive experience in producing some the region’s leading...