I remember my now ex said to me, “When are you going to stop your stupid racing, you’re an old man now?” That was probably the worst thing she could have said to me because I ended the relationship shortly after that!

READ NEXT
Stand up to stalking 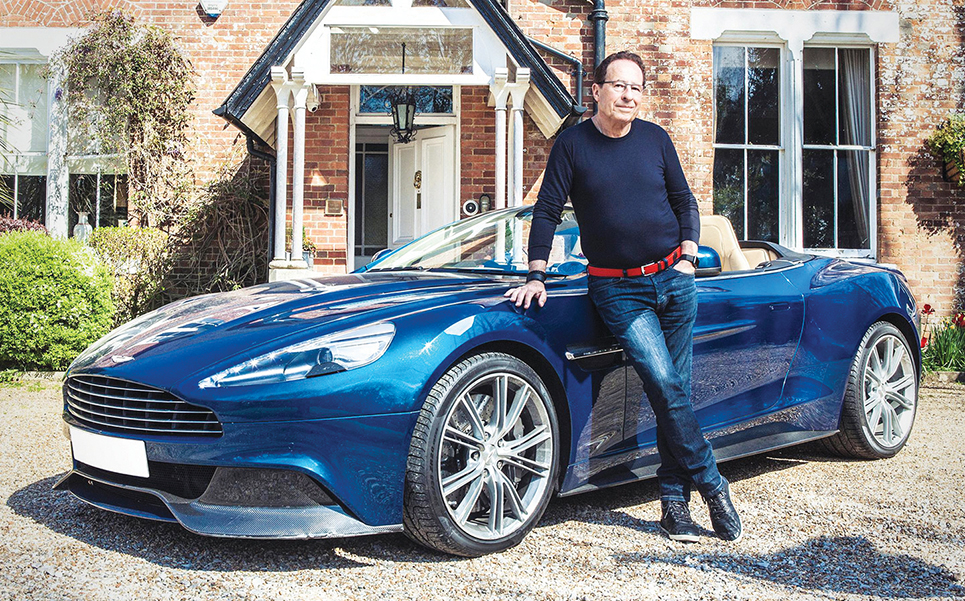 Almost from the moment I was born, I just loved cars. At about two years of age I fell out of my dad’s car and received 25 stitches in my head. When I was four I remember sitting in dad’s car, a Vanguard and he got out to deliver a Christmas present at a farm - I pulled the hand brake off and rolled into a pond! With the water lapping over the bonnet I remember thinking I wonder if my dad will notice! I also remember my first crash was rolling one of the motorised little cars at Peter Pan’s playground on the seafront.

I always wanted to do three things in life; write books, make films and race cars. Right from the age of eight I had a model Mini Cooper S and practiced running it on my desk as if it was Brands Hatch.

What was the first car you bought?

A 1929 Rolls Royce Hearse which I brought with a mate from an undertaker in Dorset and we paid £175 for it. We planned to convert it into a camper van and drive around Europe in it. It frightened my mother because it was parked in the drive way and she thought something bad had happened. So, my parents bribed me to get a sports car and I got an MGA 1500 instead.

I promptly got two speeding tickets in a month! My father was furious and took the car away from me, so I had to get something more sensible and got a 1275 Mini Cooper S (my father didn’t know the difference!). I promptly got banned from driving six months later after having a burn-up with a friend near Guildford. We both got banned from driving for three years for racing on a public highway and dangerous driving. We appealed and got it reduced to eighteen months.

My friend had built a Lotus Elan kit car in his garage and two weeks after getting our licences back, he was killed in an accident! I was 21 at the time and that was massively sobering for me. I lost three friends to car crashes by the time I was 21 and a half. This had a big impact on me and ever since then I’ve always driven carefully on the road.

You have a collection of cars at your home in Sussex but what is your most prized one that you couldn’t do without?

The one I love the most is the one that probably saved my life when I crashed in 2013. It’s a 1965 BMW 1800 TI/SA and that’s the car I race the most. It’s just fantastic and very robust and I race it at Goodwood in the same class as the Lotus Cortinas which are lighter than the BMW and quicker, but the BMW is much better in the wet. I beat all the Cortinas at Castle Coombe last year in the wet when we came fifth overall.

In terms of road cars, I’ve always been an Aston Martin fan and I’ve had several because I love them but they’re never completely reliable. I’ve just recently brought a racing 1964 Mini Cooper S, a bit like the one I had when I was banned.

When did you first get into Motor Racing?

Relatively late. I always wanted to race but I couldn’t afford it. And my parents weren’t keen, but I read an article that Paul Newman took it up when he was 50! I told one or two racing friends and not long after my 50th birthday, a mate who runs a Citroen 2CV racing club rang me and said there’s a car for sale and entry to a 24-hour race. He said if I could sort my race licence, I could have that car! I failed the test at the first attempt after scaring the instructor witless when I spun a Lotus Elise at 110mph on Copse corner at Silverstone. But I redid it and passed the day before the race!

This was my first race and I remember being absolutely terrified while I was sitting in the pit garage at the beginning, praying that it wouldn’t start because I was so scared! The moment I got out on to the circuit, the adrenaline just kicked in and I just had a smile on my face all the way round.

As a writer, I’m never able to switch off from writing even if I go for a run or I’m swimming, playing golf or tennis. I’m always thinking about my next chapter but when I get to a race circuit and I’m racing it’s literally all-consuming with all the practicing and the qualifying, looking at race videos and watching the video from the in-car cameras. So, when I go back home on a Sunday night, my brain is completely refreshed.

It was at Brands Hatch in May 2013. I was co-driving it with Paul Taft who was a former professional racing driver. He put the car on pole and I was trying to defend our position. At the end of the first lap, a Cortina tried to come around my inside and I closed the gap. Just as I turned into Paddock Hill, I was doing about 95 mph, he should have backed off, but he didn’t, and he clipped the rear of my car. I went sideways, my front wheel caught the inside kerb and the car rolled over four times, bouncing on the roof and I ended up on the gravel towards the bottom of the hill.

Weirdly, on the back shelf of the car was my book entitled ‘Dead Man’s Time’ but obviously it wasn’t my time then. I suffered three broken ribs, a bruised spleen and three slipped discs. I also had to have an operation on my right wrist which did affect my writing for a time. Five years on I’ve still got a partly numb foot and have to have physio. It was a life changing experience because it made quite a lot of news and I started getting emails from friends saying they were glad they weren’t reading my obituary.

I remember my now ex said to me, “When are you going to stop your stupid racing, you’re an old man now?” That was probably the worst thing she could have said to me because I ended the relationship shortly after that! The great thing about motor racing is that it’s not ageist, I mean there are guys in their eighties still racing and Paul Taft was 79 when he put the car on pole in that race. If you have a passion it keeps you young!

You’re now a regular at the Goodwood Revival every September, tell me what you’re going to be racing this year?

What does the motor racing at Goodwood mean to you?

There’s something magical about the Revival. There are crowds of 35-40,000 people. For me it’s partly the nostalgia, I remember going to Goodwood with my dad and always dreaming of doing that, so I guess being in the Revival means I’m living my dream. It’s great with all the old cars, fire engines and shops and the clothes that people wear. For me there is no better organised race in the world!

Do you still have a motor racing dream?

A podium finish at the Revival would be my absolute dream. There would be no other race that would make me so happy to get a podium finish!

What’s next for Peter James?

Look out for my new stand-alone novel, coming out on October 4th called ‘Absolute Proof’, which I’ve been working on for 30 years! It’s a thriller about what the consequences would be if it was proven beyond doubt that God existed, it’s Derren Brown/Da Vinci code territory.