It’s not good enough simply being a football supporter to be successful in this industry, you need to be a good businessperson

READ NEXT
Up your game by floating 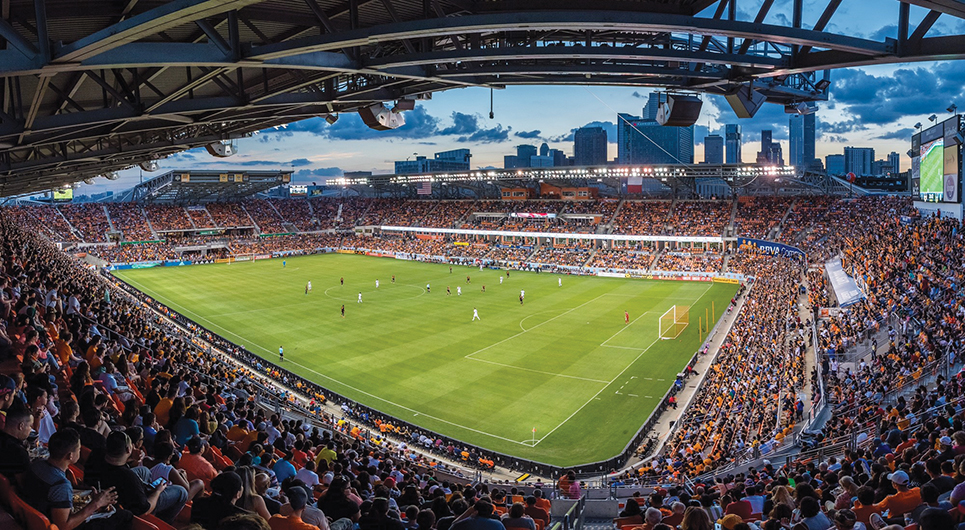 With ‘soccer’ in the States increasing in popularity, we discovered that there is much more to a club in the MLS than just the players and their performances on the pitch. One man who plays a key role in the behind-the-scenes action is CRO and Executive Vice President of the Houston Dynamos, Steven Powell…

The Houston Dynamos play in the Western Conference division of Major League Soccer, tell us more about the Club?

The club moved to Houston from San Jose, CA in January 2006 and originally played in an American Football stadium built in the 1930’s and home to University of Houston football. We built and opened our own stadium in the heart of the city centre in May 2012. We average roughly 19,000 fans per game and maintain an elite group of commercial partners including, Budweiser, Heineken, Audi, Ford, Pepsi, Adidas and Subway.

You were raised in Crowborough, how does a boy from Sussex end up working in Major League Soccer in the States?

My parents are Londoners who moved to New York City in the late 50’s. My sister and I were born there and then returned to the UK as children where we settled in Crowborough. My journey begun as a schoolboy every weekend attending Albion matches at the Goldstone or watching Crowborough Athletic. I wanted to be a professional footballer or become the next John Motson.  Although I did a have a trial with Arsenal as a youngster, I was not to their standard and maintained my dream of becoming a professional broadcaster in the States which I accomplished, and which later led to management roles in the industry before embracing my passion for professional Football which I have worked in for the last 25 years.

You joined Houston in 2006 and are responsible for managing the club’s entire commercial operations including sponsorship, ticket and premium suite sales. How does the club compare to 12 years ago?

Our brand is significantly greater than in 2006 because our audience has grown, and Major League Soccer has evolved beyond recognition. The quality of the football on the pitch has improved dramatically. Our current squad includes eight internationals, including one who represented Panama at this year’s World Cup. As we don’t have the luxury of significant TV rights income, we need to self-generate all commercial income through sponsorship, exec boxes and ticketing. We have set a new club record this season in sponsorship income, which represents seven-figure growth.

Football in the States took off in 1994 when USA hosted the World Cup, how does it compare in popularity with baseball and American football?

Major strides have been made. The younger generation of sports fans are embracing our sport as “their” favourite sport and the multi-cultural growth in the USA has been a great springboard to help this. The younger millennial population of Houston and many other cities has also grown up with a professional soccer league and easy, free access to the Premier League and La Liga. Many of these fans have both a hometown club and overseas club that they support. We have never tried to convert someone who moves to Houston from England to abandon their hometown club, but instead accept us as their new hometown club. This strategy appears to have worked effectively.

How does the MLS compare with the standard of football in the UK over the last 10 years?

Highly debated topic which is probably best answered by managers in both leagues. I would suggest that the better MLS clubs would not be out of place in the Championship.

How has attracting players like Beckham, Lampard, Gerrard and more recently Zlatan Ibrahimovic helped to raise the profile of the MLS?

David Beckham signing for the LA Galaxy did more to kick start the acceptance of MLS by football fans in the USA than any player before or after him. We beat Galaxy this season complete with Zlatan 3-2 in front of a large crowd and there was definitely more interest because he was playing!

Football fans in the UK see well known players going to play in the States towards the end of their careers. Is attracting players like Kaka, Didier Drogba, Andrea Pirlo and David Villa all about money?

I think you will find more of these types of players choosing to end their careers in the US, than China and other regions of the world.  Chinese clubs are probably offering far bigger financial incentives, but frankly the American lifestyle is very attractive for players who are already wealthy and are keen to continue to compete at decent level. David Villa is a good example of that.

You have players like Phillipe Senderos and DaMarcus Beasley in the Dynamos squad. Who’s been the stand out player of the season?

Philippe and DaMarcus are an important part of our squad with their experience and leadership.  Our highest profile impact player is forward Alberth Ellis. He is a Honduran international that we purchased from Monterrey of Mexico’s top division. Lightning quick and a great eye for goal. He is known as La Pantera as he crawls on the ground on all fours like a panther after scoring. A very entertaining player.

How difficult is it to compete financially with the likes of LA Galaxy in signing the big names?

Challenging.  We have a very good head coach In Wilmer Cabrera who played in two world cups for Columbia and who has lots of contacts in Central and South America and a VP Technical Director, Matt Jordan who is a former player and is constantly scouring the earth on scouting missions.  We don’t typically sign older players but look for players we can develop.

You’ve been quoted as saying “My vision is to one day buy and operate a football league team in England, but my ambition doesn’t really go to the point of the Premier League. My ambition is Championship and below, because I think that’s where they’re more part of a community.” Would you like to elaborate on this?

I have an incredible passion for this game and the business of football.  I have learned so much about how to build a football club and manage the business in my 25 years in the industry and the fact that I have done a large portion of this in the most competitive market in the planet (USA), I believe makes me highly qualified to run and/or own a football club in England.  I have a friendship with Paul Barber at the Albion through his time here in North America running Vancouver and was thrilled when he was hired by the Albion, because he shares my passion and enthusiasm for the game and the industry and he is probably one of the games sharpest and most innovative minds.  Matt Turner (The Creative Group / Echo) who is former director of Crawley Town is also a friend of mine and we have enjoyed many great conversations discussing the game and how it can be improved.  It’s not good enough simply being a football supporter to be successful in this industry, you need to be a good businessperson.   The right opportunity/club will eventually present itself to me and when that times comes, I’m there!