My current S-Class is a marvel of superlatives and as l only use it for less than 400 miles a year, it might also be one of the lowest mileage S-Class models in the country but l won’t be selling it anytime soon 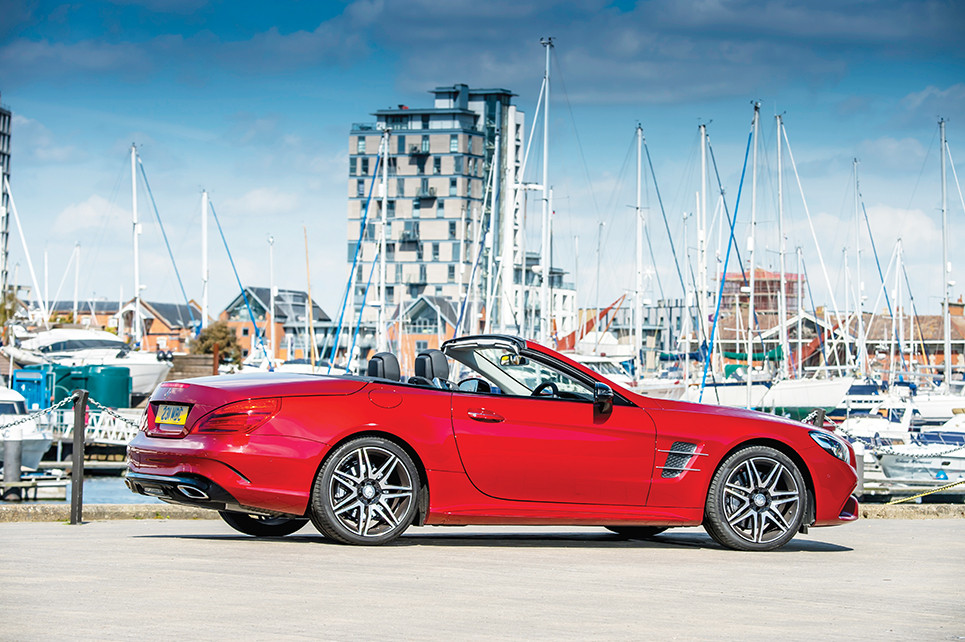 The Mercedes-Benz SL models have been with us for over 60 years and stands as a beacon of style, elegance and panache. As Mercedes boss Dr Zetsche once remarked: “There are around 900 million cars in the world and thousands of models, but there are only a handful of automotive icons. Our SL is one of them”. You’d be hard pressed to disagree with the good Doctor, because there’s no denying the place Mercedes-Benz’s iconic GT holds in the history of, well, iconic GTs.

It’s been many a year since l drove an SL so l was delighted when it arrived on my drive. It had a lot to follow as the McLaren 720s was still awaiting collection when it arrived and having spent a week with that monster, l feared for the review of the SL. But fear not as the new SL400 is as good as ever and as stylish a drive as you will ever find.

You still have the effortless waft that is expected without rubbing it in people’s noses as it retains that slightly low-key impact. The recipe is quite simple; two seats, folding metal hard-top, front engine, rear-wheel drive and oodles of style. The new model is lighter than ever with an aluminium intensive construction resulting in a weight of only 1685kg and more efficient engines therefore it is faster and more efficient than its predecessor.

All SL’s are pretty fast if you hit the Axminster, with the 400 hitting 60 in 4.9 seconds and the monster SL65 AMG reaching it in 4.0 seconds aided by its 621bhp 6-litre V12. The beauty of this car is that it does all this calmly and serenely with not so much as a dribble from the dry martini you might be sipping at the time. Inside, it is all as expected. The best build quality you will ever find, the Airscarf blows warm air onto the back of your next when the roof is down, and supreme leather seats that cosset you in such a way that a journey of 1000 miles would fly past in a jiffy. This new model’s width has grown by 57mm leaving you a surprising distance from your passenger and they have managed to squeeze storage cubby holes in everywhere. My entry level SL400 comes equipped 17” alloys, sports suspension, an aggressive body kit, LED headlights and a sunroof in the fold away roof.

The seamless 9G-Tronic Plus gearbox works away quietly and the suspension makes you feel totally isolated from the outside world. If the standard gearbox mode is not up your street, then the Sport mode will tighten things up considerably and shorten the changes but the Sport plus mode is far too ferocious for this style of car and is best left alone. It also comes with the funky Curve Tilt Function that was originally seen on the S-Class Coupe. The system means that the chassis with active suspension now enables the car to lean inwards by up to 2.5 degrees in bends, in a similar manner to motorbikes.

So often we see classic, timeless car designs totally ruined when they attempt to restyle the model but here we have a car that is every bit as good, if not better, than its predecessors and after six decades, it looks like we enter the 7th decade secure in the knowledge that one of the most stylish cars on sale today is going strong.

I am often asked what l drive as my personal car as if this might give folk some guidance on what car to buy. For the past 15 years l have driven Mercedes as, personally, l feel it is one of the finest cars on the planet. My current S-Class is a marvel of superlatives and as l only use it for less than 400 miles a year, it might also be one of the lowest mileage S-Class models in the country but l won’t be selling it anytime soon – unless l am offered a deal on the SL of course.

I do love a bit of glamour. I recall being taken to the original Ivy back in 2004.  And while I can’t recall what I ate, I recall...