I kept wondering why the cricket ball was getting bigger and bigger. Then it hit me... 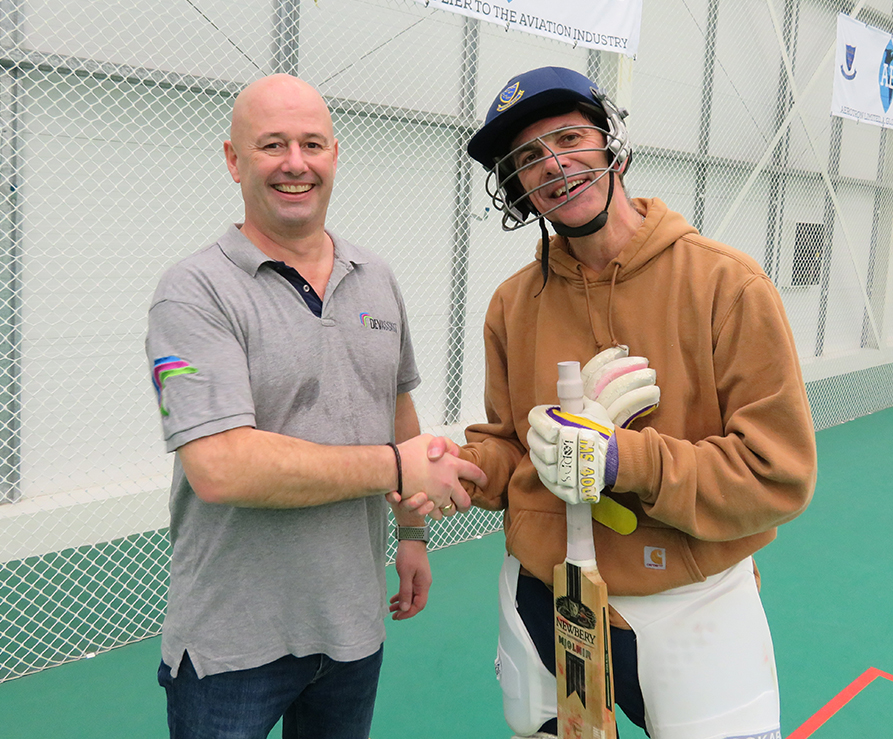 Last month, and following the success of the Platinum ‘Penny Farthing’ Challenge round one, or not, if you look at the fact that I lost and quite frankly made a *** of myself in the process, round two was a complete change, and knowing Paul didn’t like cricket, one I felt gave me an opportunity to level the series at 1-1!

But how can cricket be a challenge I hear you say, particularly as it’s a team game? Well, I happened to know that they have a bowling machine in the Aerotron Indoor School and I thought it was probably available before the season gets underway, so now was as good a time as ever to have a go.

On venturing down to the 1st Central County Ground in Hove, we were greeted by David Wainwright, the Indoor School Administrator who would be helping us through the next few hours. Upon discussion, it was agreed the challenge would be for myself and Paul Addison from Dev Assist to don the necessary padding including the obligatory helmet for the head AND ‘box’ to protect one’s nether regions (I brought my own, but Paul had to borrow his!) and face up to an over (six balls) at 55mph, followed by an over at 70mph. To put that into some sort of perspective to those cricket aficionados, David explained that the former would be like facing Moeen Ali and the latter like facing Jimmy Anderson!

The winner would be the one who was ‘out’ the least number of times.

After we were both able to get in a few overs practice to get bat on ball, first up was Paul. Facing six deliveries from mechanical ‘Moeen Ali’, my confidence began to wane, as Paul not only had his eye in, he successfully attacked the first three balls and had there been a boundary I’ve no doubt he would have thrashed a few 4s and 6s. However, one full-length dead straight delivery clean bowled him, so after keeping his wicket intact for the remainder of the over, his score read ‘minus one’.

Into the second over from mechanical ‘Jimmy Anderson’ and the increase in 15mph seem to make all the difference with Paul struggling to get his bat on anything and being out a further three times.

His total to beat? Minus four.

Yours truly entered the fray and I decided to play it safe. Now at this juncture, I must point out that despite not picking up a cricket bat for 30-odd years, I did used to bat at number nine at school. I was quite used to playing defensively to hang around as long as I could while my batting partner would hopefully score the runs. With this in mind I just thought “don’t do anything stupid and you’ve got this in the bag.” After the first few balls had been dispatched, when it became clear what my intentions were, it was noticeable a few people had started to watch, and my defensive actions were increasingly greeted with boos! Never mind I thought, it’s all about the win. Six balls down and I wasn’t out once!

Onto the 70 mph over and I just had to make sure I wasn’t out more than three times to win. The first couple of deliveries whistled past my outside edge without me even seeing them, so for Paul to draw and take this to a tie break, that meant I had to be out each of the next four balls! First delivery, bowled! Minus one. The second delivery I was given out as caught behind by David after a slight nick. Minus two. The tension was increasing at an alarming rate, as was my heart rate, which wasn’t helped by David adjudging that because the ball struck my pad, much to my disgust, I was given out with the next ball, leg before wicket. Minus three in three balls and it all came down to the last delivery.

This time I connected with a straight bat. Victory was mine – just – by one point, but I’ll take that. Celebrating with my usual good grace, I sank to my knees and with my arms aloft shouting “yes ... yes … yes!” But by this time, most people had gone home, back to work or really couldn’t give a damn. I suspect the latter, but it was only afterwards when it was decided the loser was to face four balls at 80mph that Paul admitted he’d had his eyes closed for quite a few deliveries and with that, he promptly legged it saying he had a very important appointment to attend!

I decided I’d step up (as the winner!) and face this myself. Long story short I missed the first three and the fourth one skittled my stumps in all directions. At 85-90mph this would have been akin to facing Sussex’s Jofra Archer!

I think we both appreciated what cricketers have to go through and hats off to Luke Wright & Co here at Sussex. Quite rightly, I’ve put my cricket career on hold!

Thank you to Sussex County Cricket Club and in particular, a big thank you to David for not aligning the bowling machine so that we had any bouncers aimed at our heads!

So, it’s 1-1 in the Platinum Challenge and all to play for. Lined up for our next set of challenges, its archery, axe throwing, shooting, karting and abseiling down the British Airways i360. We can’t wait!

The Platinum Challenge – helping to raise funds for Rockinghorse. All donations very much appreciated at www.justgiving.com/fundraising/platinumchallenge10