READ NEXT
The importance of the Rose Review 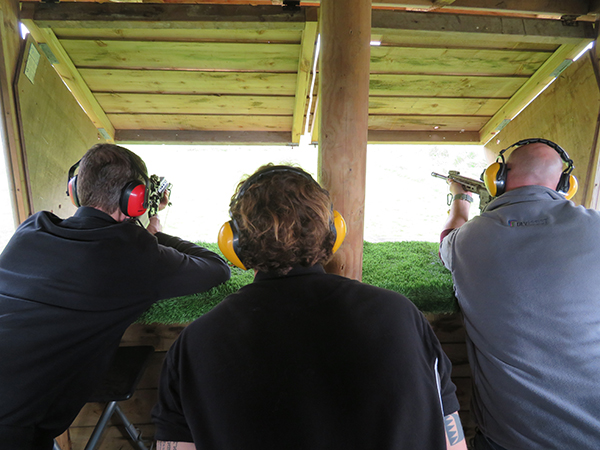 All square after two events, the Platinum Challenge moves to Q Leisure in Albourne for some competitive outdoor fun!

A short hop up the A23 from Brighton is Q Leisure who describe their activities as an adrenaline fuelled experience and who kindly agreed to host the next set of Platinum Challenges. A popular destination for corporate days out, stag & hen parties and team building events, Q Leisure is family run by Peter Peacock and his son Lloyd and is recognised as one of the country’s leading outdoor activity centres, so I knew we were going to have a good day.

We could have chosen any number of activities including clay pigeon shooting, archery, assault rifles, axe throwing, target shooting, fire walking, team building games, archery tag, Segways, bubble football, laser tag or (and breath!) outdoor go-karting. Something for everyone then!

It was an overcast day with a hint of sun trying to break through when
myself and Paul arrived together with James Johnson from Picture Book Films, where we were greeted by our qualified instructor for the day, Jonny. Little did he know what he’d let himself in for because, with old and ugly Ant & Dec in town, we weren’t going to be easy to instruct.

Especially as we’d planned our first activity to be shooting!

Paul and I were presented with two .22 semi-automatic assault rifles which are apparently very rare to the UK; the Ceska Zbrojovka 452 bolt action rifle and the Heckler & Koch 416 which is used as an infantry weapon in many countries GULP! It was pointed out that we had no need to travel to Eastern Europe or Vegas to experience these guns and there are only a handful of activity centres in the UK that are able to offer this event.

After all the necessary security procedures and safety precautions for using such a weapon were explained, Jonny showed us the layout of our outdoor shooting range and that our shooting area would be undercover and, in a cage, presumably to protect the spectators more than anything? Oh, and before anyone starts on at me about shooting not being a sport, it is, just google Katie Gleeson from Goring-by-sea and Double Commonwealth Champion and Olympic bronze medallist Steven Scott from Battle!

First up was a series of practice shots at a selection of spinning metal discs 50 metres away, which if I’m honest, didn’t go too well for either of us. Each weapon had a laser sight but that didn’t seem to help as most of our shots were above, below, left or right, anywhere but straight! Paul blamed his shaking hands (!?) which I’m glad he told me about after we’d finished! My excuse? I’d left my glasses in the car. However, I remember 17 years ago I won a clay pigeon shooting competition and was confident I could win this. After all I only needed to hit one more target than Paul!

Onto the competition then and we both had 20 shots with the winner being the one who hit the most plates. Let me tell you, it’s not as easy as you think, Paul hit a miserly three and I only managed a paltry two! Absolutely gutted and furious with myself, so much so that I got a tad stroppy and walked off, made worse by cameraman James AND Paul’s daughter, Georgia’s ability to both hit five despite no practice first!

I blame the nerves and pressure of competition, but never mind, next up was our opportunity to administer our best Legolas from Lord of the Rings impression with a spot of archery.

Jonny walked us through everything from picking up the bow, to hitting our first bull’s eye. It didn’t bode well when he pointed out I’d begun by holding the bow upside down?! The session started with some practice and tuition, before we finished with the competition proper. While Paul was consistently hitting the red and yellow rings on the target, I was missing the board completely let alone hitting the target. Bragging rights appeared to be heading in Paul’s direction. Let’s just say Paul turned out to be like Robin Hood, while I was more like an extractor hood!

The range was set against a natural sand cliff with some model animals scattered around and after being completely trounced in the competition itself (honestly, I can’t remember the scores!), our final moment was an arrow at one of the ‘stuffed sheep’. Whilst I preceded to tickle the aforementioned beast on its ankle, Paul’s arrow went straight through the side… I’m sure he’s been practicing on the quiet! We were told the experience would make us feel like we were hunting - unfortunately, if we were a couple, on this evidence, Paul would be the hunter whilst I’d be more of the gatherer!?

Thank you to Q Leisure for their kind hospitality and thank you to instructor Jonny for his patience and calm reassurance that I wasn’t half as crap as I thought I was.

3-1 to Paul then, and next up we’ll be back at Q Leisure for some axe throwing and go karting. It’s getting serious now!

The Platinum Challenge – helping to raise funds for Rockinghorse Children’s Charity. If you can help, all donations will be very much appreciated www.justgiving.com/fundraising/platinumchallenge10