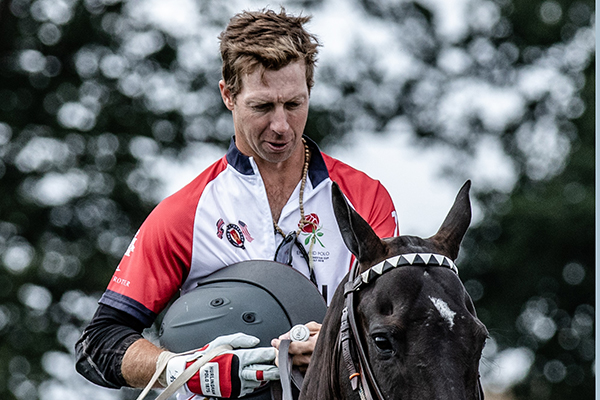 On Saturday July 13th, the afternoon’s 3.00pm match will be the Hungarian Ambassador’s Cup, played for a second year in front of guests of His Excellency Kristof Szalay-Bobrovniczky, who will be presenting the trophy he commissioned in 2018. The four winning teams in the Quarter Finals go forward to the Semi Finals to be played on Wednesday July 17th with the Final taking place on Sunday July 21st.

Liz Higgins: When did you start playing polo?

James Beim: I started at the age of 10 in the North Cotswold Pony Club.

LH: When did your professional career take off?

JB: I started playing adult polo at 15 and professional polo at 17. I got my first opportunity with the Hanbury family and then was lucky enough to play for Ellerston, the famous Australian team owned by business magnate Kerry Packer, in 1998.

LH: What have been the most memorable tournaments you have played in?

JB: The Gold Cup at Cowdray Park and the Camara in Argentina; Argentina being the undisputed home of polo worldwide.

LH: What have been the key successes in your career?

JB: Winning the Queens Cup at Windsor three times and the Gold Cup at Cowdray twice. I have represented England for the past 15 years and been privileged to captain the England team for the last five years.

LH: Who have been the key influencers/supporters during your career?

JB: The Hanbury family in Gloucestershire have been big supporters and also the Packer family. I was lucky enough to have former Aussie professional and Manager of Cirencester Polo Club, Rob Cudmore, help me in the early years and latterly, Jim Gilmore, who was Kerry Packer’s Polo Manager.

LH: Tell us about the years with El Remanso leading to their memorable victory in the King Power Gold Cup 2018?

JB: Charlie Hanbury, Ollie Cudmore, James Harper and I played together as four English mates at the top level in the UK for three years. It was an amazing time. The three years built up to what was to be El Remanso’s last match in UK high goal, having reached the Final of the Gold Cup for a second time. It was an incredibly emotional day, and the culmination of a career of hard work and striving to lift that trophy, and to do it alongside three great friends was something I’ll never forget.

LH: Which team are you playing for in the Gold Cup this year?

JB: This year I am playing for David Paradice’s Scone Polo team. It’s a new formation although James Harper and I remain together.  We are playing alongside Argentine player Nico Pieres and have made a great start to the high goal season by winning the recent Cartier Queen’s Cup at Windsor.  Being based locally to Cowdray, we are hoping for some home support for the Gold Cup.

The King Power Gold Cup quarter finals take place over the weekend of July 13th/14th, with the semi finals on July 17th and the final on Sunday July 21st. For details and tickets please visit www.cowdraypolo.co.uk

Volvo have really been knocking it out of the park recently with some great new models since the Chinese company Geely took ownership...