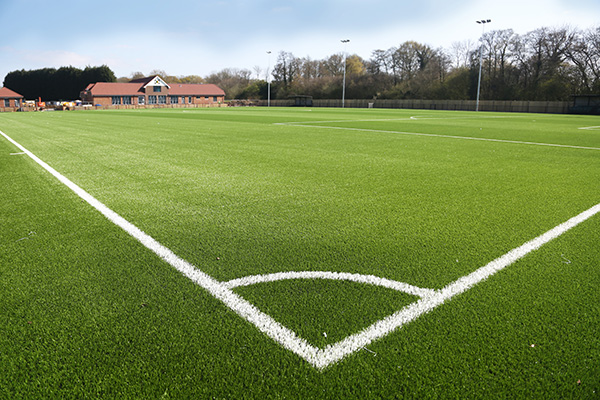 Background
Horsham Football Club start the new season on the most momentous high in their 138-year history after moving into a fantastic new stadium complete with stunning new clubhouse and first class 3G pitches.

The club led a nomadic existence for 11 years without a ground of their own and during this time suffered a series of setbacks, on the field and off it.

The search for a new home
With dated club facilities in desperate need of investment, Horsham Football Club played their last match at Queen Street in 2008 before the ground was sold for redevelopment.

The club invested the proceeds of the sale into The Holbrook Club – a local sports and social venue – with the intention of making it their new home. However, they were dealt a crushing blow when planning permission for the proposed new stadium was refused.

The decision heralded a turbulent period in The Hornets’ history, as they were forced into a series of ground shares at Worthing, Horsham YMCA and Lancing. HFC were hit by two relegations and dropped into the Sussex County League for the first time in 60 years.

The club turned its attention to land adjacent to Horsham Golf & Fitness Club in south Horsham and close to the park and ride facility; this would become fundamental to the travel planning case supporting the new ground. However, in January 2015 the first iteration of plans for the Hop Oast Ground was refused by Horsham District Council.

At this stage and in order to finance the ambitious project, the club entered into an agreement with Reside Developments for much-needed local homes to be built on around a third of land at The Holbrook Club, while retaining and investing in the sports, fitness and social facilities for people to continue to enjoy.

This agreement was dependent on planning permission being granted for the development.

Working on behalf of Reside Developments and hand-in-hand with Horsham Football Club, the award-winning team brought forward modified plans that addressed earlier concerns and set out an inspiring vision for the future of a much-loved community asset, alongside the delivery of 58 new homes.

However, with the project becoming increasingly politicised, considered dialogue was required with local councillors and other key opinion formers to assure them of the advantages of the new scheme.

This comprehensive programme of consultation with stakeholders, including the local community, underpinned by the consultants’ extensive experience in project managing large scale developments and the most forensic understanding and knowledge of the planning system and related legislation, ensured that when the revised application came before the planning committee in March 2017 it was overwhelmingly approved.

The new ground has been named The Camping World Community Stadium following a multi-year partnership agreement with Camping World, and provides:

•  A full-size FA grade 3G pitch and a second training pitch, both floodlit.

•  Superb clubhouse facilities including a directors’ boardroom named in honour of Club President Frank King – who sadly passed away just before the opening of the new facility – a bar area and a function hall also for hire.

• A permanent home for grass roots football in the region.

Katie Lamb, Director of Planning at DMH Stallard, said: “It’s inspiring to now see this incredible club prosper again in a permanent new home that offers so much to the local community. The benefits of the developments reach far and wide in this part of West Sussex, not least the contribution that 58 new homes, including affordable properties, will make to the local demand for housing.”

John Lines, Chairman of Horsham Football Club, said:
“I am very proud to be a small part of bringing the club back home to the town. This is the start of an exciting new era for the club, and to top it all we have stepped up a league after being promoted at the end of last season.”

Steve O’Halloran, Land Director at Reside Developments, said:
“Having worked alongside the excellent people behind the scenes at Horsham Football Club and seen how passionate and committed they are to their club, I have no doubt that 2019 will come to be seen as watershed in the proud history of the club, with their greatest days yet to come.”

Katie Lamb is Director of Planning at DMH Stallard. Contact her at
katie.lamb@dmhstallard.com, or call 03333 231580.