Ursula’s Army is on its way?

READ NEXT
The Gatwick Diamond Business Awards 2020 are on their way... 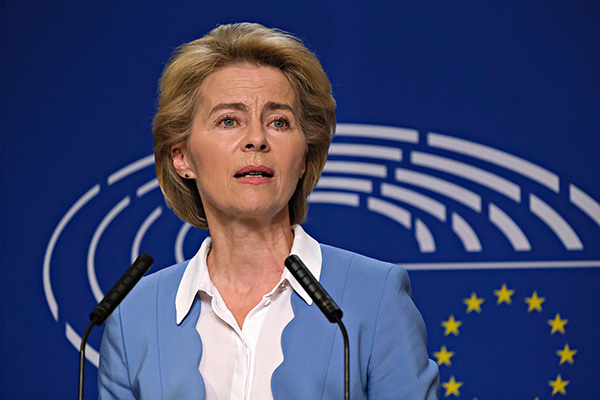 When you start a new job, it’s always nice to have a bit of time to settle into the new role, meet the team and have a calm, orderly handover from your predecessor. Ursula von der Leyen takes over as the President of the European Commission on Friday November 1st, starting the morning after “No ifs. No buts. We are leaving the EU on October 31st.”

What will she walk into? “Good morning Frau von der Leyen. Here’s your office. The bathroom is down the corridor on the left. The kitchen is to the right. We just installed tariffs on UK imports, we have twenty mile lorry jams on both sides of the channel, there’s now a hard border in Ireland and a big demonstration planned, and EU citizens have been stripped of their legal status to stay in the UK. How do you take your tea?”

Who knows what will happen on October 31st, but one is for sure, von der Leyen will be hugely influential in how our future relationship with the 27 remaining EU nations is defined.

So who is Ursula von der Leyen?
The good news is that she loves London. In 1978, she was studying economics at the University of Göttingen, when her father, a leading European civil servant, was warned his family could be a target of  the Baader-Meinhof Group, a German left-wing terrorist gang known for violent kidnappings and assassinations. Ursula was quickly dispatched to the UK with a new name and continued her studies at the London School of Economics. She embraced her temporary home and some years later told the weekly newspaper, Die Zeit, “I lived much more than I studied. I immersed myself for one year in this seething, international, colourful city. For me, coming from the rather monotonous, white Germany, that was fascinating.

“For me, London was the epitome of modernity: freedom, the joy of life, trying everything. This gave me an inner freedom that I have kept until today. And another thing I have kept: the realisation that different cultures can get on together very well.”

Whether her love of London withstands her first trip to Boris Johnson at 10 Downing Street remains to be seen.

If she adores London, she is just as enamoured with the European project and is known as a federalist and talks keenly of a European Army.

In 2011, she spoke abut the desirability of a “United States of Europe along the lines of federal states like Switzerland, Germany or the US.” She has moderated her stance in recent years, clarifying it by saying: “It has become more mature and more realistic. In the European Union we have unity in diversity. That is something different to federalism. I think that is the right path.”

Unsurprisingly Brexit Party leader Nigel Farage threw his toys out of the pram, and accused von der Leyen of wanting to build “a centralised, undemocratic, updated form of communism where nation state parliaments will cease to have any relevance at all.”

Just as controversial has been her call for a European Army. In 2018, she said, “By giving birth to the European Defence Union, we have started to build what I like to call the ‘army of the Europeans’. We maintain national armies, under the authority of sovereign states, but better coordinated and mutually reinforcing.” Again Farage exploded with self-righteous fury, labelling her a fanatic.

But is it fanaticism or pragmatism? Airbus, which employs 14,000 in the UK, writes on its official website: “The EU is facing unprecedented challenges that endanger the safety and security of its citizens: Since 2015, a series of terrorist attacks have taken place in France, Germany, Belgium, Spain and the UK. The strained relationship between the EU and Russia has not yet recovered since the annexation of Crimea. Obviously, member States cannot handle these challenges on their own – and yet the defence landscape in Europe is increasingly fragmented. For example, according to the European Commission, the EU-28 use 20 different fighter planes (six in the US), 29 different frigates (four in the US) and 178 different weapon systems (30 in the US).”

Writing in the Conservative-leaning Spectator, Vernon Bogdanor wrote, “There are four major power blocs in the world — the United States, Russia, China and the EU. Of these, only the EU does not provide for its own defence and security. Remarkably, nearly 75 years after the end of the second world war, Europe is still heavily dependent upon the United States for its defence. But it is hardly surprising that, in the Trump era, pressure has grown for an autonomous European defence policy.”

The EU is already pooling resources - in 2017 The European Defence Fund was launched to coordinate spending on defence research and the acquisition of military equipment. The UK, as represented by Michael Fallon the then defence secretary, declared in September 2017 that we would be open to contributing to the €5.5bn European defence fund after Brexit!

Ursula von der Leyen has extensive experience in defence matters having been Germany’s Defence Minister from 2013 until this July. She has by no means been regarded as an unqualified success. If you want a criticism of Von der Leyen then the Brexit party will never let you down. Brexit Party MEP (and Danish dentist?!) Henrik Overgaard-Nielsen dismissed a potential European Army under Von der Leyen as a joke, adding “We can see what she did to the German army - where none of their submarines can actually sail, where they had tests where she sent all the soldiers but they didn’t have any guns so they had broomsticks instead…”

Noah Gordon from The New Statesman, assessed her tenure more impartially: “The defence job has been viewed as a graveyard for ambitious politicians because of the German public’s wariness of foreign deployment and resistance to military spending.

“…Von der Leyen spent much of her time managing a large government bureaucracy with cultural baggage. Evidence of extremist views in the Bundeswehr (the German armed forces) — a far-right lieutenant posing as a Syrian refugee and plotting terror attacks, Nazi memorabilia found in a barracks — drew a sharp response from von der Leyen, who alleged in 2017 that the military suffered from an “attitude problem” and a “weakness of leadership”. Some in the military hierarchy felt she went too far and resented the remarks.

“Von der Leyen is also under fire for awarding, without proper justification, lucrative defence ministry contracts to outside consultancies with which she had personal connections. A Bundestag committee is still investigating the matter.

“Many military analysts, however, take a positive view of her tenure, pointing out that she increased the defence budget after years of cuts, improved troops’ equipment, and enabled Germany to play a key role in both Nato missions and the establishment of EU initiatives such as the European Defence Fund.

“…Her calls for an “army of Europeans” should be understood as a desire to make member state militaries more interoperable, rather than one to create a military juggernaut commanded from Brussels. In von der Leyen’s vision, national parliaments would still have the final say about deployment.”

The usual suspects among our populist-leaning press like to portray von der Leyen’s proposals of increased military co-operation among European nations as some kind of betrayal of the veterans of the WWII, which is dangerous nonsense. Sharing resources among liberal democracies and friendly nations is sensible and pressing, especially in an age when the support of the US depends on the whim of an unpredictable Donald Trump.

Von der Leyen’s views on defence can understandably dominate headlines, but she has equally strong political leanings when it comes to gender equality. After studying for a medical degree and practicing as a gynaecologist, The Guardian’s Daniel Boffey reports, “She only entered politics at 42. A mother of seven, she has held government positions as labour and family affairs minister, driving forward key policies on gender quotas for company boards and improved maternity and paternity pay and rights.”

Her first battle was to change the policies of her own party, the centre-right Christian Democratic Union. Her biographer Daniel Goffart noted: “She has an incredible amount of energy. You especially saw that in her bitter and protracted battle to modernise her party’s view on the role of the family.”

Under her watch, Germany introduced a law guaranteeing every child over 12 months of age a place at a daycare facility, and a paid parental leave scheme that includes at least two months of paid leave for fathers. She forced Merkel to drop her opposition to boardroom quotas for women, even though the policy was later defeated in the Bundestag. In 2017, she voted for same-sex marriage when her mentor Merkel voted against.

Von der Leyen has pledged to bring in a “green deal” investment programme for the continent in her first 100 days in office and to ramp up environmental targets and write them into law.

The future of the planet is a matter of urgency, but the first item in her inbox will, inevitably be Brexit. She will be likely be a difficult opponent if the UK goes in too heavy-handed. The Economist’s Charlemagne characterises her as “less twinset and pearls than knuckle-dusters and caffeine pills.”

Von der Leyen will be loathe to renovate the current withdrawal agreement,
this she says is “A good agreement, which was negotiated properly in accordance with the red lines drawn by the British government.”

She is also preparing for a no deal, especially with regards to Ireland, which could be hit harder than any other nation. Von der Leyen has said that a European unemployment benefit reinsurance scheme, modelled on measures put in place in Germany to cushion the blow of the world financial downturn a decade ago, could be rolled out across the bloc of 27 nations: “Should an external shock such as a disorderly Brexit hit two or three countries particularly hard, for example, the unemployment reinsurance scheme could come into force.” It is clear that the EU under her stewardship will do all it can to prevent Ireland being dragged down by a British exit.

Yet she is also an Anglophile and like Angela Merkel, she desires a close and productive relationship between the UK and Germany, and indeed the EU. She says: “It would be wrong to see Brexit only as the end of something. The way in which we carry out Brexit will determine our future relationship to our neighbour the United Kingdom. For both sides it is of the highest interest that there is an orderly and good beginning to our future relationships.”

In the crazy world we currently inhabit, predictions are impossible, but it is certainly safe to say that Ursula von der Leyen is about to become a very familiar figure in the UK - for better or worse.

The President of the European Commission

Ursula von der Leyen is the second German to become the President of the European Commission, although Germany was the only EU nation not to back her nomination, a reflection of the tribal divides which can be found in domestic politics.

The tiny nation of Luxembourg has had three Presidents, more than any other nation, the latest being the present incumbent Jean-Claude Juncker.

The position of President has existed since 1967.

It is often, incorrectly, confused with being the President of the EU, a position which does not exist.

The Commission’s job is to develop laws for member states and enforce them.

Based in Brussels, it’s the only EU body that can draft laws. It employs more than 32,000 staff in total and its running costs this year are €3.6bn.