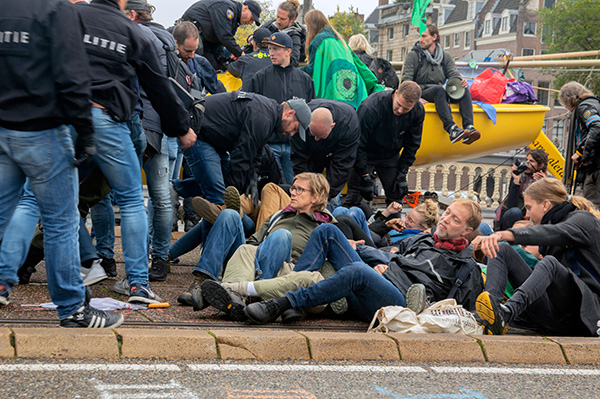 I am sure it will not be long before we are jailed for daring to disagree with zealot groups such as Extinction Rebellion but until then, we should all exercise our right to an opinion, no matter how controversial. Soon we will be sitting in an impoverished, dark country, with a trashed economy, incessant power cuts and a dismal standard of living, caused by their dogma.

So, while l am still allowed to do so, l will say that this is one of the nastiest and stupidest outbreaks of intolerant, irrational zealotry since mankind emerged from the cave. This is not an argument about climate change as that is incontrovertible but, as with the gender assignment debate, any one that dares to argue is immediately assaulted with fury and defamatory cries of ‘denier’. I have spent my life debating and will always be keen to do so with rational opponents  but these self-satisfied smug middle class idiots prefer fury to logic. This is always the sign of someone who is not sure of their own case and hates to hear their inner doubts spoken.

Take the issue they refuse to respond to in their self-righteous anger. The UK recently closed and demolished Didcot A coal-fired power station, an efficient, reasonably modern plant with a generating capacity of 1.44 gigawatts. But why? Why not just mothball the plant until an alternative to coal burning is devised? No such common sense is allowed in the great cause of cutting CO2 emissions.

This will infuriate them as l am about to look at the actual facts. A colossal 259 gigawatts (180 Didcots) of new coal-fired capacity is under construction in China. That’s on top of the 993 gigawatts (690 Didcots) China has already built. The UK’s entire electrical generation capacity, in all forms of power, is 85 gigawatts (59 Didcots). If we shut the UK down, turned off everything and all went back to living in caves, it would make absolutely no difference to the impact of Chinese coal burning on the atmosphere. None. Zip. Zero. Or to be accurate, less than 0.5%. If we turned everything off it would not matter in the slightest - except to our living standards and the total destruction of our economy and our way of life.

China’s planned increase, yes increase, in coal power is three times the size of our entire electrical-generation industry and that includes wind, nuclear and gas. India is also increasing coal generation and last March reached a coal capacity of 200 gigawatts (139 Didcots). Their view is that the West has grown strong and fat on the burning of fossil fuels and now, just as we realise it is damaging to the climate, we tell developing countries that they cannot do it. We dress up like idiots, paint our faces and lay on trains and in the paths of planes and camp in Westminster telling the UK that we must stop.

The zealots only do this safe in the knowledge that they will return to their warm homes, with their cars in the drive, their summer holiday flights confirmed, their kids wrapped up warm in cheap clothes made by third world kids by candlelight, organising protests on their smart phones made by digging lithium out of the ground in developing countries by labourers being paid $1 a day that leaves the region scarred by the detritus left behind and l could go on.

It was even found, and photographed, that the protesters in Westminster last month had a diesel generator hidden in the bushes, shielded by cardboard, so they could power some lights and a charger for their phones thus allowing them to plan further rebellion against all forms of fossil power.

But it is all OK as we are making such tremendous strides in alternative power. What tosh. Wind generation, that scars the West’s landscapes, only functions thanks to huge hidden subsidies, paid for by the poor, and is vulnerable to power cuts unless it is backed up by fossil fuel or nuclear generation.

It can be likened to a thirsty man refusing to drink from a tap during a water shortage, whilst his local water company leaves thousands of leaks unrepaired, allowing millions of gallons to drain away each hour. And these demonstrators, ignorant and engorged with self-righteous rage, demand yet more futility.

65 Why young talent is so fundamental to our success

How Gatwick is inspiring the next generation to develop career skills for the right job by Paula Aldridge, Community Engagement Manager,...