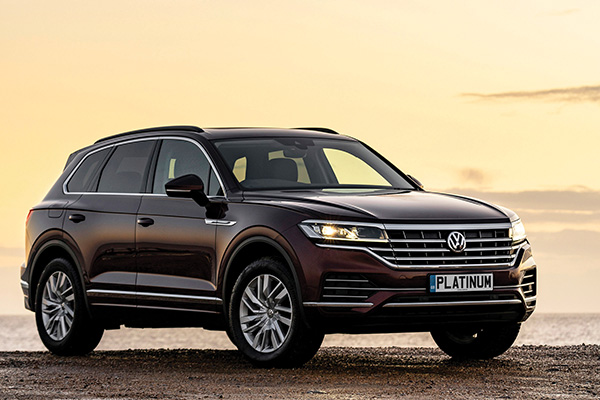 This is VW’s new flagship and the most technologically-
advanced car to come out of Wolfsburg in quite a while. This is the third generation of the model and it should now be seen as a premium SUV for the road.

The MLB frame uses the same architecture as the Audi Q7, Porsche Cayenne, Bentley Bentayga and the Lamborghini Uras, meaning that there is aluminium suspension. The majority of the body is also aluminium along with weight saving all along the production line. It works. Where the previous model was a tad pedestrian, this new model is sharper, more refined and a much better drive. It is bigger but lighter, and as weight has always been the enemy of speed, this is a very good thing. The load space has increased too and it will swallow everything you throw at it.

The interior is a good place to be and has been invaded with all the latest tech wizardry, and the dual screen display looks great and works even better. It includes Night Vision to detect humans and animals in the dark utilising a thermal imaging camera, lane assist that l hate in all cars, four-wheel steering and a head-up display that should be fitted to all cars as it is magical and aids safety with your eyes never leaving the windscreen.

The drive is greatly improved and you will barely notice you’re driving nearly two tonnes of high riding car as the adjustable anti-roll bars, active roll stabilisation and the active all-wheel steering do all the magic for you. The V6 diesels produce either 228bhp or 282bhp, and in the future we will see a 335bhp V6 petrol and a mighty 4.0-litre V8 turbo pumping out 415bhp. It is alleged that we might eventually see a 362bhp plug-in hybrid.

All of this on-road wonder will inevitably compromise its off-road ability as although it has permanent four-wheel drive and a centre diff-lock, there is no rear locking diff so there will be a fair amount of wheel spinning when in a puddle. It offers four modes - snow, sand, gravel, and expert – so it will make a decent fist of it but l would decline the offer of a true off-road experience as you might also need a tow truck. To be fair, it is as good off-road as most of its rivals, though that is simply not where you or l will ever use it.

This is the model’s most impressive makeover to date and it has been totally modernised. Spec it up and this is a tech powerhouse that will impress even its rivals. The VW badge might historically have been seen as a cut-price Audi but no more. The new Touareg stands tall alone and is a very impressive beast.

65 Why young talent is so fundamental to our success

How Gatwick is inspiring the next generation to develop career skills for the right job by Paula Aldridge, Community Engagement Manager,...