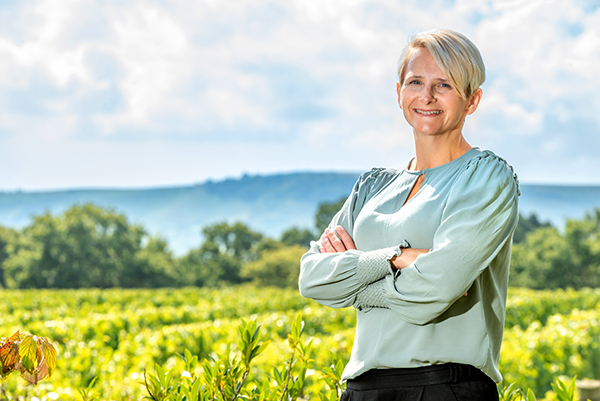 It was only a matter of days following my interview with Ridgeview Wine Estate’s CEO Tamara Roberts, that her 2020 International Presidency with the International Wine & Spirit Competition was announced. Not only is this the first time that an English wine producer has been appointed as President, but it’s the first time that a female has been selected for this highly regarded role – a testament to the rising global status of the English wine industry and most importantly, testament that females are becoming trailblazers in an industry which, for so many years, has been dominated by the opposite sex.

Rewind a few days and I met with Tamara on a cold autumn day at Ridgeview Wine Estate, the vineyard where the award-winning English sparkling wine is produced. Situated at the foot of the South Downs, the estate is secludedly tucked away just outside Ditchling, the quintessential East Sussex village, and  is surrounded by stunning English countryside – flame-tipped trees, snowy dots of grazing sheep and crisp rolling landscapes. On arrival, you can’t help but notice the grandeur of the estate, the smart charcoal-panelled outbuildings clearly hold an abundance of skill and magic. And beyond these, you can’t miss the acres and acres of luscious grape-bearing vines – 20 acres to be precise – as far the eye can see. 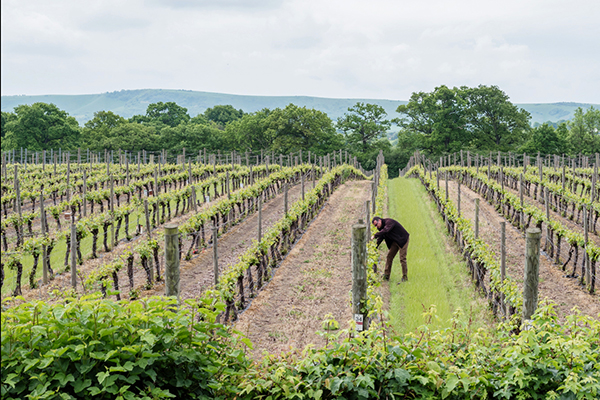 Tamara greets me with enthusiasm. She’s an extremely busy lady; she’s a CEO and now a President, yet she’s calm, collected and oozes a glowing charm. You can instantly sense she is methodical, a vital skill, I’m sure, required when pursuing a career in wine production.

Ridgeview was the brainchild of Tamara’s parents. With entrepreneurialism at their heart having run their own successful computer business in the 1980s, Mike and Chris Roberts had a revelation. Tamara recalls: “At the time there was a small inkling that something was going on in the wine industry. There were glimmers of new things starting here with Nyetimber who were successfully growing Chardonnay, Pinot Noir and Pinot Meunier and I think that my father cottoned onto something special. That, along with his massive love for the Champagne region – it was his favourite wine region, he adored the wine and knew vast amounts about it – it was then that the penny dropped.”

In the early 1990s Mike and Chris purchased Ridegview. Originally a sheep farm, the Roberts planted over 20 acres of planted vines – Tamara notes this is small in comparison – and focussed on their sparkling new venture.

She continues: “The ambition of my father and mother right from the very beginning was that the wine would be of the highest quality and compete at the top level of the sparkling wine category. They were taking on Champagne, not Cava or Prosecco but Champagne.”

Roll on 25 years, and they were absolutely right. With its unique climate and soil, England is pretty much the only other region in the world that has the ability to compete against the likes of Champagne because of its perfect wine-making climate.

“From the research my father did, he had the knowledge of the climate but he also took a calculated risk. You can only be proven right by what you produce in the future.

“We immediately won a gold medal in a domestic wine competition and then the trade starting coming to us very early on with the likes of Direct Wines and Waitrose who were all knowledgable about wine, and intrigued by us.

“One of the biggest door openers for us was in 2005 when our 2002 Vintage won an International Wine and Spirits trophy - then in 2010 we won Top English Sparkling at the Decanter World Wine Awards. We were in a top 10 category amongst world wines and we beat them all, Champagne too, in a blind taste test. There are certain moments in your life that you won’t forget and that was one of them. It moved us from a slightly niche ‘cottage’ industry into a world-class industry.”

In her role at Ridgeview she has overseen the growth of production from 25k bottles per annum to 400,000 bottles, and is responsible for the day to day running of the business. With 30 employees and a capacity to produce one million bottles on site, Tamara’s background in finance has certainly given her an edge when it comes to understanding growth, profitability and production, and of course having a nose for good wine helps.

The success of Ridgeview is most certainly down to free will, determination and a whole lot of passion and love thrown in. Sadly though as a woman in wine, Tamara is in a category so tiny, that she is few and far between. With a strong desire to bring females in the industry further into the spotlight, is it an unusual career for a woman to be in?

“It is fairly rare to see a woman head a wine brand but we certainly aren’t unique – we’ve got Sam Linter, Managing Director and Head Winemaker at Bolney – but unfortunately there are very few women on the commercial side of things and that’s disheartening. However, when I look at the industry as a whole, there are lots of female wine makers coming through. With that comes a lot of media attention and that’s a great thing.”

Tamara continues: “To be fair it is an unusual career as it is quite practical. I still feel in the industry as a whole there is a lack of encouragement and perhaps ambition to take on these roles. Maybe it’s a fear of failure. But it is a lonely place being a CEO, you are on your own making a lot of hard decisions. If you are on your own in the gender profile it is even more lonely as you don’t quite fit in. There are subconscious gender differences going on but you have to manage that and at the same time I don’t want to pretend to be a man!”

Have you suffered from sexism? “It’s happened to me a number of times and from other women too which I find very strange. I often think, ‘why do I have to sit and justify my position?’ There are certain guys who find it very difficult to make eye contact with a woman in a meeting; for example I will be out with my husband at an event and people will direct questions to him rather than me. I can’t quite understand the reasoning behind it, perhaps it’s a slight fear. At one particular business meeting, a guy referred to my husband as the CEO and turned to me and said; ‘and you must do the marketing’?”

Is it changing? “Yes, there is another side to it. I sit on two boards, the Wine and Spirits Trade Association and Wines GB, and I get respect from those. I don’t feel like I’m the token woman there.

“My father was way ahead of his time with his attitude towards women in the workplace. There was no gender specific roles, my mum was very entrepreneurial. I grew up in that environment and then naturally you take it on yourself. We have to encourage mutual respect. We are all human beings after all. Some of us have better skills than others regardless of whether we are male or female.”

Tamara continues: “But in the last five to ten years I have seen much more of a collaborative approach in and around business. We talk about successes more and encourage flexibility for both male and female employees. But sadly there is definitely a fear of failure out there; I’m not sure what would change it… perhaps politics?”

Tamara’s journey is inspiring, extraordinary and encouraging. Championing women in business, she certainly deserves all of her successes. Looking back in history, in 1805 Barbe-Nicole Clicquot was the first woman to run a Champagne house, taking the helm at a time when women in France couldn’t hold a bank account, let alone run a Champagne house. However, Barbe-Nicole grew the business into an international empire, driven by passion and determination and ‘President’ Tamara, an effervescent female CEO, is too making her mark on the international sparkling wine scene. We raise our glass to you!