The battle for your remote 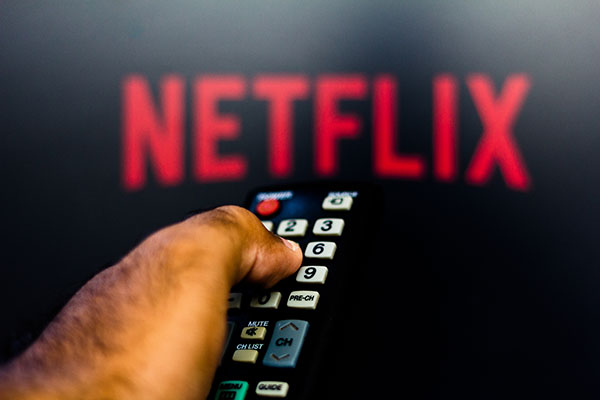 Netflix is now so ingrained in popular culture, it is impossible to believe it only launched in the UK eight years ago. It has produced some spectacular TV including House of Cards, The Crown, Breaking Bad, and Stranger Things, with production standards you’d expect from a big-screen Hollywood blockbuster. Programming budgets dwarf those of traditional terrestrial broadcasters like the BBC, C4 and ITV, and it is big business. In June 2018, its market capitalisation reached a value of over US$180 billion.

The trouble for Netflix is it has been too successful, and some very big players are now looking to grab a big piece of the pie.

The UK TV market may be paltry compared to America, but it is relatively untapped and enticingly attractive compared to the saturated and fragmented American industry. Either launched or about to launch are subscriptions services from Amazon, Apple, BBC/ITV, Disney and Sky (through its NOW TV brand). American giants looking on with interest include HBO Max and NBCUniversal. If millions of British viewers will splash out a minimum of £5.99 each month for Netflix, then why wouldn’t they pay similar for Disney or Apple?

Cord-cutters and cord-nevers
We are used to ‘free’ TV (funded by a compulsory licence or advertising), whereas American viewers have never had the luxury of decent free-to-air TV. Viewers accepted that paying for expensive cable TV was the only way for access to anything watchable. With many cable packages now exceeding $100, it hasn’t been difficult for internet streaming companies to undercut prices.

The cable companies have been struggling to stem the growing tide of ‘cord-cutters’, the customers who have switched to the likes of Netflix or YouTube. In the first three months of 2019 cable and satellite suppliers lost 1.4 million subscribers [source: Wikipedia].

They are even more fearful of ‘cord-nevers’, the younger demographic who have never seen the need to pay for cable TV in the first place. Way back in 2012, Time Warner CEO Jeff Bewkes warned that cord-nevers did not see anything worth paying for. This is the lost generation who will never pay for traditional TV suppliers, thanks to the rise of YouTube and Netflix.

Busting Blockbusters
On both sides of the Atlantic, there was once another lucrative small screen market – video rentals. At its peak, the US video rental company Blockbuster totally dominated the sector with over 800 outlets in the UK alone. 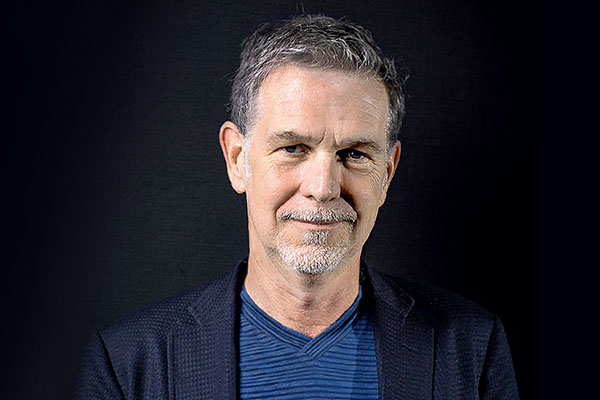 Blockbuster served a purpose but was frustrating. California tech entrepreneur Reed Hastings, was one unhappy customer: “I had a big late fee for Apollo 13. It was six weeks late and I owed the video store $40. I had misplaced the cassette and I didn’t want to tell my wife about it. Later, on my way to the gym, I realised they (the gym) had a much better business model. You could pay $30 or $40 a month and work out as little or as much as you wanted.”

Reed was already a successful businessman and tech wizard. After graduating from college, he spent two years teaching maths in Swaziland as part of the Peace Corps, before returning to complete a masters degree in Computer Science, specialising in AI. In 1991, Hastings founded Pure Software, which developed a debugging tool for engineers. A few years later, the business, now renamed Pure Atria after a merger, was acquired by Rational Software and Hastings walked away with approximately $750 million.

Despite having the capital and an innovative idea, Netflix’s early days were rocky, and the dot-com bust in 2000 hit the business hard. The desperate solution was to approach the very company Netflix had disrupted – Blockbuster.

In a meeting in September 2000, Hastings and Randolph offered to sell 49% of Netflix to Blockbuster for $50m and to create Blockbuster’s online division. In his book, “That Will Never Work”, Randolph describes Blockbuster CEO John Antioco’s reaction: “It was tiny, involuntary, and vanished almost immediately. But as soon as I saw it, I knew what was happening: John Antioco was struggling not to laugh.”

Netflix had the last laugh though – within ten years, Blockbuster was bankrupt.

Much of Netflix’s success can be attributed to Hastings’ ruthlessness, as his former business partner testifies. Randolph was an entrepreneur who, early on, saw the potential of selling goods via the internet. When his start-up was acquired by Pure Atria, Randolph and Hastings became close, and later brainstormed ideas for a new business. Randolph disputes the popular narrative that Netflix was born out Hastings’ anger at a $40 late fee but concedes “it’s a good story”.

Randolph felt the full force of Hastings’ brutal bluntness in 1998 as Nicole Sperling from The New York Times describes: “After a botched investor pitch with Sony that went horribly wrong, he got a big dose of Netflix’s radical honesty. Mr Hastings asked to see Mr Randolph alone and subjected him to a PowerPoint presentation detailing the reasons he was no longer fit to remain chief executive.

“By the end of the talk, Mr Randolph was bumped down to president, and Mr Hastings was the new chief executive. Mr Hastings persuaded Mr Randolph to give up some 650,000 stock shares, which reduced his Netflix stake to 15%.”

Randolph seems to bear no grudges: “I have this tremendous respect and affection for him, as opposed to bitterness. Most people wouldn’t have had the strength to say that. But he recognised it was the right thing for the company.

“…Unlike me, Reed is not only a phenomenal early-stage CEO — he’s as good (or better) as a late-stage CEO”. Randolph left the business in 2003.

Hastings’ single-minded determination was certainly required when he made the controversial, but all-important, decision to split the DVD mailing business from the internet streaming service in 2011. Outraged customers who wished to get both the stream and the DVD faced hefty price hikes, but Hastings was spot on. He placed all his emphasis on streamed video, when the public was still hooked on DVDs, and his gamble paid off handsomely.

The next throw of the dice was in 2013 when Netflix started creating its own content such as House of Cards and Orange Is The New Black, much of which received critical and popular acclaim. By the end of that year, Netflix’s stock had tripled in value.

The Disruptor Disrupted
Netflix is about to lose two of its most prized possessions in the US. Its most-streamed shows, Friends and The US Office, both are being reclaimed by Warner Media’s HBO Max and NBCUniversal’s service respectively. Netflix will suffer on both sides of the Atlantic as a result of Disney’s platform, which will block off Disney and Pixar films, and the Marvel franchise.

Karl Bode writes on vice.com that, “Every major broadcasting company will likely have its own streaming service by 2022, and most of them are likely to engage in the same behaviour.

“Superficially, it makes perfect sense for a streaming company to want to hide its own content behind an exclusive paywall, driving new subscribers to its own service.”

But what if everyone does that? With so many streaming services, all competing for the viewers’ hard-earned cash, who will survive? Who has the content people want to watch?

Netflix has been preparing for this for years. It knows the only content it can guarantee keeping is its own.

On forbes.com, Dana Feldman asserted: “Netflix has been preparing for the influx of competition. The streamer realised that eventually media conglomerates would pull their top titles. This is why, in 2018, Netflix spent $12 billion building its library of original films and series, an 88% uptick from 2017. And, spend on original content this year (2019) is expected to reach $15 billion.

An analyst at eMarketer, Ross Benes touches on another reason why Netflix is well positioned. “They make it so easy for people to stream. They’ve been pioneers in video compression, making video available on every platform easily, making content downloadable and viewable offline, a lack of buffering, serving personalised messages for recommendations and knowing when to skip credits, as well as begin the next episode immediately.

“… It’s not guaranteed that upcoming video services are going to have that ease of use immediately.”

Battleground United Kingdom
There is no doubt that the major players are taking the UK market seriously. Variety’s Henry Chu reported in September that: “In July, the company announced that it was establishing a production hub at Shepperton Studios, outside London. Disney, too, has vacuumed up valuable production space, signing a long-term lease at the historic Pinewood Studios.”

With the BBC licensing model under unprecedented pressure, the UK market may become even more ripe for profit over the next few years.

I think Netflix is on a secure footing for the short term at least. It simply has better original programmes than Amazon or Apple. BritBox, the BBC/ITV offering, doesn’t seem to offer much more than Dave or Gold.

The most recent top ten ratings chart for UK paid video on-demand programmes included only one re-run (The Big Bang Theory) – everything else was new content. For now, Netflix appears to be in charge. It ended 2019 with over 148 million paying members worldwide.

The end of the golden age
While Netflix may win, the ultimate losers will be the viewers facing the prospect of paying for multiple services or missing out on favourite programmes.

The Guardian’s Stuart Heritage offers a gloomy prediction: “Netflix didn’t become a monster because people wanted to watch a specific show; it became a monster because people wanted to watch everything. When its streaming platform launched, people were spending more than £15 just to watch a single season of a show on DVD. So to be able to watch every season of a show – and every season of hundreds of others of shows – for a fiver a month was revolutionary.

“That will be a memory soon. The content creators got greedy and scared, and now they’re determined to drag things back to the bad old ways. They will force everyone to pay for everything separately… Make no mistake: we’re the ones likely to get stiffed here. The golden age of streaming is dead.”