READ NEXT
Back on Course 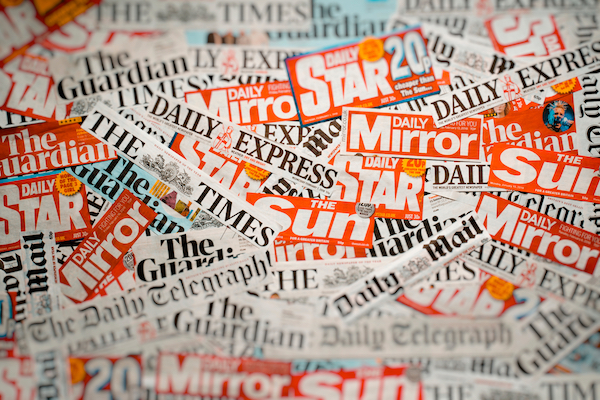 I don't know about you, but l am sick to the back teeth with all the sniping at the government when it comes to their response to the coronavirus.

I am not referring to party politics but rather this, once in a lifetime (we hope), global pandemic for which no one has a template or a guide from which to work from. All global leaders are making it up on the fly but when it comes to the UK, they are making a fair fist of it.

The popular press have a lot to answer for on this subject. Good newspapers lead with sound editorial and expect their readers to follow. The rubbish ones, that are good only for lining the budgie cage or wrapping your chips in, follow the lead from their readers, leaving them in a race to the bottom. The fury that radiates from their pages every time a decision is made does not highlight the faults of government, rather it highlights their total inability to give a damn as they chase readership.

You’ve seen it shrieking from their pages:

Day 1. WE HAVE TO LOCKDOWN AS FAST AS POSSIBLE

Day 2. WE CANNOT TAKE THIS LOCKDOWN ANY MORE AND SOMETHING HAS TO BE DONE

Day 3. IT IS TOO EARLY TO UNLOCK AS WE WILL ALL DIE

Day 4. THE GOVERNMENT HAS TO HELP BUSINESS

Day 5. THE CHANCELLOR ANNOUNCES A RESCUE PACKAGE BUT IT DOESN’T GO FAR ENOUGH

Day 6. £330 BILLION BUT THERE IS A CHAP IN BRADFORD CALLED JOHN WHO CAN’T ACCESS THE SCHEME

Day 7. THERE IS NOT ENOUGH PPE Day 8. DOCTORS TO SUE OVER THE LACK OF PPE

Day 9. EVERY PERSON IN THE COUNTRY SHOULD BE GIVEN PPE

And so it goes on. I am well aware that the media’s role is to hold ministers feet to the fire over an array of matters, but there comes a time when we should realise that the government has an horrific ‘once in a lifetime’ job to do. They should be allowed to get on with it, without all the sniping from the sidelines by uneducated and unprincipled journalists who couldn’t run a bloody whelk stall.

Of course, they are going to make mistakes and, sadly, on this subject that could lead to some death, but name me a single soul in politics who would be doing a better job?

Corbyn? Now there is a man who couldn’t run a whelk stall.
Starmer? By the time he had finished consultation with every union leader and special interest group from Noddytown to Loonytown, we would all be dead.
The Greens? Yes, that one policy party who don’t even really understand what that one policy is.
Sturgeon? This women who hates the Brits so much and is so power hungry, that she would sell her soul down the river for a shot at ruling - anyone, anywhere.
Farage? I cannot think of anything to say here except: ‘Don’t be ridiculous.

This is the government we voted for in huge numbers, so why not shut up and let them get on with it the best they can. Never have we witnessed a Chancellor who so understands the woes of business that he has launched quite a few revolutionary schemes that are underpinning business. The job retention scheme is literally hold- ing companies together whilst we get though this nightmare. The CBI loan scheme looked good until the banks got involved and slowed it to a crawl (reasonable l would say as they were on the hook for 20% of it and they are a business like the rest of us).

The Bounceback Loan Scheme worked like clockwork for most and put billions into our business accounts within 48 hours in most cases, interest free for the first year and then at 2.5%.

The pandemic is not the fault of any government (let’s leave the Chinese out of this for now) - it came out of the blue and they all had to play catchup, without a roadmap. Then there is the thorny issue of personal protection equipment for the NHS and other care workers. Of course, they should have it but where exactly do you source billions of pieces of such equipment within five days when every other country in the world is trying to do the same - and the country they all come from was the epicentre of the virus? If you don’t know the answer, how the hell can you expect the government to have the answer? Within eight days, they had sourced over 17 billion pieces of kit. Of course, it’s not enough but for heaven's sake, stop the sniping and help with the answer.

The other issue is the lockdown. First the papers were screaming that we should lockdown immediately even before the science was there to back it up. Understanding that the economic shock could be more deadly than the virus, government tried to take a gentle approach to the subject, and watch the science and the countries we were a few weeks behind. Then they decided the lockdown was the only option. Within hours, we see the headlines screaming that we should refuse to live in a dictatorship and how the hell does government have the right to tell us what to do and the economy will be wrecked. Then they consider lifting a few areas of the lockdown to be greet- ed with headlines saying that it’s too early and that we will all die.

As l have said many times before, who the hell would want to be a politician just to have your private life taken apart piece by piece by the press, with every slight transgression from 30 years ago being blasted across the nation's breakfast tables. And for what? The pleasure of working 12 hours a day, having people scream at you during your local surgeries, eggs thrown in the street and £81,000 a year. If you want the best in parliament, this ain’t the way to do it. They run for the hills, earn a fortune in private enterprise and leave politics, in some cases, to the ‘best of the rest’.

If this nation is to try to come together, we need to stop the sniping by idiots and uneducated twits who couldn’t get a job saying ‘do you want fries with that’, and back the government.

For the vast majority, the answer is no therefore why not actually support them and give them a better chance to get on and fix it? The time wasted do- ing press interviews which take hours to prepare for, could be better spent doing their jobs.

Take that colossal twat, Piers Morgan. Day after day insulting ministers for not going on his show to explain themselves - he called Matt Hancock ‘spineless and shameful’ as he did a BBC interview but not with Morgan.

Possibly, just possibly they are a tad too busy to go on his show to be insulted, interrupted, belittled and made a laughing stock, just to fuel Morgan's ego and up his ratings. His sense of entitlement is staggering.

Newspapers are in a fight for their lives as ad revenue drops away. The digital age has given them a swipe as so many get their news online and they run stories that infuriate and deeply depress their readers. Why the bloody hell would any of us be reading newspapers?

I, for one, avidly read newspapers - three a day if you must know, as l like to be informed on world events from various perspectives and adore pithy editorial but they are even pushing my tolerance to new levels.

I guess we all accept that local papers are dead in the water. As they run headlines like 'Cat Up Tree' or 'Mrs Jenkins Makes Tea For The Brownies', they thoroughly deserve to expire. But national broadsheets are desperately needed - not just for general information but to hold ministers to account during normal times. Without them, there are some politicians who are no better than petty criminals and will steal, lie and cheat if they think they can get away with it.

News from the internet - l think not, as it can be so biased and full of lies that it could kill society in the long term. Amazing that there are algorithms now that will feed you only what it looks like you are interested in. Therefore if you look at racist pages, it will decide that is your appetite and it only feeds you racist stories!

Television - sure but they chase ratings and news simply is not a rating puller during normal times. So, we are left with newspapers and magazines. The upside here is that we are all responsible for what we print and that forces editors to focus on the truth and sensible argument - or be hauled into court.

Newspapers barons or moguls have been the main problem as they set their own agenda and then employ editors who either agree with the bosses views, or are so bereft of all principles that they toe the line and spew forth any venom the owner wishes to dish out, to anyone who ever slighted them. Trust me, we can all write an article that is full of lies and slander, written in such a way that no court in the land could get us for it but the negative message gets out far and wide. And of course, any ordered retraction to a three page story will be two lines on page 54.

We need a free press but at any cost?

“Many call it a beefed up Polo but that’s unfair - it's much more than that.”...