READ NEXT
Ramping up Operations 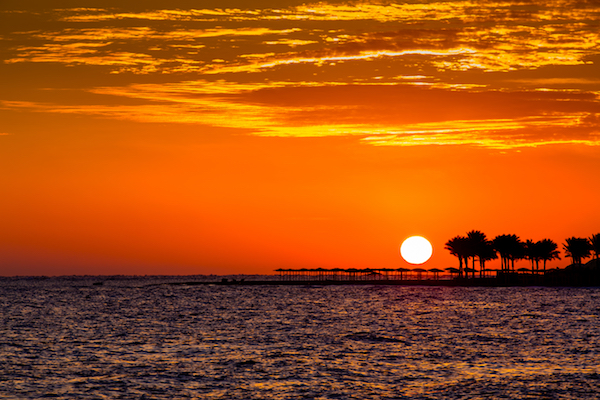 I arrived in Sharm el Sheikh in 1992, when Sharm was fairly undeveloped as a dive destination as the Egyptians hadn’t yet caught onto the enormous tourist income that can be generated from diving. The Israelis, who held the Sinai desert until 1982 after the 6-day war, were not so slow and had started development before they were forced to give it back. Once Egypt had the area back, they were a tad confused by the small buildings with water tanks and compressors and it took a German friend of mine, Ralph Schmidt to arrive and explain what was going on. Ralph convinced them to let him have a crack at opening dive tourism and launched Sinai Divers the next year and, as they say, the rest is history.

Sharm rapidly became one of the premier dive sites in the world and upon my arrival in 1992, there were less than 700 tourist beds available - when l left five years later there were over 43,000.

Sharm is an incredible location, situated at the very tip of the Sinai Peninsular with the Red Sea lapping its shores. The Red Sea is famous amongst divers for its remarkable array of marine life and, after the Sea of Cortez (featured last month) is the second finest diving sea on the planet. Permanent sunshine, crystal clear water, over 200 different types of hard and soft corals, walls, dramatic drop off’s and hundreds of species of fish all go to make this a superb dive and holiday destination.

The region first came to fame when Jacques Cousteau used it as the location for Conshelf ll in 1962, an exciting project to see if it were possible for humans to actually live underwater. He developed a revolutionary underwater habitat in which five divers lived for a month and proved the point. Amazingly, remnants of the site are still there and, ironically, it has become a dive site.

From the airport, it is a short drive through one of the most beautiful deserts in the world to Naama Bay, the centre of the town and my home for many years. From here, divers have easy access to hundreds of stunning dive sites, from beginner to expert and everything in between. To the north, you have the Straits of Tiran where you find three islands named after famous 19th century British cartographers - Jackson, Gordon, Thomas and Woodhouse.

Reserved really for advanced divers, here you find Hammerhead Sharks, huge rays, turtles, stunning schools of fish, massive hump head Parrot fish and the elusive Tiger Shark. I could bore you for hours about the dives done here but suffice to say, it is stunning. No one is allowed onto the islands themselves as they were recently sold to Saudi Arabia and in my day, they tended to shoot at you if you stepped foot on the islands and that always tends to mess up your day! 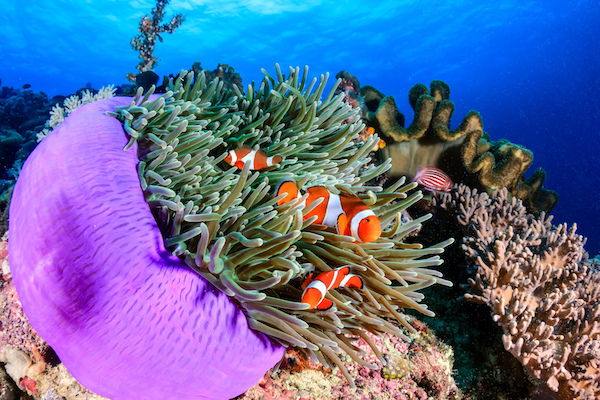 Along the coast during the hour boat trip, you pass countless dive sites all framed by the backdrop of the rolling sands of the Sinai Desert and, be there at sunset, and you will see one of the most magical views of your entire life.

There are too many dives sites to mention but l will feature two of the best in the world - the drop off at Shark Reef and wreck diving on the SS Thistlegorm.

Shark Reef is literally the very tip of the Sinai and sits within the Ras Mohamed Nature Reserve, a desert location awash with wildlife but it is underwater that the action really gets going. The dive is a 1,000 metre wall that plunges into the depths and with the entire Red Sea laid out before you, there are mass upwellings of currents that drive nutrients up from the sea floor and, in turn, attract some of the largest schools of fish l have ever seen. The wall itself is also teeming with fish with every nook and cranny packed with life but it is the blue that really turns me on.

Put the wall behind you and swim out into the blue with 1,000 metres of sea water beneath you and wow - the largest school of Snapper l have ever seen, surely numbering into the thousands, and in l go. To get lost in a school of large fish like this is truly memorable until they suddenly part and you realise they are running away from something - something big. And indeed, when this happened to me it was indeed a 5m Oceanic White Tip shark shot in, in an attempt to grab a Snapper and very nearly got me. I am not sure who was most surprised - l would vote for me and once l changed my wetsuit, we carried on!

You just don’t know where to look as there is so much going on in every direction, To my left, two Leatherback turtles, straight ahead a massive school of Blue Tang, behind me the wall with giant Moray Eels poking out and to the right, a 15 mt Whale Shark cruises in to see what all the fuss is about. Then a pod of the resident Risso Dolphins sweep in with a few black tips sharks off in the distance - and it is still only 11am!!!! I implore you to dive Shark Reef before you die.

The second of my favourite dives is the wreck of the SS Thistlegorm, an armed British merchant ship that was sunk in 1941 by 2.5 tonnes of high explosives dropped by two German Heinkel He 111 aircraft. The ship was packed to the gunnels with military equipment destined for the British Army’s Western Desert Force - it never arrived.

Discovered by Cousteau in 1956, it was untouched since its demise and packed with BSA Motorcycles, crates of Bren guns, thousands of cases of ammo and shells, army trucks, Lee Enfield rifles, aircraft parts and two LMS Stanier Class steam locomotives.

Sitting at only 30m, it is one of the finest wreck dives in the world. Removal of anything is strictly prohibited and this was a lesson l learnt the hard way. On one dive with fellow Instructors, whilst sea trialling a new live-aboard dive boat we commissioned built in the Suez, we decided that a few of these items would look great mounted outside our dive club, so we set about bringing up two motorcycles and a crate of rifles, which resulted in two nights in jail for gun running. Seriously, they arrested us for gun running as we had brought up the rifles - rifles l might add that were coral encrusted and would never fire again but it was the only charge they could think of. All charges were dropped when a few friends turned up with ten cartons of Marlboro cigarettes. 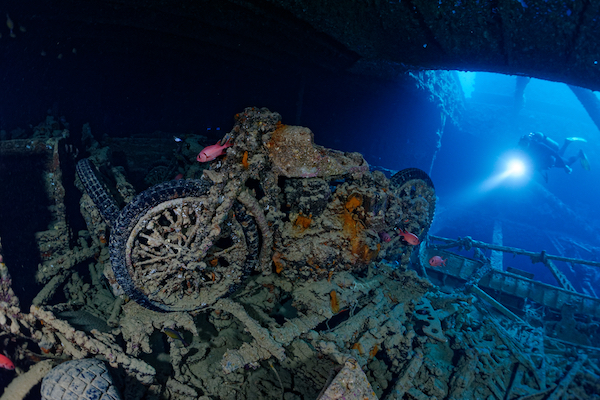 Dropping down from the boat brings the wreck slowly into view and with anti-aircraft guns still positioned for firing and the holds open, revealing row upon row of weapons and motorbikes, it is a sight you will never forget. Then it is an hour in and out of holds, sitting in the driving seat of army trucks and exploring the weird find of two steam locomotives blown clear and laying next to the hull. All the while, you are studied by schools of Tuna, Barracuda and Snapper with Moray Eels, Lionfish, and Scorpion fish weaving around the wreck - no wonder The Times noted this as one of the top three wreck dives in the world. Care should be taken though as there are still thousands of rounds of live ammo and shells littering the site. I must have done over 100 dives on this site and there is always something new to see.

In addition to the shore based dive sites, there is of course the rest of the Red Sea to explore and this is best done by liveaboard dive boat. One of the best is to the Brother Islands, around 200km south of Sharm and noted for the lighthouse on Little Brother, built by the British in 1883. The islands are really only for experienced divers due to their isolated position, strong currents and large pelagics.

Sadly the islands are currently closed to divers due to a few attacks by Oceanic White Tips, which are very large and aggressive sharks but not normally any trouble for divers unless, as in this case, a few blithering idiots think it’s a good idea to try and shark feed, therefore teaching the sharks to come in close and get a free snack - of course, they don’t know where the snack ends and the diver's arm starts...

Stunning diving and voted by CNN as one of the top ten dive destinations in the world and forget the sharks - you have more chance of being hit by lightening - twice. In a red hat. On a Tuesday

There is so much more aside from diving, such as the desert. I spent several weeks in the desert with a nomadic Bedouin tribe who were
the family of a good friend and l can honestly say that is was one of the most remarkable and eye-opening periods of my life. 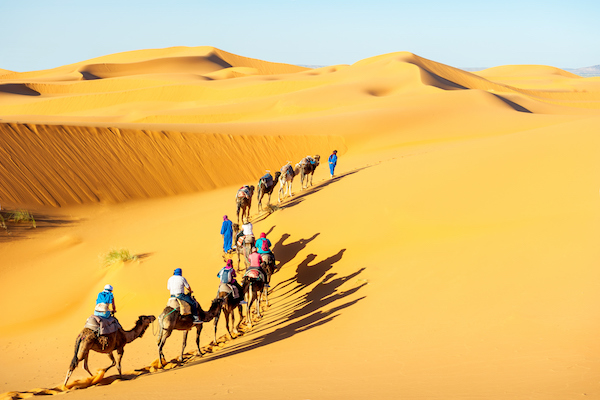 Then there are wadis, oasis and St Catherine's Monastery. In the middle of absolutely nowhere, and dating back to AD330, this is the oldest continuously inhabited Christian Monastery in the world and is the site where God appeared to Moses in the Burning Bush. Never destroyed during its long history, it is original, unique and a site of holy pilgrimage for many.

I have a long love affair with the Sinai, with the Red Sea and, of course, the diving and as this world-class location is only 5 hours by direct flight from the UK, it is almost in our back garden.

Unfortunately, since the 2015 explosion that downed a Russian passenger plane, direct flights have been suspended as the bomb was, allegedly, placed on board at Sharm airport but you can still get there via Cairo. The upside of fewer divers is that the corals are healthier. All the fish that were scared away by flocks of tourists have returned, there are cheaper hotel rates and no crowds.

Go, you will never ever regret it.

Andrew Comben, Chief Executive of Brighton Dome and Brighton Festival, shares his vision for the future of arts and culture in Brighton....