READ NEXT
Are You Paying Too Much For Your Pest Control? 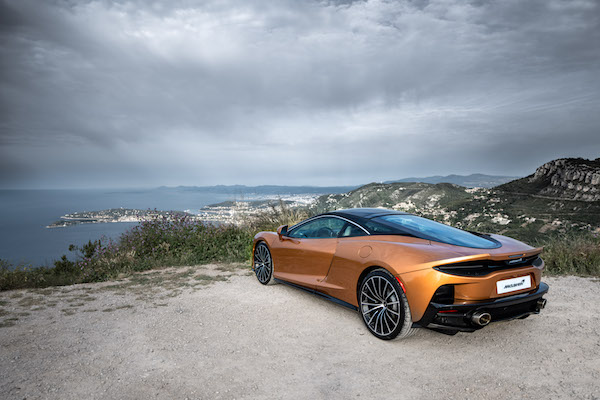 The all-new GT arrived on my doorstep for a week of fun and games and, more importantly, a judgement on what this first McLaren Grand Tourer is all about. A GT is intended for comfortable, long distance travel and all the bells and whistles you need to make a run from London to Monaco a delight.

A supercar that tries to be a grand tourer is a tough ask as something has to give. Supercars do not generally rate comfort and features at the top of their list but GT’s certainly must. Many of the current GT’s have their engine in the front and you are pulled to Monaco whereby the McLaren is rear engine and pushes you there. This makes little difference on the motorway but in corners, you want it read-engined to gain that fine balance. The GT weighs in at only 1,530kg and offers 620bhp so we have a great weight to power ratio, but Macs are not known for their luggage carrying prowess. Here we have an area to the rear, above the engine and under a glass panel, with a clever layer of insulation fabric and cooling ducts to ensure everything doesn’t melt, and it’s big enough to take a set of golf bats or two small cases. Up front, we have the standard area in the ‘bonnet’ to take a small flight case or two and that is it. But as a very strict two-seater, this is probably enough for a long weekend as long as you pack light and the hotel has an iron!

They have raised the car height so that road humps don’t remove the front spoiler and the cabin is definitely quieter than previous models so you can hear the radio, and hold a conversation. The suspension is softer too and the cabin is slightly better trimmed and more comfortable. The result – l could definitely drive to Monaco (and back) with few issues and having done over 900 miles in it, l virtually did the distance too.

It has been ‘smoothed out’ in that it does not possess the aggressive stance of other Macs, and the exhaust will no longer wake the dead. Having said that, it sounds great but l do miss that aggressive design – that thing that makes a supercar a supercar. Wide haunches, flared wings, thumping great cooling ducts, mad spoilers and the like but this is a GT after all.

The most important thing is what is it like to drive? Awesome is the answer. It turns like few others and once into that bend, you realise that the powered steering is in a class of its own. It is totally flat in all corners and puts the power down in such a linear fashion that you wonder if there are little men underneath pulling levers. It doesn’t understeer, and l could not get it to oversteer either, and it feels alive in your hands and with perfect balance, it pivots around your hips.

Having said that, it’s solid as a rock on the motorway, at any speed, and is easy as pie to drive – until you open the taps. Switch off the Sport and Active modes, and it is quite docile and tame. Switch everything back on and take to a winding B road and it comes alive as if you have poked a sleeping tiger with a cattle prod. Your courage runs out long before the car does and a quick burst to 180mph (on a track of course), and it felt steady, settled and ready for more – much more. It is not the psychotic delirium of the 720S but then this is a GT. It does benefit from the same V8 4.0-litre turbo unit from the 720S, albeit with smaller turbochargers and high-compression pistons and Pirelli has supplied a new P Zero tyre that has a much wider ability, especially in the wet

The only recommendation here is take the ceramic brake option as these steel brakes do the job but do not instil you with supreme confidence. Inside, we have the theatre of the dramatic wing doors, and why not, and the seats hold you firm but l would have liked a few more seat adjustments. There is no up and down for shorter drivers and it would be nice to have a separate adjustment to bring the side bolsters in to hold you tight in hair-raising corners but having said that, it does the job just fine. There are an assortment of different leather and stitching options, and they are all fab, and the switchgear is all very McLaren, meaning it is all at hand and unique to the Woking based company. The reversing camera screen is, to my mind, in the wrong place. Instead of being in the centre screen, it appears in front of you in the main cluster, therefore when reversing and turning the wheel, highly likely of course when reversing into a space, the chunky steering totally blocks the camera and you find yourself moving your head back and forth to see what’s going on.

Due to the narrow cabin, the centre console doesn’t have much storage space beyond a narrow armrest box and twin cupholders, and a small glovebox and a net. The wing doors don’t have pockets either. So overall there isn’t much room for the general stuff that accompanies you on a journey. It really is a challenge to find where to put things - in a standard supercar this is not really a problem but if l am driving to Monaco, it is. The addition of a glass panel over the cabin offers an airy and bright cabin.

The fuel tank is small at just 72 litres and for a GT, this can be a problem as you will be stopping for fuel often en-route to Monaco. Of course, this keeps the weight down but at the cost of countless long-run fuelling stops.

McLaren is trying to tempt folks out of the existing true GT’s, like the Bentley and Aston but it should be considered that those who can afford the base price of £163,000 will likely have children and, although long runs without them can be a joy, l know only too well that often, there is no escaping them. It might be fair to say at this price you would have another car but still. Although there have been rumours swirling around for a while now about a McLaren four-seater, there is no sign yet. Make this a four-seater and you have a class leading, world beating true GT that will leap toward the horizon like no other and leave virtually everything in its considerable wake.

77 Why Should We Celebrate Difference?

Differences are what define us, bind us and make us all beautiful and complex beings. Differences should be celebrated because when...