READ NEXT
Who will pay for Covid? 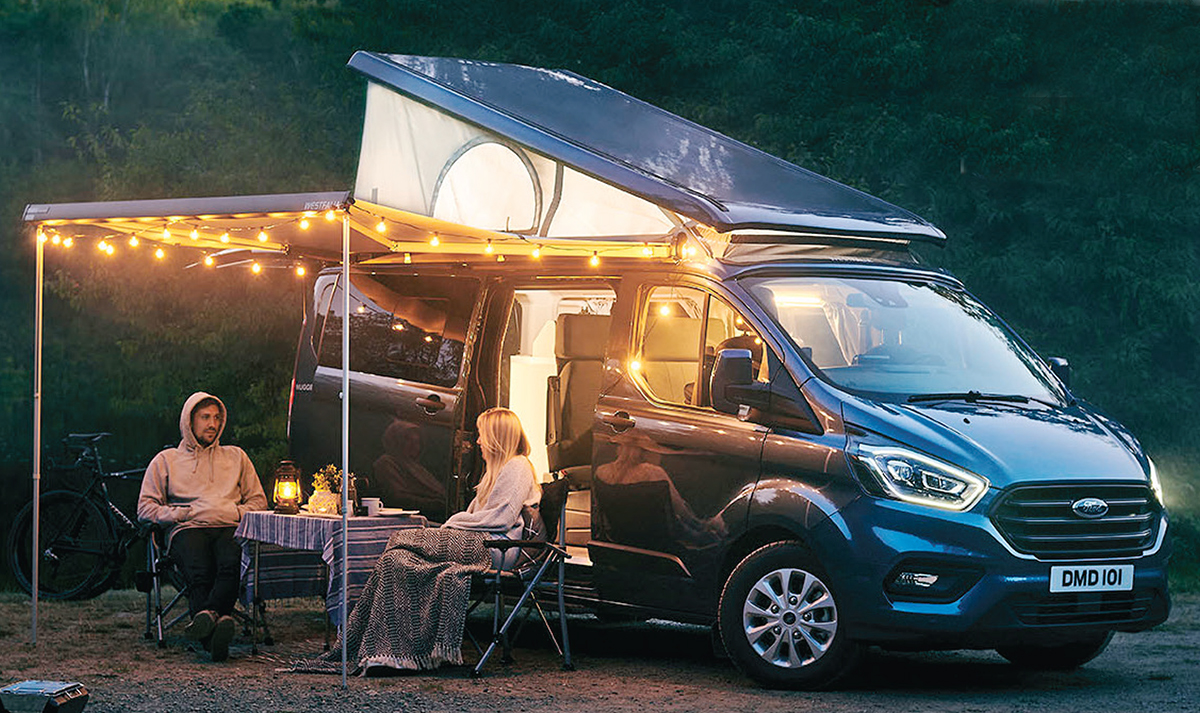 Campervans have always held a certain mystery and romance to many and l have to admit that l am one of them but often like the idea more than the practice. I ventured into this life many years back when l drove a classic Winnebago RV from LA all the way down the Baja peninsular in Mexico to La Paz and Cabo san Lucas.

It was certainly a fantastic adventure, with the Sea of Cortez on one side and the Pacific on the other, through a fascinating desert, with the most important factor - 35 degrees of heat. When Ford asked me to review their new model in this sector it was November and, as expected, cold, damp and miserable but l am always up for a challenge. So after lying to my partner that we had the latest Bentley outside, we ventured forth.

The first thing to note with all campervans is that there is little doubt that they lock someone into a room with serious OCD and give them the design of the base vehicle, and the complete list of everything that has to be crammed in, and leave them with it.

Lord knows how long it took but everything has to have a place and with such limited space, he had better be damned smart about what goes where.

The Ford Custom Nugget is a Transit van converted into a campervan and as the Transit van is one of the best selling vans on planet earth, it should be quite a good base for a bit of outdoor living.  For those with the Bongo Friendee, here’s another one with a daft name.

The benchmark for such vans is the VW California – a model with a long and illustrious history that has become achingly cool as the ‘surfer dude’ van. I reviewed that a few years back and it was great fun so Ford has quite a battle on its hands. The famous conversion company Westfalia have done this conversion so that’s a good sign.

First impression is that it drives really well. With its 2-litre EcoBlue engine allied to a 6-speed auto box, it is quick, sturdy and doesn’t feel as heavy as it obviously must be. I spent a couple of days in town with it before we departed, and it is easy to flick around town, quite easy to park with reversing cameras and sensors, and huge wing mirrors - l was tempted to pick up a box of Yorkie bars for the journey (those of a certain vintage will recall that commercial), yank my trousers down so you could see my arse crack and wolf whistle at every woman that strolled by.

The first very clever arrangement is the kitchen. Instead of being down the side of the van like the VW, they have placed it at the very back by the huge rear door. It is very well equipped with gas cooker, fridge, sink, hot water, plenty of drawers and cupboards and a shower! You have to be standing outside to take the shower and god knows what your fellow campers would think, standing there with your tackle out, singing Nessun Dorma when they wake for their morning cornflakes, but as l had zero intention of having a shower, or singing, it didn’t really matter. A great addition though when coming off a sandy beach, rinsing the dog or actually taking a shower.

It also has a retractable awning that extends from the roof to make a shaded area, and then tucked away very cleverly in the rear door is a table and chairs. In the summer, this would make an excellent area that effectively extends the inside outside. We had zero intention of cooking but we did make cups of tea and it is all very civilised, easy and close at hand. The gas bottle is internal and is next to the water on/off switch and, once you know where it all is, it is straight forward and well designed.

As cold was the biggest problem we faced in this very ‘out of season’ test, I had hopes of a decent heating system as without it, l was headed straight back home and l was not disappointed. The heating system does not run off the battery so there is no fear of being dead in the morning, instead it uses some of the fuel in the tank and can run all night if you so desire. The cabin was 100 degrees within minutes and l realised l would stay.

Mid-cabin, you have the rear seats that move back and forth to make the second of the double beds. For inside dining, the two front seats rotate 180 degrees and then the rear seats push back and a table is then placed in the centre and you have a decent 4/5 person dining room. To ensure the front seats will swivel, they have had to design the handbrake to ensure that when it is fully on, it is not in the up position.

As to the second double bed, that takes a tad more effort. Above the kitchen is the latch that makes the roof rise up revealing a double bed with three zipped windows. Then, in yet another cupboard, is the mini ladder that enables you to climb up there without putting your feet all over the kitchen cabinets. It’s a neat arrangement and the bed is quite comfortable, and bear in mind l say this during the wind and the rain of a British November! With a good duvet, it is warm and cosy although the lack of any USB ports up there does mean phone and tablet charging is a faff. There are only two USB’s in the whole vehicle which for four people is not really enough especially if there are kids involved.

And on that issue, why oh why do manufacturers boast the vehicle is a WiFi hotspot when it never actually works? Really, l have never managed to get one working and here is no exception. We did manage to get it on the phone but then were referred to the website (signal required) before it dropped out and it noted we had to pay for something. Several attempts later and we gave up as life is just too short and just did a hotspot off the phone to watch anything on the tablet.

I was concerned about the lack of standing height in the cabin as when the top bed is ready to go, it hinges from the front and therefore offers good standing room in the a kitchen but not in the cabin. I have just found out that l missed a switch, as the roof actually has the ability to rise in one piece and therefore raises the cabin head room significantly - there goes one of the only bitches l had about the Nugget. Well, two as the name is still an issue and to make its worse in the test model they sent me, the number plate says nugget!!!

In summary, this is an excellent vehicle that is already selling really well in Germany apparently. The pandemic has led us all to reconsider vacations for 2021 and the ‘staycation’ market looks to explode, much to the delight of long-suffering hotels around the UK. I hear that holiday park homes, boats, cabins, canal barges and the like are selling like hot cakes and the motorhome market is no different.

Excluding the weather, we had a great time in the Nugget and l can imagine cruising the length and breadth of the UK in it with ease and being able to stop anywhere you choose, without the hotel bills, it is very tempting. As it drives so well, it could then be used almost as a daily driver as it just looks like a Transit van.

The challenge is the competition, in the form of the VW California and the new Mercedes-Benz Marco Polo. The VW starts at around £56,000 but you will need to spend north of £65,000 for all the kit and the Merc will drain you on £59,000. Where the Nugget trys to excel is the sliding doors on both tries of the van, unlike the others, and and the well-equipped kitchen. On the top model you can also have a loo which the others certainly do not offer. Having said that, the base price is £62,726 so l am not sure there is enough price gap to stop you from looking at the other two models and that could be a problem for the Ford.

81 Why disrupted business environments need a new type of leadership

Dr Zahira Jaser, Deputy Director of the Sussex MBA, explains why now is the right time for local businesses to partner with the University...