Hail the 46th President of the United States 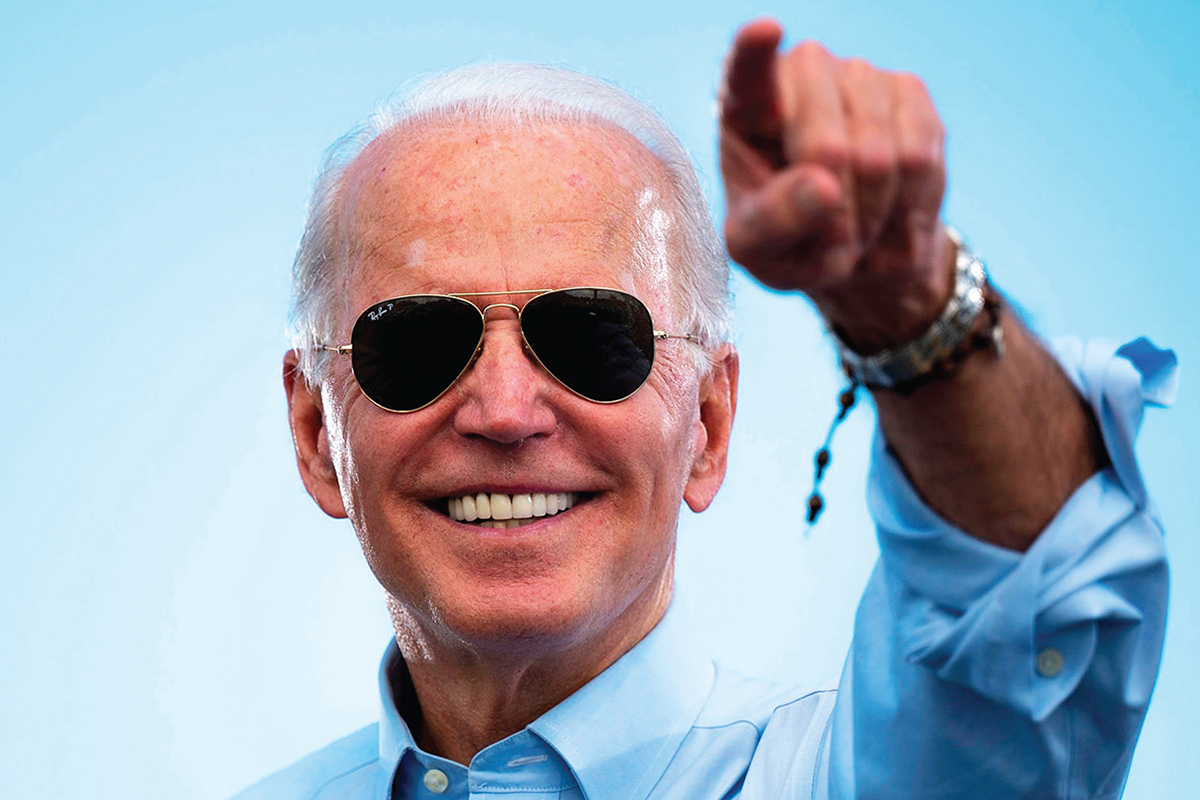 The former vice-president, now the 46th President of the United States, says he can build on the Obama legacy and unite the country in a challenging time. Biden has tried to become president for three decades. That dream is now a reality. He had what it takes to win – but does he have the stamina for four years in the White House?

He is America’s oldest president, aged 78 and his life has been dogged by personal tragedy.

In 1972, shortly after he won his first Senate race, he lost his first wife, Neilia, and baby daughter, Naomi, in a car accident. He famously took the oath of office for his first Senate term from the hospital room of his toddler sons Beau and Hunter, who both survived the accident. In 2015, Beau died of brain cancer at the age of 46. The younger Biden was seen as a rising star of US politics and had intended to run for Delaware state governor in 2016.

The elder Biden has credited Beau with encouraging him to run again, and during the campaign has used both tragedies to explain why healthcare – one of his signature policy goals – is “personal” to him. Biden garnered considerable goodwill following Beau’s death, which served to highlight his central strengths: a reputation as a kind and relatable family man.

His ability to rise above that tragedy is well known by Americans. He was determined to see his boys every night, taking the hour and a half train journey from Delaware to Washington at the start and end of each day to say goodnight to them.

When others might have fallen apart, Mr Biden found the strength to carry on both then and when ill health and more tragedy struck later in his troubled life. He suffered multiple aneurysms in 1988, surviving one nine-hour operation to save his life.

He has said how his father frequently said: “Champ, the measure of a man is not how often he is knocked down, but how quickly he gets up.” But there is also a sense of fatalism about him. He is quoted as saying he believes that life balances out people’s suffering and fortune – “the bigger the highs, the deeper the troughs”.

He had seemed to be heading for another trough at the start of 2020 as his campaign to become the Democratic presidential contender began to flounder. He had entered it
the front-runner as a former vice-president, but by February the campaign’s wheels were spinning and the candidate was sometimes lost for words and almost doddery on the trail. But then his fortunes turned again. Having looked in serious trouble in Iowa, he seized victory a month later in South Carolina, setting himself on the path
to victory.

The fiercely-contested primary season has tested Biden. He has been accused of “handsiness” or a tendency to invade women’s personal space and there is plenty of awkward footage making the point. His friends and supporters say his tactility springs from his warmth and empathy. But during the campaign he was forced to admit his behaviour was no longer appropriate. In a video statement he told voters, “I get it, the boundaries of personal space have been changed”. He has also denied accusations by former Senate staffer Tara Reade that he sexually assaulted her in 1993.

The woman who is now his vice-president, Kamala Harris, criticised his support for segregationists early in his career when he joined them opposing school bussing to racially integrate schools.

And his drafting of the 1994 crime bill that led to mass incarcerations, lengthy jail sentences and the proliferation of more and more prisons has dogged his political career ever since.

Mr Biden can have a clumsiness with words while at the same time being an accomplished debater. His gaffes or “Bidenisms” are legendary and he has appeared at times decidedly out of touch.

The jury is out as to whether they have weakened him among voters or endeared him in this election.

He has borrowed words, too. Most notoriously in 1988 when he plagiarised a speech by Neil Kinnock word for word. To be fair he had credited the former British Labour leader on previous occasions but at least once seemed to present the words as his own.

But he was able to play on the strengths of a lifetime in public service to rout his Democrat rivals and present himself as the competent alternative to Trump, a seasoned steady hand on the wheel in a time of plague and chaos.

Eight years as vice-president allows him to claim Barack Obama’s successes as his own both at home and abroad.

Those who know him from those years say it’s his length of service and what he’s gained from it that makes him stand out as a president. Sir Peter Westmacott, who was British ambassador to the US during the Obama years, said: “He’s old for a presidential candidate, that’s for sure. But he’s hugely experienced. He’s got an extraordinary wide range of contacts around the world. He does know a great deal and cares a lot
about different countries that he’s got to know. He will be a man who understands that in many areas he needs to have young capable people to whom he can delegate rather than try to do it all himself. I don’t think he’ll have any illusion about that.”

The length of Mr Biden’s career has won him support in demographics that were the key to victory in this election. His close relationship with America’s first black president has further cemented his support among African Americans. He sees himself as the champion of the blue-collar white voter and hopes that will give him an edge. He will need to maintain the support of ardent Democrats and engage the backing of others who have drifted away from his party or even moderate Republicans disaffected by the Trump presidency. His pitch is to restore and build on Mr Obama’s legacy and unite a divided country after the turmoil of the Trump years.

What kind of president can we expect?
His first priority will be dealing with the pandemic. He has been sharply critical of Mr Trump’s handling of the virus.

A Biden presidency will need to sort out the testing debacle and control the virus sufficiently to allow the US economy to break free from lockdown.

His supporters warn against assuming his presidency will be simply a restoration to the Obama era, just a correction from the Trumpian aberration. Those advising him on economic policy say it will be radical, almost Rooseveltian in terms of spending and investment both to overcome the impact of the pandemic and deal with climate change. He wants to spend $2trn putting America on the path to eliminating carbon emissions by mid-century.

Given his family’s tragic history and his own brush with death, it is no surprise that he is placing a lot of emphasis on health.

As he put it in an early TV ad, healthcare is “personal” to him. He hopes to reinforce Mr Obama’s reforms to healthcare but stops short of the “healthcare for all” proposals advocated by his former Democrat rival Bernie Sanders and others on the more progressive wing of his party.

On the world stage a President Biden is likely to try and restore America’s place at the centre of the multilateral rules-based world order that the US has led since World War II after the years of President Trump’s more isolationist economic nationalism.

As a former vice-president and chair of the Senate foreign relations committee, he is a firm believer in the Pax Americana and has spoken out against the damage Trump has done to America’s standing in the world.

His challenges on that world stage will be considerable. The world has moved on since he was vice-president. China has grown in power and tensions have increased between the two super powers. Europe is not the same since Brexit and the rise of populist parties.

And the Middle East has changed under Trump. Trump has moved the US embassy to Jerusalem, discarded the Iranian nuclear deal and brokered a deal normalising relations between Israel, the UAE and Bahrain. How much of that will Mr Biden try and reverse?

Mr Biden harks back to a possibly lost age at home too. He has talked of restoring the spirit of bipartisanship in American politics.

The founding fathers designed a system of government that works only when there is some sense of compromise. That has been lost in the bitterly adversarial politics of both the Obama and Trump years.

Biden says he wants a return to co-operation across the aisle on Capitol Hill to solve America’s pressing problems. If anyone has the experience, charm and friends in both parties to dispel some of the bitter antagonisms of the last two presidencies it may be him.

But while Trump was born into wealth, Mr Biden started life in the blue-collar town of Scranton, northeast Pennsylvania, the son of a used car salesman. His low key beginnings and the challenges of a tragic life have given him a tough strength of character and sense of decency say those who know him well.

He may not be known for soaring oratory but words to comfort and console a grieving nation will come to him more easily than most.

His rival calls him sleepy and slow. His friends decent and full of humanity. There is none of the excitement offered by Mr Trump or the hope and change inspiration promised by Mr Obama.

At the age of 78 President Biden will need all the strength of character he can muster if he wants to fulfil his dream.

And in the eventuality that he does not or cannot complete his term in office, we will then have the first female president of the United States in Kamala Harris, and that will be a fascinating turn of events in world history.

82 The art of effective remote leadership

There are various ways to look at how our current pandemic situation occurred: • It could be that someone stored a virus...

82 Cyber security - then and now

Don’t be an ostrich. Cyber has evolved. Has your cyber security? By Scott Nursten, ITHQ...