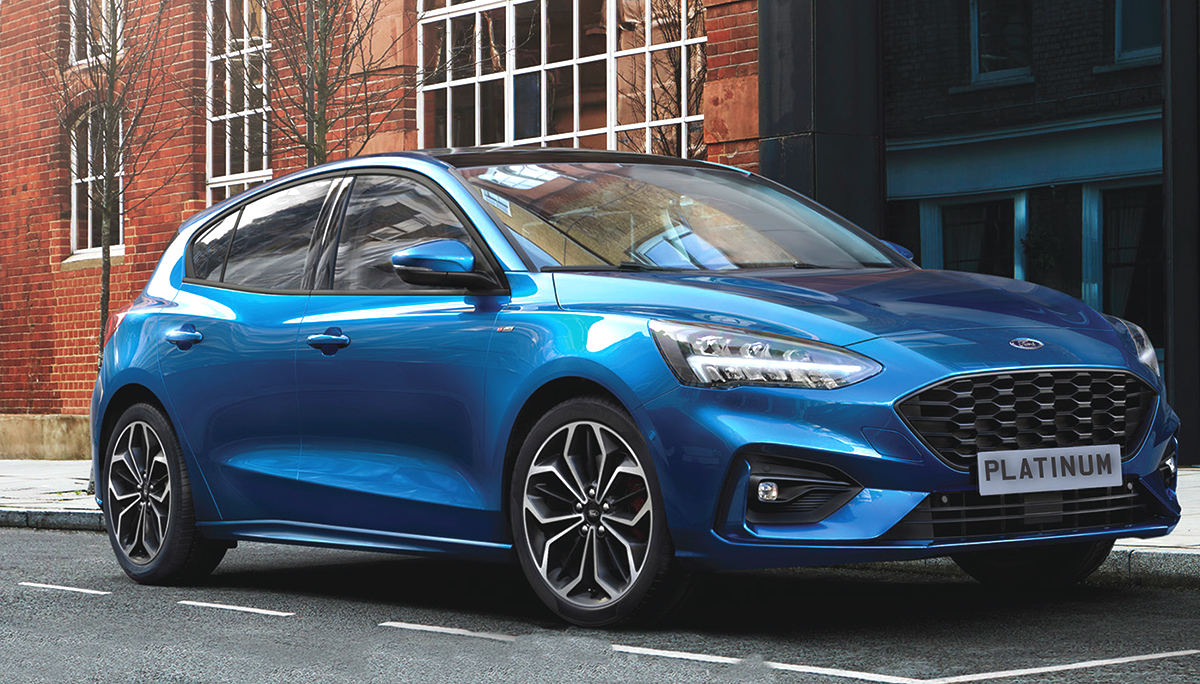 It never ceases to amaze me quite what kick the engineers manage to get out of a 1.0-litre engine these days. Its the same thrust we used to get out of 3-litre cars back in the day. The new Hybrid Focus sits right in that category.

As Ford stated: “Our electrified powertrains are designed not just to save drivers money on fuel, but also to boost the fun-to-drive character of our vehicles” said Roelant de Waard, vice president, Marketing, Sales and Service, Ford of Europe. “The Focus EcoBoost Hybrid seamlessly integrates electric and petrol power for efficiency and performance that would have seemed the stuff of dreams just a few years ago.’ I can’t argue with any of that

The new Focus is a really good looking car and as if that kick was not enough, they have now tied it to a 48-volt starter generator to give it that turbo like boost – or to be accurate, to get over any turbo lag. The 0-60 time is only 9.2 seconds but it feels an awful lot faster than that. There are two choices of power unit – the 123bhp version and the 153bhp EcoBoost Hybrid that l have in my hands.

Like most manufacturers, Ford have stuffed every trick in the book into this car to eek out the fuel. Even with the clutch depressed, the engine will switch off if coasting at less than 15mph and the dash has enough information to make your head spin and want to switch it all off. But it all works, and the claimed 53.3mpg is very close to the mark.

Fuel economy also gets a boost from the new Focus’s slippery shape. Aerodynamic measures include an active front grille shutter for when engine cooling isn’t required, front bumper vents channeling air through the body to smooth turbulence around the front wheels, and a number of underbody shields to calm airflow beneath the car. Ford and Michelin have also teamed up to introduce a new line of tyres that cuts rolling resistance by a fifth.

I must say that the ceaseless off-beat thrumming of Ford’s smallest engine can grate quite quickly and the regenerative deceleration is just intrusive enough in stop-start situations to have you reaching for the off switch. When l first tried a three-cylinder engine in the Fiat 500, l compared it to the sound of a hairdryer – a fast and nippy hairdryer and you get the same engine note here but then l guess the younger generation won’t notice and that makes me a dinosaur l guess.

The drive is smooth but there is a little too much suspension crashing for me and this only becomes more intrusive the longer the government refuse to fill the 3-mile deep potholes that litter the country.

The interior is well laid out in typical Ford fashion - nothing flashy but it is all there and it all works. The infotainment system with the SYNC system is good and the phone pairing is one
of the fastest l have come across. It benefits from a HUD (head up display) but it is a piece of glass that rises up out of the dash in front of the driver.

It might be better than nothing as HUDs are a great addition to any car but l would rather pay an extra couple of quid and have the proper version that sits in the dash unknown to the driver and projects speed, road limit and often satnav instructions onto the windscreen.

All these claimed benefits stem from an all-new vehicle architecture. The Blue Oval’s latest C2 platform positions the wheels closer to the corners of the car, compared with the previous Focus, extending the wheelbase and allowing more space for occupants. Rear passengers benefit from plenty of leg-space and shoulder room, but people up front will appreciate a dashboard pushed 100mm closer to the engine too.

It’s also lower, reducing the ratio of bodyside to wheels (which range from 16- to 18-inches in diameter). These revised proportions make for a more muscular, sporting look. Wraparound lamps front and rear make the car appear wider, and the sheet metal has an array of creases that catch the light and the eye, such as the undulating line from grille to tail-lamp that carves a concave channel in the bonnet’s edge. It’s a really good looking five-door hatch with great presence.

Every Focus gets adaptive drive modes, adjusting the throttle, steering, transmission and cruise control programmes between Eco, Normal and Sport modes. SLA-equipped models can be coupled with Continuously Controlled Damping (£650-£800) which can adjust the damping force every two milliseconds to vary ride comfort. There is also an estate (wagon) and who knows if we will see the barnstorming RS version?

The new Focus is a good looking car, very fuel efficient and really nippy round town. I have a slight problem with the £27,155 start price of my car as for a Focus that seems quite expensive but the range starts from £17,930 so you get what you pay for.

Quite how long the life is of hybrid models is anyone’s guess in this world of full electrification, as the governments ban on fossil powered cars also includes hybrids but, in true government fashion, they have changed this rule so many times that Albert Einstein couldn’t work out what they actually intend to do.

PS: As l write this, Ford have just announced that from 2030, all their cars will be electric or hybrid following Jaguar’s lead.

83 Welcome to the Bamboo Club