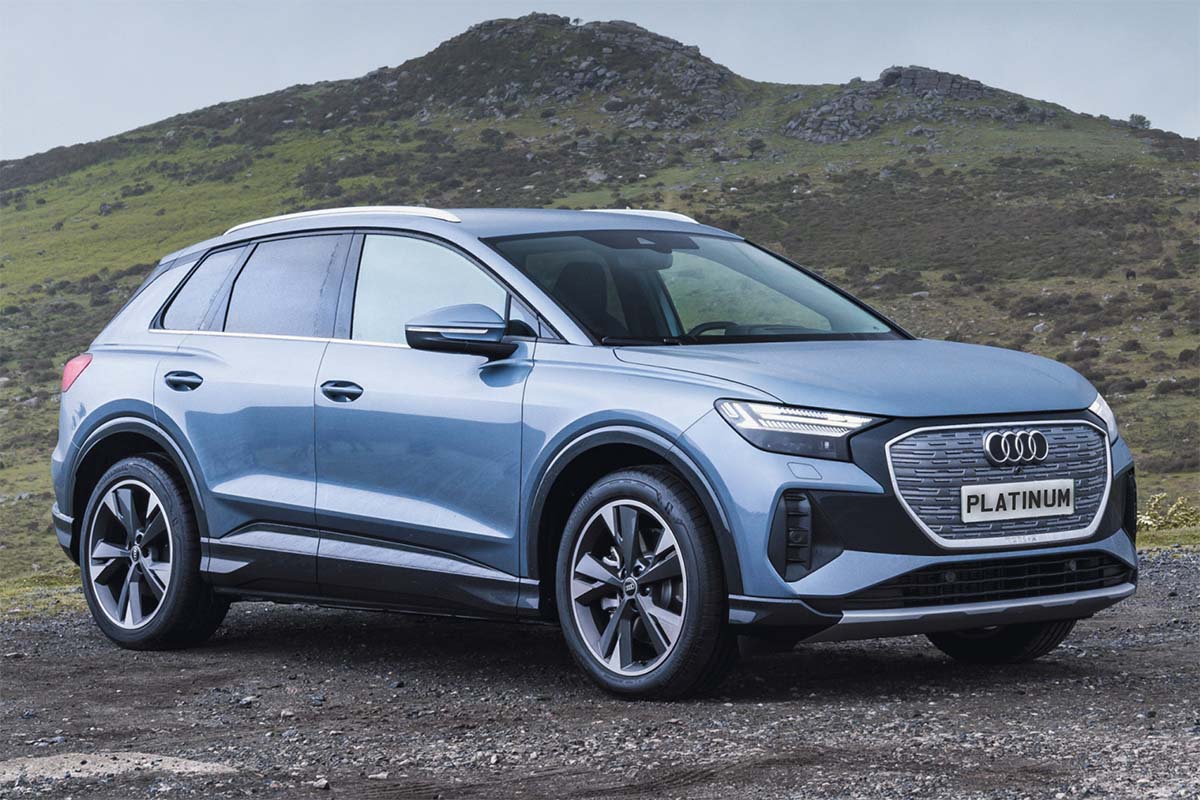 The Audi Q4 sits between the Q3 and Q5 (obviously) and the complexity of all these model names continues to bore me. With the identikit routine now in full swing, this model has the MEB electric platform. Therefore it is a VW ID.4 and a Skoda Enyaq but with a different party frock.

I don’t know about you but l do not understand why, having spent billions on designing their oil burning cars, why so many manufacturers decide to start all over again with the design of their electric cars. Surely, just rip out the oil burner, pop in the electric motor and off we go. But no, we have a range of daft looking EV’s on the market. Except here.

The Q4 is essentially the petrol Q4 and that is a very good car. Therefore, this is the perfect first EV as you will notice little difference – apart from the silence and the lack of need to visit a petrol station, taking out a mortgage for every fill.

The Q4 has a smooth ride, sits well on the road, corners well regardless of the extra weight of those batteries and is very well put together. Often the issue with such silent cars is that you then hear all the squeaks and rattles from the rest of the interior but here you have the testament to German engineering – everything is silent.

It is not the quickest EV out there but then you have little temptation to cane it and watch your electricity drain away. But it is quite quick enough, with a really comfortable interior, everything to hand and that slightly higher driving position that buyers today seem to love. It is far less at home attacking country roads than cruising on the motorway but it is difficult to argue that this is a very good EV. And then we come to the elephant in the room.

I know l am odd as l only have these cars for seven days and therefore l don’t have a charger at home, but even if you did and you do more than the claimed 298 miles per charge, you are going to need a public charger. Here the fuming anger starts. The total and utter incompetence of the UK’s charging network comes into full focus.

On one journey to Marlow, l charged the car at a supermarket and then got a £60 fine for staying too long! And the charge failed halfway through so I only received 100 miles. That got me to Marlow but on the return, l stopped at Beaconsfield services on the M40, to find that three of the six chargers were out of order, ‘no tap and pay’ so another app added to the six l already had!

But that didn’t work either. After crawling so slowly that l could have been fined for driving too slow on a motorway (that would be a first), I limped into Cobham services on the M25. Again, three of the four chargers were broken and someone was on one that was working. Infuriatingly, it appeared they had gone off to do their weekly shopping as they returned an hour after their charge had completed. Finally l got onto the charger and was merrily informed that it would take 6.3 hours to charge. Sorry!

The car literature states that l can get 80% charge in 38 minutes and l am sure somewhere on the planet l can but not anywhere near the South of England it would appear. So we waited 2.5 hours to get enough juice to limp home. It reminds me of the last time l reviewed a Tesla. In Brighton, l needed one of their famed fast chargers and, after calling Tesla, was told the closest one to Brighton was on the Isle of Dogs!!

My journey back from Marlow took 4.5 hours, including getting soaked in the rain as l tried to get the blasted things to work, fat as a house as we ate three meals to pass the time and l now have more charging apps on my phone than contacts.

I am fully aware that when the Model T Ford was introduced, there were probably very few petrol stations as it takes time for the system to catch up to the sales of such cars. But that was 1908 –surely in 114 years we should be able to do better?

What do you think are women’s top pet peeves when it comes to fashion? I’ll go first – a lack of pockets on everyday...