READ NEXT
Invest in young Surrey 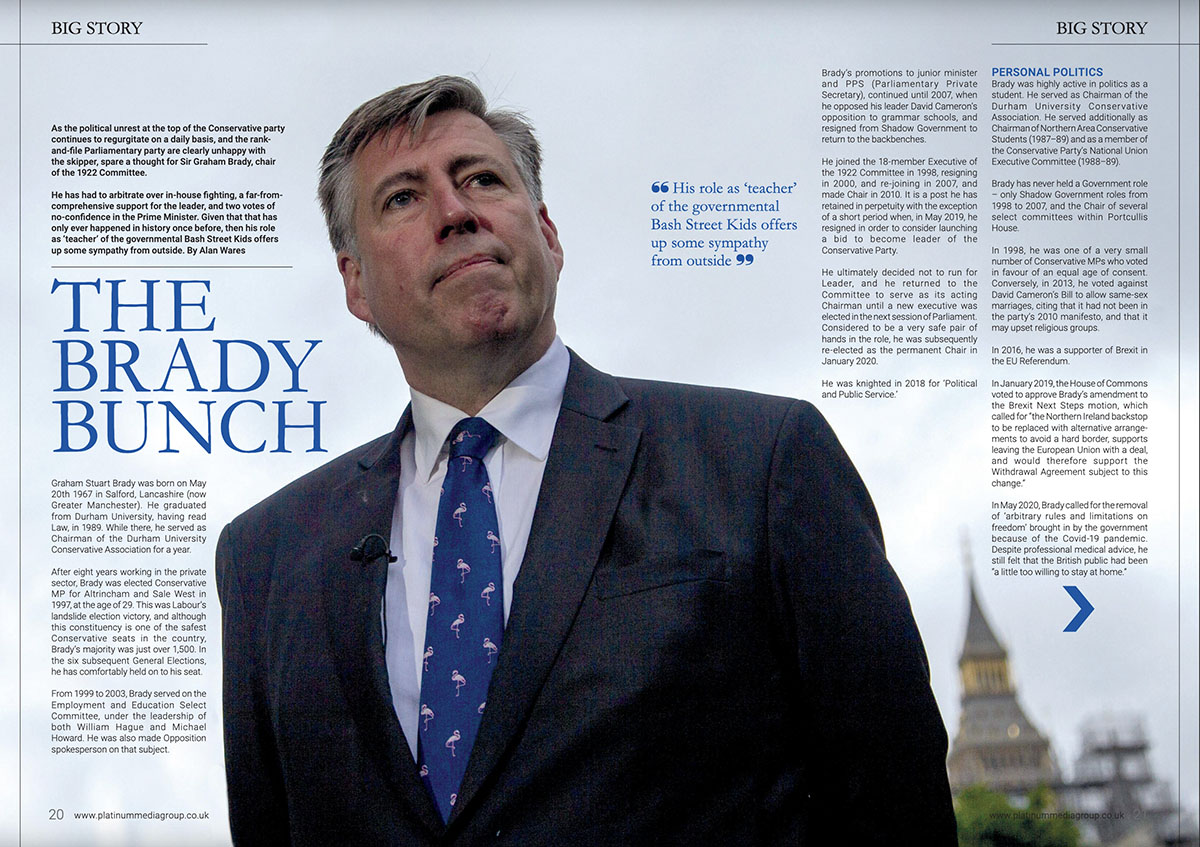 As the political unrest at the top of the Conservative party continues to regurgitate on a daily basis, and the rank-and-file Parliamentary party are clearly unhappy with the skipper, spare a thought for Sir Graham Brady, chair of the 1922 Committee.

He has had to arbitrate over in-house fighting, a far-from-comprehensive support for the leader, and two votes of no-confidence in the Prime Minister. Given that that has only ever happened in history once before, then his role as ‘teacher’ of the governmental Bash Street Kids offers up some sympathy from outside.

Graham Stuart Brady was born on May 20th 1967 in Salford, Lancashire (now Greater Manchester). He graduated from Durham University, having read Law, in 1989. While there, he served as Chairman of the Durham University Conservative Association for a year.

After eight years working in the private sector, Brady was elected Conservative MP for Altrincham and Sale West in 1997, at the age of 29. This was Labour’s landslide election victory, and although this constituency is one of the safest Conservative seats in the country, Brady’s majority was just over 1,500. In the six subsequent General Elections, he has comfortably held on to his seat.

From 1999 to 2003, Brady served on the Employment and Education Select Committee, under the leadership of both William Hague and Michael Howard. He was also made Opposition spokesperson on that subject.

Brady’s promotions to junior minister and PPS (Parliamentary Private Secretary), continued until 2007, when he opposed his leader David Cameron’s opposition to grammar schools, and resigned from Shadow Government to return to the backbenches.

He joined the 18-member Executive of the 1922 Committee in 1998, resigning in 2000, and re-joining in 2007, and made Chair in 2010. It is a post he has retained in perpetuity with the exception of a short period when, in May 2019, he resigned in order to consider launching a bid to become leader of the Conservative Party.

He ultimately decided not to run for Leader, and he returned to the Committee to serve as its acting Chairman until a new executive was elected in the next session of Parliament. Considered to be a very safe pair of hands in the role, he was subsequently re-elected as the permanent Chair in January 2020.

He was knighted in 2018 for ‘Political and Public Service.’

Brady has never held a Government role - only Shadow Government roles from 1998 to 2007, and the Chair of several select committees within Portcullis House.

In 1998, he was one of a very small number of Conservative MPs who voted in favour of an equal age of consent. Conversely, in 2013, he voted against David Cameron’s Bill to allow same-sex marriages, citing that it had not been in the party’s 2010 manifesto, and that it may upset religious groups.

In 2016, he was a supporter of Brexit in the EU Referendum.

In January 2019, the House of Commons voted to approve Brady's amendment to the Brexit Next Steps motion, which called for “the Northern Ireland backstop to be replaced with alternative arrangements to avoid a hard border, supports leaving the European Union with a deal, and would therefore support the Withdrawal Agreement subject to this change.”

In May 2020, Brady called for the removal of ‘arbitrary rules and limitations on freedom’ brought in by the government because of the Covid-19 pandemic. Despite professional medical advice, he still felt that the British public had been “a little too willing to stay at home.”

He was against a second lockdown, citing increased mental health issues, including the risk of increased suicides and domestic abuse, as well as excess deaths due to reduced access for care.

Brady is also a steering committee member of the lockdown-sceptic ‘Covid Recovery Group’ - a group of Conservative MPs who opposed the government’s second lockdown in December 2020. They were criticised as an ‘echo’ of the European Research Group (ERG) of MPs, and a response by backbench Conservatives to Nigel Farage’s anti-lockdown Reform UK party.

In the end, the leader of his party enacted the illegal breaking of lockdown rules anyway.

Brady is patron of the Counselling and Family Centre in Altrincham, and a trustee of the Jubilee Community Centre in Bowdon, Greater Manchester. He is a keen supporter of Stockdales, a charity supporting children and adults with learning disabilities in Manchester.

FAMILY ROLE IN WESTMINSTER
Following the Daily Telegraph’s extraordinary 2009 exposé into MPs’ expenses claims, attention was drawn to whether it was appropriate for MPs to employ members of their family within Westminster.

This was highlighted when Conservative MP Derek Conway was alleged in 2007 to have paid his son, a student at the time, using public funds despite little evidence of his having done the work he was supposed to.

With that in mind, Sir Graham Brady employs his wife Victoria, whom he married in 1992, as his senior parliamentary assistant, with one of the highest reported salaries for that role.

As a piece of tittle-tattle, it raises eyebrows, but the fact is, arbitrary accusations of nepotism have little merit, especially if the family employee in question is highly competent in their role. Every instance must be taken on a case-by-case basis - as per the issue with Derek Conway 15 years ago - but any thoughts of banning family members from the role on principle, is akin throwing the baby out with the bathwater.

1922 COMMITTEE
The 1922 Committee - or the ‘Conservative Private Members’ Committee’ to give it its formal name - is a parliamentary group of Conservative MPs in the House of Commons. It was formed in 1923 by the MPs who were elected in 1922. (It is named after the intake year, rather than the formation year).

The committee is made up of all Conservative backbench MPs, and meets weekly while Parliament is in session. It provides a way for backbenchers to co-ordinate and discuss their views independently of frontbenchers (i.e. government or shadow government ministers). However, since 2010, frontbench Conservative MPs have had an open invitation to attend meetings. The committee can also play an important role in choosing the party leader.

The phrases ‘men in suits’ or ‘men in grey suits’, meaning a delegation of Conservative MPs asked to address the leader, is a jocular reference to the 1922 Committee.

PARTY LEADERSHIP ELECTIONS
The Conservative Party can be quite brutal when it comes ousting its leader. Aside from leadership resignations, usually after a General Election defeat, or through ill-health or death, Labour have only had one mid-term political challenge to the leadership since 1961 (and a failed one at that).

In the same period, the Conservatives have brought about five mid-term leadership challenges - including two while the leader was Prime Minister - not all of which have succeeded.

The 1922 Committee has an 18-member executive committee which, led by Sir Graham Brady, oversees the election of party leaders, or any Conservative party-led vote of confidence in a current leader. Such a vote can be triggered by 15% of Conservative MPs (currently 54 MPs out of the 360 sitting MPs) writing a letter to the chairman asking for such a vote.

In the near century-long history of the 1922 Committee, the Chair has had to oversee three votes of no-confidence (as opposed to direct leadership elections) in the Tory party leader. Two of them have fallen on Sir Graham’s watch.

Although Theresa May won her 2019 vote of confidence - triggered by dissatisfaction among Conservative Associations, rather than MPs - it was too small a margin for her to be seen to be an effective leader, and she resigned one month after the vote.

This process was used most recently on June 6th 2022, against Boris Johnson. Interestingly, although he won his vote of confidence, it was by a smaller percentage margin, yet he shows no signs of handing over the reins. The last time a leader lost such a vote was on October 29th 2003, when Iain Duncan Smith was defeated by 90 to 75.

This is different from previous attempted coups. Under former party rules, the Conservatives could have a party leadership election every year. This little-know rule was used by Sir Anthony Meyer in 1989, He did not expect to win;  merely to put numbers on the dissatisfaction among backbench Tory MPs. The incumbent Margaret Thatcher won comfortably. However, another leadership election was held in November 1990.

Although Thatcher won again, like Theresa May 29 years later, it was not seen as enough to win the confidence of the Parliamentary party. She withdrew from the election in the second round, bringing to an end 11 years of her leadership of the country, and 15 years of her party.

John Major unilaterally resigned in 1995, fed up of all the petty bickering in his government party, and immediately re-stood in a ‘back me or sack me’ ballot. Again, only Conservative MPs could elect the leader in those days, and Major comfortably won his own vote of confidence. He resigned as leader two years later after heavy General Election defeat.

All of these procedures fall, or have fallen, under the remit of the Chairman (and so far, only men have had the permanent role) of the 1922 Committee. Since 2010, that has been the responsibility of Sir Graham Brady.

BACKBENCH ONLY
In 2010, the Conservatives formed a coalition government with the Nick Clegg-led Liberal Democrats. Prime Minister, and Conservative party leader, David Cameron, suggested changes to the committee rules to allow frontbench Tory MPs to be involved in the recommendation-forming process. This upset some backbench MPs, who saw - not unreasonably - that the 1922 Committee was for them, and not frontbenchers.

Ministers argued that such a change would be necessary for the Parliamentary party to function coherently, especially as it was in a coalition partnership.

Despite the concern, committee members voted to approve the change, 168-118. However, under the deft, diplomatic skill of Graham Brady, newly arrived in his role as chairman of the committee, he clarified shortly after that vote that although frontbenchers were able to attend meetings of the committee, only backbenchers would be able to vote for its officers and executive committee.

FUTURE CONFIDENCE VOTES
Current Conservative party rules don’t allow for another vote of confidence in the leader for at least a year to the day after the previous vote. There are some in the party who wish to change that rule, though Sir Graham Brady himself has no intention of entertaining that change.

However, with further domestic and transport fuel prices hikes due in the Autumn, the cost of living rises showing no signs of abating, and an inherent disinterest to properly assist the worst off in society from the top of government, Sir Graham may well be busy next summer with worried Conservative MPs concerned over losing their seats in the House of Commons.