Has the Rose Review shown the way forward in encouraging women to set up and grow their businesses? Hosted by NatWest in partnership with Surrey Chambers, the event was facilitated by Sally Pritchett MD of Something Big. Report by Tara Wavre

READ NEXT
Don't be a middle of the road manager 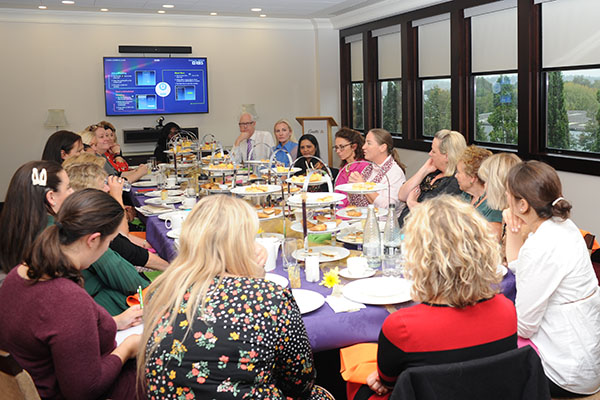 On October 7th NatWest, in partnership with Surrey Chambers, hosted a Round Table at their Guildford offices to discuss funding and mentoring following the ground-breaking Rose Review, released earlier this year.

Gathered together were women from some of Surrey’s best female-led businesses, and with Sally Pritchett from Something Big facilitating the discussion, the ideas were flowing freely, with a carefully selected group of inspirational women sharing their knowledge.

The Rose Review
After a twist on the traditional afternoon tea, courtesy of Mandira’s Kitchen, the session started with an overview of the Rose Report from NatWest Regional Director, Victoria Kerton.

• An understanding of what motivates female entrepreneurs going into enterprise. Often it isn’t about world domination but out of a desire to make a difference.
• Increased funding for female entrepreneurs.
• Greater family care support.
• Expanding awareness and access to support, funding and mentorships.

Access to Funding
Sally then opened up the floor for discussion around the topic of funding, by asking the women what their experience of funding had been so far.

Several of the women in the room had felt unprepared when they applied for funding. They made the point that there is little or no information available on what you can expect when you start this process. This uncertainty, coupled with a concern for the volume of paperwork she’d been asked to produce, led one woman to decide she’d rather do it with her own personal funds. However, she was able to get some funding from Surrey Rural leaders.

Another businesswoman was successful in her funding application, but ultimately declined it as the lenders wanted to secure the funding against her house, which she felt was too much of a risk.

We then heard from a CEO who was currently going through the process of funding with the aim of scaling up her business. She has sought funding from a variety of sources but found that learning the lingo of Angel Investors and VC investors is extremely hard, like learning a new language. She handled all of the legal side of the funding on her own, teaching herself as she went. Like others she experienced a high level of sexism throughout the process and has had to combat damaging false assumptions about who she is.

A number of businesses have found that many investors are only interested in tech companies, unless you are a tech company it can be very hard to qualify for funding. However even tech companies find the process very difficult. One CFO noted that whilst female Angel Investors have been very supportive, they have had to combat a lot of sexism from funding panels. Usually made up solely of men, the questions posed to a female CEO around work/life balance or risk were very different to the questions asked of a male CEO.

It was clear from the discussion that there is both conscious and unconscious bias in the funding process and in the panels, with more diversity and representation required throughout the process.

A big takeaway from the funding discussion is that more women need to ask for funding, and they need to ask for higher values of it. There was recognition in the room that this may stem from a lack of confidence and being less willing to take risks than men. As all the women in the room are successful scale-up businesses their focus might be on supporting the next generation of start-ups through the process, to counter the feeling of unpreparedness around funding applications. Women in the room felt their businesses would be bigger, better or improved had they asked for or been successful in getting funding previously.

Mentoring
The topic of discussion moved on to mentoring and everyone in the room shared their experiences of being mentored and mentoring others.

Something that was echoed around the table was that many of those present never really viewed themselves as ‘women’ in the sense of how sex-based bias might be affecting them in the working world. It is only in retrospect that they have realised things probably were a little bit harder or more challenging than they would have been for a man in the same position.

A mentor can be of great benefit but it is really important to find the right one for you. You should start by working out what your goals are and looking for a mentor who has been successful in achieving these goals in the past. It can be really useful to have more than one mentor so you can get multiple viewpoints and have a range of experience.

Businesses need to consider many different elements and viewpoints but are often unsure about where to get advice. When looking for advice, the first port of call can often be to professional service providers such as accountants or lawyers, however the advice will often not only be costly but may be biased.

Many of the women in the room have found excellent mentors in their business network, amongst friends and family and through asking their bank or Surrey Chambers. If a business is experiencing an issue, the Chambers can connect them with other businesses who have been in a similar situation. Victoria pointed out that NatWest have excellent links with a variety of business support organisations that they routinely connect their business clients to.

What is preventing women from asking for advice? Again it was felt that confidence, coupled with imposter syndrome is what is stopping them, but many in the room have found that there is so much help ready and waiting once you ask for it. But you have to ask.

Conclusion
From the discussion it was clear that women need to ask more for advice and help, often we can let a lack of confidence get in the way. As women, our success in business is often fuelled by our emotion and passion for what we do and it is important not to underestimate the power of an emotional support network, as well as a practical one. Our networks are what make us stronger and empower us to take more risks.

Only by playing to our strengths will we succeed and be able to achieve more. If you play to someone else’s strengths then you won’t get far, but if you use your own you can be brave, bold and take on anything.  The women in the room were all representing successful scale-up businesses and have achieved a high level of success already. It was really powerful to hear them pledge that they will look at supporting and mentoring the next generation of female-led businesses.

Surrey’s neighbourhood policing has been rated as ‘excellent’. We hear from Surrey Police and Crime Commissioner David Munro...