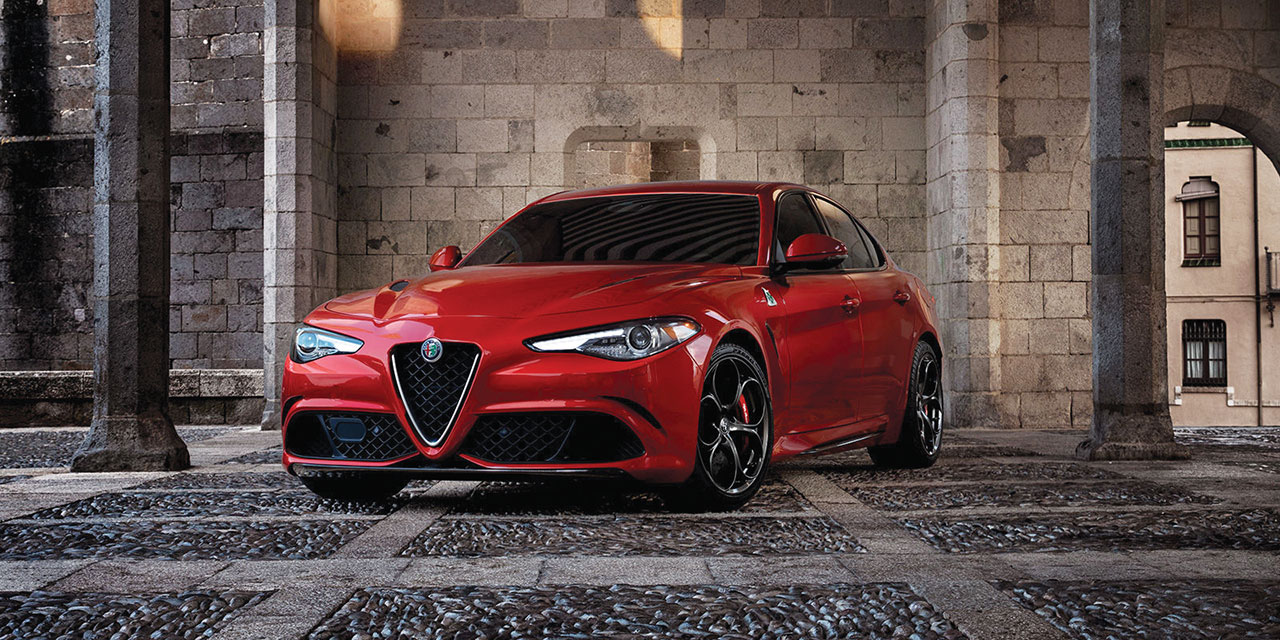 ere l thought l would try to step out of the obvious box and go with something a little left field for our European tour. Step up the Alfa Romeo Giulia Quadrifoglio (four leaf clover to you and l).

Here is Alfa’s new supercar and the most powerful Alfa sedan ever produced. You might hear petrol heads like Clarkson and Evans bang on that you cannot be a true petrol head without having owned an Alfa, which is total poppycock, as in days gone by they were total crap, broke down every five minutes, rusted like the Titanic and your days were peppered with stopping every hour to pick up things that had dropped off. Upon reaching your destination there was more of the car on the back seat than on the bloody car! Yes they were pretty and, when running, went like stink but that is not my idea of a good drive. And yes, l owned an Alfa in the shape of a GTV back in the day but it was a nightmare. So it was with some trepidation that l ordered the QV but the stats are irresistible. A relatively small 2.9-litre bi-turbo engine developed by Ferrari that, somehow, offers 510bhp and 600nm of torque and, as it is all aluminium, it is light and nimble enough to give the other two a good run for their money. The superb 50:50 weight distribution, rear-wheel drive and front engine, offers 0-62 in 3.9 seconds and on to 190mph - this had all the hallmarks of a titanic battle that would get the juices flowing. Oh, and it is half the price of the other two!

They say this cracker of an engine is the test bed for the plant that will appear in the coming Ferrari Dino and, if it is, then it will be a stunner. Alfa has built a belter.

This is an M3 killer with an aluminium and steel chassis, rear wheel drive and the torque handled by a vectoring diff which can send 100% of power to either wheel. We have to suffer auto or paddle shift manual whereby, l hear, the US will get a full stick manual! This 2.9-litre twin turbo V6 is ‘inspired’ by Ferrari - that means they made it but don’t want to shout about their engine being in anything other than a prancing horse. You know it’s serious when you see the carbon front splitter, diffuser, side skirts and ceramic brakes and, with 503 bhp, this trounces the BMW M4 GTS!!

I find it quite reserved when driven normally and, might l say it, a tad dull but this is all about full throttle so l duly gave it said throttle through the Ardennes Forest and l can honestly say that neither of the other two cars could keep up. It’s not the raw power that causes it, as the other two are right up its chuff, but the Alfa is so well balanced with its 50:50 distribution that it will brake later into the corner and then pull out of it faster, leaving the other two in its dust. On the flat, it will be eaten alive but on bendy roads, it is supreme. The one caveat is the brakes. Carbon ceramic versions tend to be there when you need them regardless of temperature but here, when cold, they are shocking and really make you insecure. But at around £60,000 it is a huge amount of car for the money and fun all day long.

It would appear that Alfa have finally built a world-class semi-supercar and only time will tell regarding its reliability but the signs are good and at this price, it will be very tough to beat.

Now the result of these three cracking cars over the course of seven days and over 2,000 miles. I was looking for the definitive everyday supercar. The Alfa is only astonishing on a tight bendy road. The R8 is astonishing but on tight bendy roads, the Quattro system often kicks in and stops you doing what you are trying to do therefore, all things considered, the F-Type SVR wins the day. It is truly beautiful, is as fast as hades, sits glued to the tarmac and, oh, did l mention the noise……