“It’s in your blood. I’ve loved being in the shop ever since I was seven.”

READ NEXT
Entertaining at Brighton Fringe 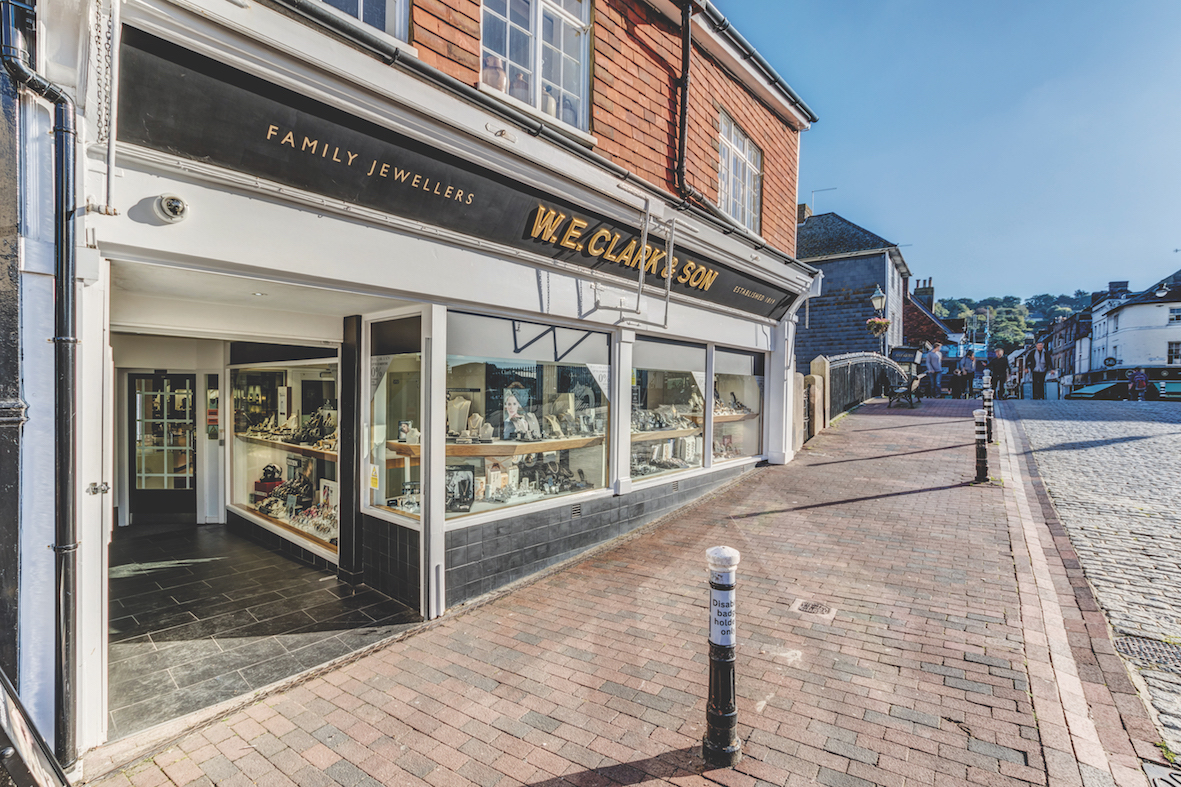 Adjacent to the Cliffe Bridge and overlooking the River Ouse, W. E. Clark & Son jewellers is just as familiar a sight as the nearby Harveys Brewery. The county town of Lewes is steeped in history and has maintained its character and heritage, and W.E. Clark is a reassuringly stable landmark. However, as traditional as it may seem, this is not an old-fashioned business stuck in the past.

The interior is modern and contemporary, the jewellery is on trend and the business embraces the latest technology. It is apparent that this is a jewellers that intends to adapt and innovate into its third century.

The current Managing Director, David Clark, had always intended to join the family firm, but it happened sooner than was planned. “I joined in 2000 when I was 19,” says David. “It was a bit earlier than I had anticipated, but I came back to help because of the damage caused by the Lewes Great Flood, when there was about six feet of water in both the shops. It actually gave us an opportunity to strip right back and start again. We didn’t get a great deal back from the insurance and we had to invest a lot of our own money, but we decided to see the silver lining and took the chance to modernise.

“I was working at an independent jewellers in Staffordshire and the idea was I’d stay there for two years to learn the trade, but I came back after one year as my father needed some assistance after the flood.

“We have brought it up to date, for instance the lighting is now much better, and lighting is important when you are looking at jewellery. We also have installed welcoming customer areas with good quality coffee and we can offer clients a complimentary glass of Prosecco. It’s all about making the customer feel welcome.

“One of the first things we did was extend the main shop and bring everything under one roof.”

Although David stepped in at a younger age than expected, it was a move he was happy to make: “I am the youngest and the other two didn’t want to join the business. My dad didn’t put any pressure on me. He told me that if I wasn’t interested he could sell up and enjoy the money! Unfortunately for him I did decide to carry on the company.

“He’s been here for 51 years and he still loves it. He intended to retire last year but he’s still here! It’s in your blood. I’ve loved being in the shop ever since I was seven.”

Still only 36, David has been able to bring the changes, especially from a marketing perspective. He says, “In the last four years we have seen change, especially as people think twice about spending their money, and jewellery is effectively a luxury purchase. We have spend a lot of money and time developing our website.

“In 2017 we launched an on-site jewellery repair service, with two goldsmiths based in our Lewes site. This brings both our watchmaking and jewellery making is in-house, as well as our engraving service. In the late 1970s we launched our own brand, The Clark Collection, which was forward thinking for the time. With our Computer Aided Design (CAD), a customer can come in with an idea of an item that they want, and we can get on the computer and design with them their own bespoke item of jewellery.

“The current trend is for minimalist designs. We stock a brand called Georg Jensen which is very popular at the moment for its classic simplicity.”

The other change since David joined is the expansion outside of Lewes: “We have just opened our lovely new shop in Uckfield which has gone down very well. It is a good place to be as it still has a busy High Street with plenty of independents, which is quite unusual. And we have an Eastbourne store which concentrates more on pre-owned jewellery, of which we have about 1,500 pieces.

“In 2013 we decided we couldn’t always rely on the external watch repair service we used  so we found a master watchmaker and we launched a watch repair service. Now it is promoted online it is a national watch repair service with free no-obligation quotes. We get calls from people who have an old watch just sitting in a drawer for decades, and we get these working again, so they can handed to the next generation. We can repair all watches, but it seems we have developed a speciality for vintage or pocket watches, many of which are pre-1940.”

The experience of staff extends beyond the skilled watchmakers as David explains: “All our staff members are professionally trained jewellers who have earned their diplomas, so they do know what they are talking about. They always ensure that customers are made to feel welcome and would never pressure anyone into a sale. Tea and coffees are always available!”

As this is the Lewes issue of ACES, the final topic inevitably is the benefits of being associated with the county town.

“I have always lived in Lewes,” says David. “I couldn’t imagine living anywhere else. Both myself and my father have been actively involved in the Lewes Chamber of Commerce and we are both past Presidents. Keeping the local business community strong is very important.

There is a mantra of independence which runs through Lewes and it is very endearing, and I think this spirit has kept the town prosperous.

1919 - Wilfred Ernest Clark moved from London to Lewes and purchased the business, and W. E. Clark was established.
He ran the company for nineteen years and was latterly joined by his son, Jack.
The photograph shows Wilfred Ernest playing bowls at Lewes Bowling Club.

1947 - Jack Clark took over the business. Jack met his future wife Bruna whilst she acted as his translator during his service in Pesaro, Italy, during WWII. They both returned to Lewes where they had one child John Clark.

1979 - John purchased the premises at 224 High Street. There was now a presence on both the East and West side of Cliffe Bridge.

2000 - On October 12th, The Great Flood wreaked havoc as several feet of water swept through both premises. David Clark joined his father in the family business the day following the flood.

2001 - New brands were acquired, advertising was created and events were organised. 'The Clark Experience’ was born.

2013 - The watch repair and restoration service was expanded. W.E. Clark’s master watchmaker is one of only 10 experts in the UK to hold this title.