Why international aid is still vital

“Despite the Government pledge of free primary education for all children, nearly one million children are out of school, the ninth highest in any country in the world.”

READ NEXT
The growth of the brewing industry in Sussex 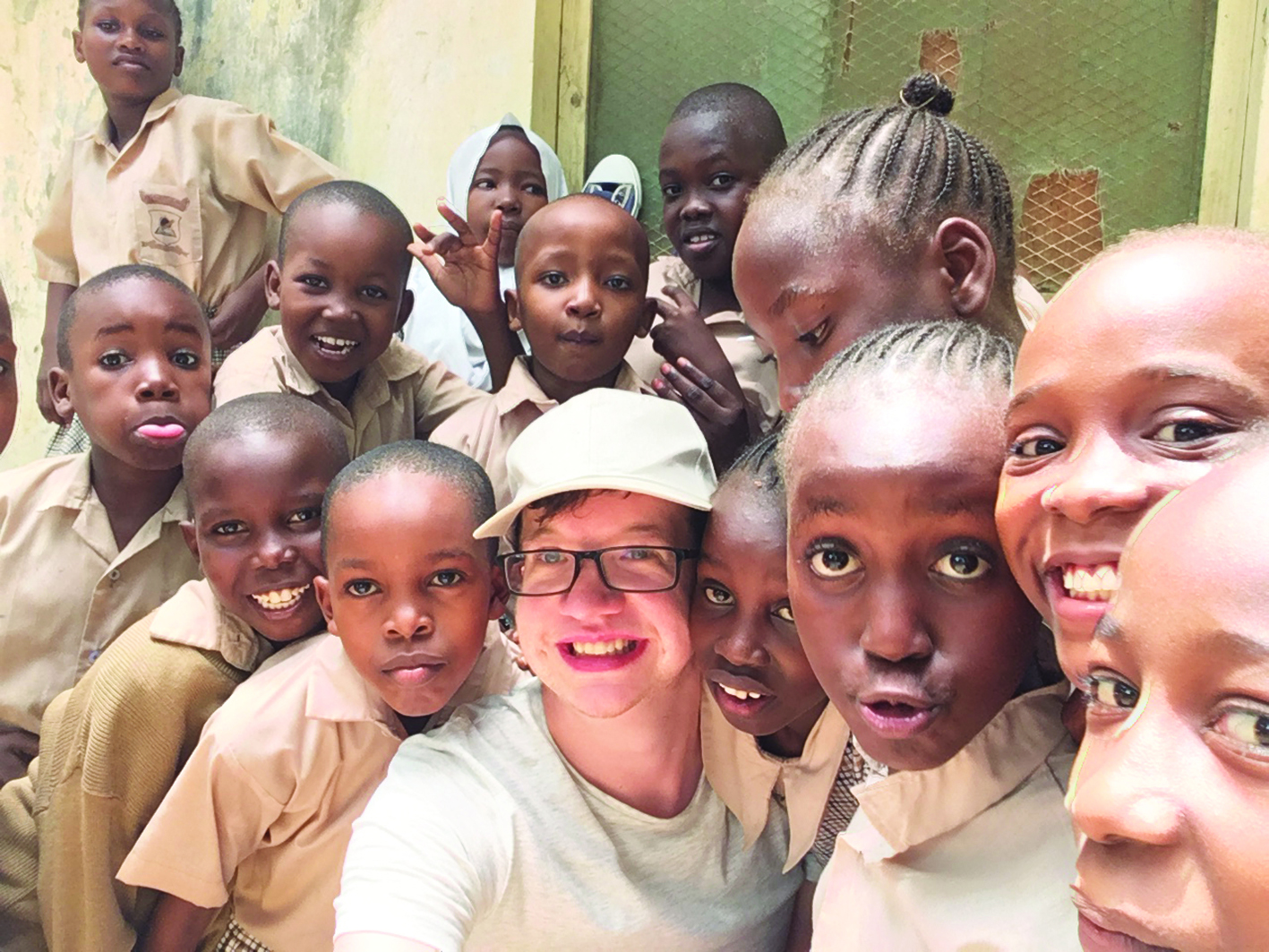 The first thing I do when I board a flight is read the in-flight magazine. It was no different when I boarded the night flight from Heathrow to Nairobi on Kenyan Airways for the nine hour flight that would eventually end in Mombasa.

In their magazine, the contributors emphasised how Kenya had grown, with their vision for 2025. It stressed the richness of the Africa I was about to visit and how the country was producing a wave of sport, film and political megastars.

And it’s largely true. Kenya, with its beautiful scenery is a tourism hotspot. Not only that, but it is ranked the fourth largest economy in Sub-Saharan Africa with both Nairobi Airport and Mombasa seaport the second busiest in Africa. It has an emerging middle class with the highest rate of internet access on the continent. In fact, it is predicted that over the next 10 years, the number of millionaires in Kenya will grow by 80% - one of the fastest growing in the world.

Little wonder then that multinational companies such as Google, Coca-Cola and Heineken are making Kenya their regional base, and why Kenyan Airways has announced the first ever direct flight to JFK International Airport from Nairobi this year.

However, as with most developing countries there is gross inequality in the distribution of this wealth which fails to trickle down to the poorest. According to the beleaguered Oxfam, the richest 10% of people in Kenya earn on average 23 times more than the poorest 10%,  and the 2015 State of Mothers Report stated that Kenyan mothers face a 1 in 53 chance of maternal death - compared to the UK’s 1 in 6,900.

I had been asked by a trustee of the charity Friends of Mombasa Children to visit Unity School. Set up in September 2007 Unity School provides education for children in the nearby slums of Mombasa – primarily Bombolulu and Frere Town. The school’s location is almost a microcosm of Kenya. A fifteen-minute drive from sandy beaches and luxury hotel resorts, the school finds itself surrounded by wasteland, a rubbish dump and a drug rehabilitation centre.

Despite the Government pledge of free primary education for all children, nearly one million children are out of school, the ninth highest in any country in the world. Whilst education may be free, families struggle to pay for the basic equipment needed such as pens, pencils, exam fees, textbooks and uniforms.

Since July 2002, Friends of Mombasa Children has been supporting children living in the slums of Mombasa. Initially the aims of the charity were simple – to get as many pupils sponsored through education as possible. This would mean that the supported school would be more stable as teachers’ salaries could be paid on a regular basis and students could be provided with their basic needs.

Within a few years, the charity grew in its ambitions and aims. In 2006 they were able to purchase their first plot of land and construction began on a new school shortly after.  Originally, the buildings constructed

were designed to be temporary – little more than corrugated iron sheds, they have stood for eleven years.

The classrooms have dirt floors, no windows or electricity. The school day starts at 6am and concludes twelve hours later.

Often temperatures can reach 35 degrees, making the long days very hard on the staff and children. In the yard there is a single tap for all and the school is bordered by a barbed wire fence for protection. Lessons are conducted with around 40 students sat at wooden desks, sharing textbooks and equipment and copying notes from a blackboard. A maths textbook for ten-year olds asks children to calculate the number of people who will visit a HIV clinic in a given month. Children are taught about the threat of terrorism at a young age both in the classroom and in public spaces, and are subjected to security searches before entry.

Students are aged between three and fourteen. Whilst some pay a nominal school fee, many continue to be subsidised or supported in full by the charity. The charity also sponsors access to free primary healthcare, helping to prevent the spread of disease and injuries provided by Dr Luke – himself brought up in Mombasa’s slums as a child.

I first visited the school in 2011 with a group of friends and helped set up their office administration procedures. This time, I wanted to see for myself how far the school had progressed and what plans they had for the future.

On arrival at the school, I was greeted by Rasheed who I first met as a teaching apprentice seven years ago. As a young boy Rasheed was sleeping in church doorways. He was found by the charity as it was being established and attended the school it first supported.  Through the generous support of the charity and individual sponsors, Rasheed finished school, then secondary education and college, and has trained to become a teacher, returning to Unity school to finish his training.

Rasheed’s story is one of many of former pupils who have managed to set up their own businesses, been supported into secondary education or who have found good jobs nearby.  Pastoral support continues after the pupils leave with many students keeping a close family link to the school.

The children often face unsettled home lives; as a result, in 2011 the charity rented out a nearby house to act as an orphanage. This provides emergency accommodation for up to eleven students rescued from dire circumstances who are cared for by a matron.

Nothing goes to waste at the school – pencils are used until the last nib, textbooks shared by the many and chalk closely watched by the teachers. Nothing is thrown out. Leisure equipment is scarce with children often playing football with a plastic bottle filled with dirt whilst discarded rubbish burns close by.

By our own standards the conditions are less than ideal. But the charity strives to continually improve the school and its environment whilst day to day management is left to the senior teachers located on site.

In 2011 the school was provided with water and electricity. In 2016 the cook house was modernised with gas ovens replacing the smoky open fires. These ovens provide free school meals to all the students and teachers – for many, their only meal of the day.

Even bigger and better

Last year, the charity was left a legacy from a supporter which has allowed it to begin construction of a new concrete school. While construction has been held up by flooding and elections, building is slow as construction is largely by hand. The foundations are deep enough for three storeys and it is expected that the first floor with classrooms, a separate toilet block and office will be open this summer.

For many involved in the charity the new building offers renewed optimism and fuels a determination to provide the best chance for children who would otherwise have little hope of a successful life. However, the new building is not yet a school and the charity requires further donations to ensure that it provides enough textbooks, chairs, tables and learning equipment to keep its good work going.

Children are the same the world over – they have the same interests and they love to play.  I spent a surprising amount of time in the yard discussing why Ronaldo was a better player than Messi, why Arsenal needed to get rid of their manager and why Manchester United was better than Chelsea. They would happily share their dreams for the future – their hopes of becoming a pilot, a teacher, an engineer or a doctor. They would speak with pride about their school and loved to play with their school friends so I found myself thinking up games to play in the yard which required no equipment.

The sounds of children playing and the smiles on their faces are always on my mind and especially as I write this for ACESussex. Leaving was harder than I expected and I look forward to getting back when I can.

I feel deeply honoured to be able to say, “I helped build a school in Africa” and want to be able to help provide equipment and their basic needs like books, paper and pens. If your company produces anything that could be used by this school, please contact me.

Stephen Holt works for Eastbourne unLtd Chamber of Commerce, ACES the Alliance of Chambers in East Sussex and Edeal Enterprise Agency. Along with providing business support across East Sussex he is now supporting education for over 400 children in a dynamic corner of Kenya. Call 01323 641144 if you would like to help.

If you would like to be involved in the charity or provide any support to the school please visit www.mombasachildren.org.uk.

Any support is gratefully received, particularly now as the building works near completion.

Adjacent to the Cliffe Bridge and overlooking the River Ouse, W. E. Clark & Son jewellers is just as familiar a sight as the nearby...