Brighton Gin - Spirit of the Seaside

I’ve always loved gin; it’s the one drink that will never give me a hangover.

READ NEXT
Michelle Mone's Fight to the Top 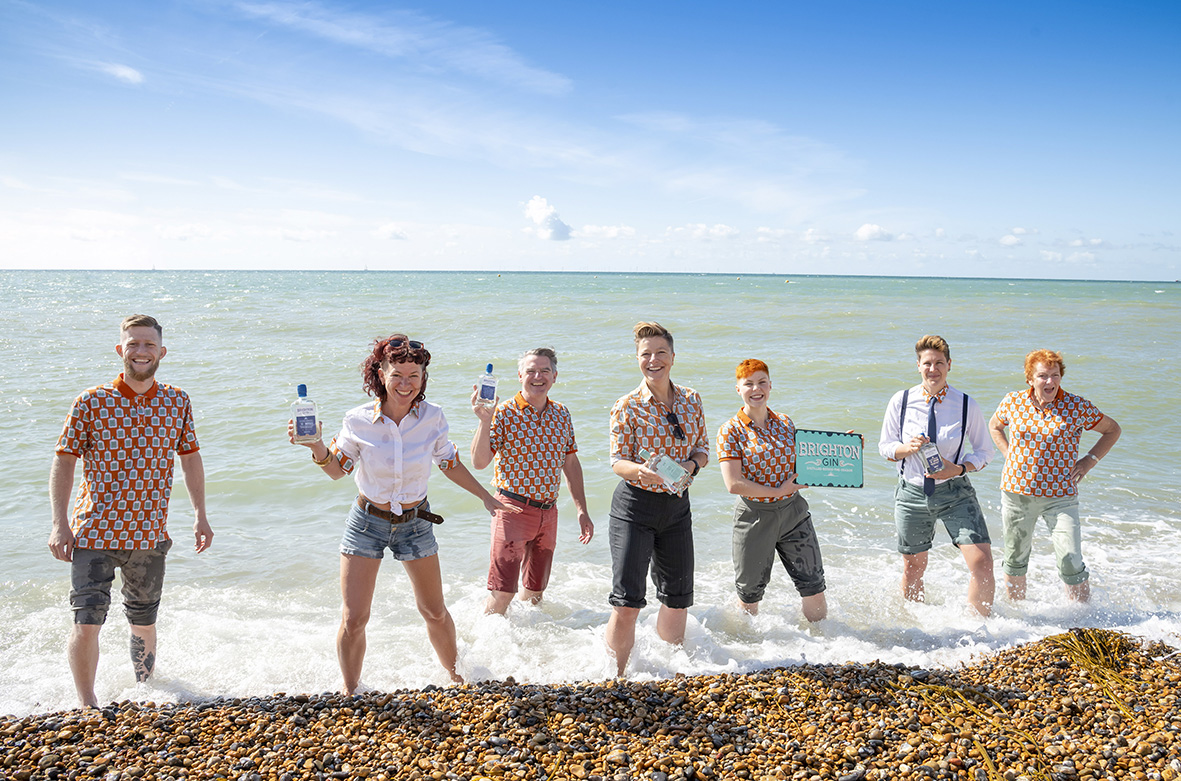 It helps that when you meet the founder of one of the industry’s most exciting gins, that it’s also your favourite tipple of choice. I met Kathy Caton, founder of Brighton Gin, at its headquarters and distillery on a sunny day in Brighton… of course.

Kathy is everything I expected. She’s smart, she’s fun and she’s focussed. She exudes a playful charm that’s hard not to like. We chat over tea and biscuits, surrounded by bottles of glistening crystal clear gin with aromatics filling the air. Josh, one of Brighton Gin’s distillers, stands behind me next to the distillery’s one and only still, meticulously picking through sacks of fragrant goodies, including fresh oranges and herbs, whilst Production Manager, Jude, aka Kathy’s mum, waxes bottles calmly and methodically in their signature teal colour, inspired by Brighton seafront’s iconic railings.

Having taken the artisan gin world on single-handedly, businesswoman and master distiller Kathy is still as humble as the city in which she lives. “It started off as a hobby. I’ve always loved gin; it’s the one drink that will never give me a hangover. You can drink it with friends until the early hours and still get up the next day without a headache. And if you’ve ever had a hangover headache, you’ll know the one I mean.”

Kathy’s moment of clarity happened in 2011. “I went out for a morning run along Brighton seafront following a night of gin-drinking with friends – I knew that if I’d been drinking whisky or wine, I wouldn’t have been running! It was then that I had my lightbulb moment. Brighton needed its own gin! After all, gin is the one drink that lets you get away with it and Brighton is the place that gets away with it on a frequent basis!”

She continues: “At the time, craft-brewing was taking off and micro-distilleries such as Sipsmith and Sacred Spirits were all showing that small-batch distilling was having a moment and I realised Brighton needed its own version.

“Like craft beer, new-wave gin was beginning to appeal to a younger generation of drinkers, who craved quality and authenticity in their booze. I was realising that gin was a totally non-gendered drink too, and that more and more consumers were young guys at university, for example. Something exciting was happening and it was because of this and my own love for gin that I started on my quest to quell the old adage, ‘mother’s ruin’”.

With a background in drama and broadcasting, Kathy attended drama school before starting her career in radio working for BBC Radio 4 as schedule manager on Women’s Hour, and as script consultant for The Archers – a role which she still maintains. A few years later, having decided to move to Brighton, Kathy took her first job as resident DJ on Brighton Palace Pier, before finding work at BBC Sussex and Surrey, and RadioReverb, Brighton’s local not-for-profit radio station. 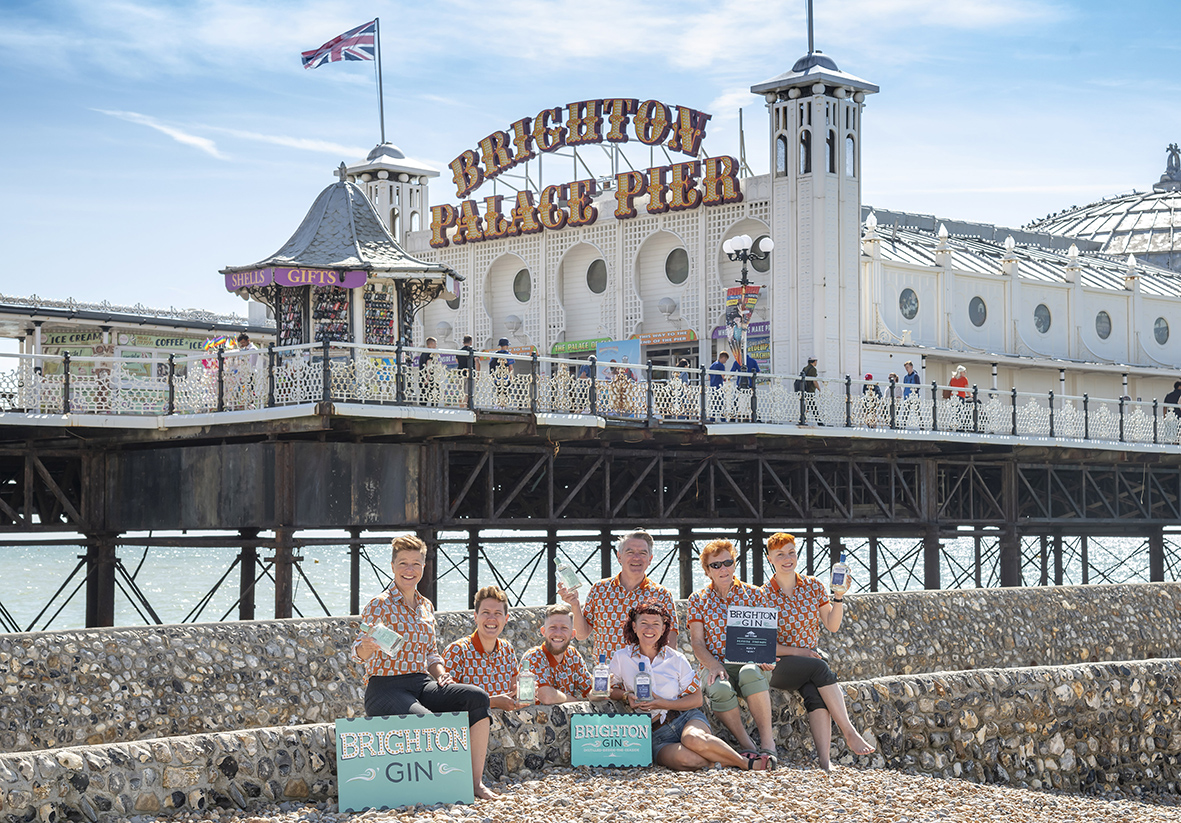 Determined as she is courageous – her first line in her school book read “I want to be the first woman on Mars” - Kathy has never been afraid of ambition and her success has always been likely, after all her great grandfather set up a distillery in his garage, producing whisky for his own consumption, hiding parts of the still underneath his mushroom bed.

So with distilling possibly already in her genes, how was Brighton Gin born? “I started working on the concept of Brighton Gin round my kitchen table in 2011. I told a few friends about my idea and they laughed, declaring; ‘if anyone was going to do it, it would be you’. It was those friends, one a laser physicist, that stayed up with me throughout the night, recipe tasting and experimenting in one small copper still on the kitchen stove.”

Caton continues: “Originally we wanted loads of different ingredients and distilled each botanical individually so that we could find out their individual characters and tastes. It was trial and error. For example, we realised that dried orange peel actually tasted quite woody, so we started to use fresh citrus peel instead. There is actually a science behind distilled spirits, the purer they are, the less of a hangover. The distillation process strips away any nasties and if gin needs to have a fairly high price tag, it’s got to have the quality.”

“Just over 18 months later, we made our first batch of 400. We launched a week before Christmas, and vowed we would never do that again,” she laughs. “We thought the first batch would last us until spring the following year but we sold out that first week! We wanted to make a proper gin lover’s gin and I think we achieved that.”

And they certainly have. Kathy and her team have been in their current seaside industrial space, the biggest so far, for three years now and produce around 30,000 bottles a year - approximately 5% of those are exported with the aim of doubling that figure in 2020. Each batch of gin contains 100% organic grain (a key to dodging the musty head), fresh orange and lime peel, juniper - hand harvested in Macedonia - angelica and coriander seeds.

“Brighton Gin is 100% vegan and we want to be the world’s first carbon neutral gin,” says Kathy. And sustainable and green spirited they are. The bottles are sourced locally from the last British bottle manufacturer using 40% recycled glass from the South Coast; their signature wax is supplied by The British Wax Refinery in Redhill; their labels are designed locally in the shape of a fairground ticket and affixed by hand using vegan glue; whilst all the mash from the still is recycled for compost. They even fill and wax each bottle by hand - a particularly precise process which undoubtedly shapes its handmade in Brighton status. You may even see one of their gin bikes out and about, delivering locally and sustainably wherever possible. 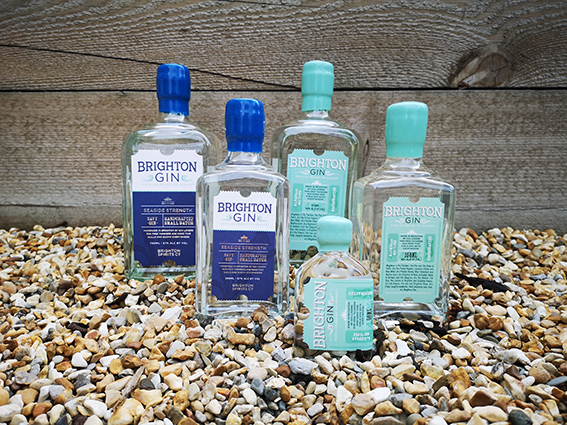 “British gin is the best in the world but it’s also important to drink with a clear conscience whilst also having fun,” Kathy explains.

And it’s this playful exuberance that has brought a second gin to the family. Seaside Strength 57% Navy Gin is the perfect accompaniment to the original Brighton Gin Pavilion Strength. It has an exhilarating freshness which is perfect as a base for cocktails. “Our Seaside Strength makes the perfect Negroni, stirred and poured over ice. Or serve it with tonic and a sprig of mint with the juice of a lime, that’s a favourite of Jude’s.”

And Kathy’s? “Brighton Gin with lots of ice, a light tonic and a slice of orange to bring out the flavours of the botanicals. Or neat on the rocks, sipped slowly, that’s perfection for me.”

Brighton Gin is certainly a reflection of its founder, versatile, charming and approachable and the world’s renewed love affair with gin is certainly not slowing down. Cheers to that!