The first black female football presenter on the BBC 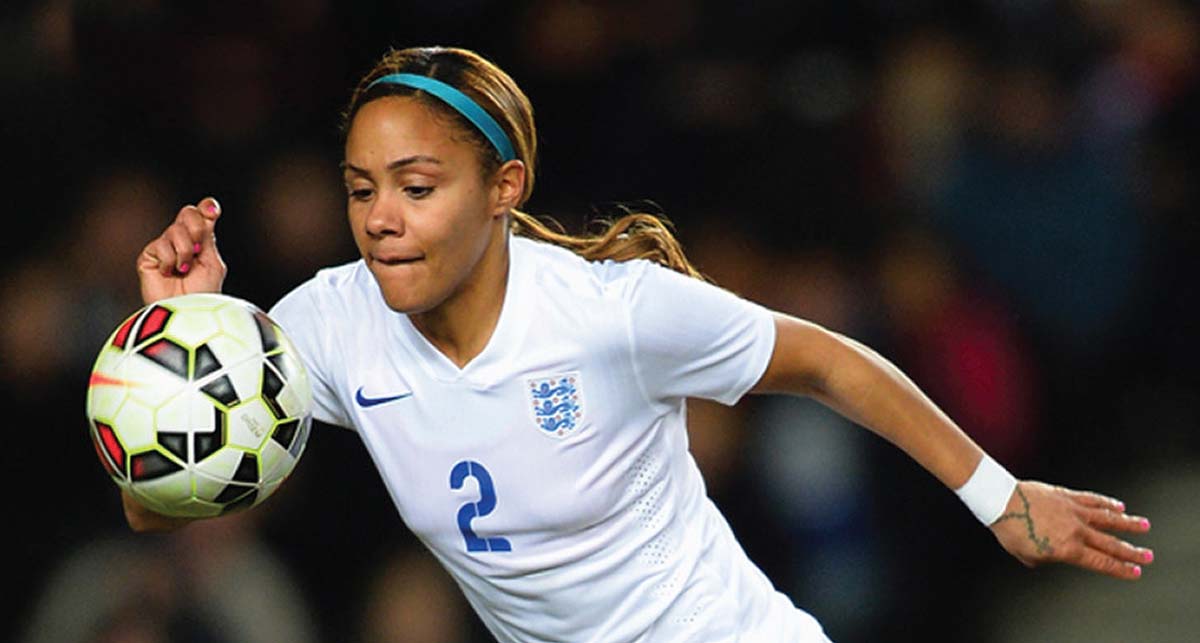 With football being such a male dominated sport, both on the field and on the television, it is refreshing to see the corporation finally appoint their first female presenter in the shape of Alex Scott. Having enjoyed a very successful career as a major part of the England women's football team, Alex will bring a breath of fresh air to the stale male world of football pundits. By Roxy Costello-Ross

Professional footballer turned television broadcaster and pundit Alex Scott was the second child born to her Irish mother and Jamaican father on October 14th 1984 in Poplar, east London. She began her football career at the early age of eight when she was signed for north London football giants Arsenal FC after her passion for the sport became apparent in primary school. Following on from her early entry to the sport, she went on to associate with Arsenal for a further three decades. After moving from the Arsenal youth squad in the 2004-5 season to play for Birmingham City, she returned to Arsenal for a brief time, becoming a key figure in the team’s FA Women’s Cup and FA Women’s Premier League victories in 2005 and 2006. She was also instrumental in their season of four trophy wins across 2006-7, before moving across the world to play in the United States of America. While she was in the USA, she played for both the Chicago Red Stars and the Boston Breakers and was one of few British footballers plying their trade abroad.

In 2011, Scott founded ‘The Alex Scott Academy’ for female footballers aged 16-19, partnered with Kingston College and Puma, to grow women’s football into a mainstream sport. Her football career became hugely successful after making 140 appearances for the England women’s national team, including the World Cup and the 2012 Summer Olympics. Scott has been regarded as one of Great Britain’s most versatile players and, further adding to her success, she became the seventh player to earn 100 caps and won a bronze medal with England at the 2015 Women’s World Cup.

Her life hasn’t all been easy, however, at only age seven her father left the family, taking everything in their home with him. In an interview, Scott shares how he “basically took everything – the television, the radio… everything in the house until there was nothing.” She expresses how her mother “let him take everything, she didn’t fight or scream” and that “there had been enough of that in our house, and that was never something she was going to do.” Scott speaks very honestly about the role that her mother played in making sure that she and her brother still had a happy childhood, saying “even though we had nothing, we were going to be OK because we had her.” She revealed that she uses this life event as a motivator to work hard so that she never has to be in a position where everything would be taken away from her again.

Before her retirement in 2017, she appeared on Bear Grylls’ ITV show, Mission Survive, which she won, and in 2019, she appeared on the 17th series of Strictly Come Dancing with her dance partner Neil Jones. This upgraded her to being a household name, as the pair made it to the 11th week before being eliminated, coming in a respectable fifth place. Alex spoke about her time on the dance show and how it helped her to show off other parts of her personality outside of her football ability, saying: “I can put on a dress but also the next day put on my football boots, and that should be celebrated. I’m so proud of my career but, as Strictly showed, there can be so many parts to a person – and I’m no different.” She also shared her other passions besides sport, saying: ”I love fashion and music, and I love going to my mum’s in east London for a roast dinner”. Scott was also appointed Member of the Order of the British Empire (MBE) in the 2017 New Year Honours for her services to football.

Even while still playing football, Scott started the transition into her media career, making appearances in programmes such as Soccer AM, and had other minor roles at BBC Sport, BT Sport and Sky Sports. This set her up for a seamless transition into full-time television broadcasting after she retired from football in 2017, when she began co-presenting on Match of the Day Kickabout. She then became the first female football pundit at a World Cup for the BBC after covering the 2018 FIFA World Cup, also exposing her to a wider audience of soon-to-be Alex Scott fans.

However, this job has come with its hardships; when Danish midfielder Christian Eriksen collapsed just before half-time in his team’s opening match against Finland, Scott was one of the BBC’s Euro 2020 commentators who had to react to the incident, which looked to be fatal, live and on camera. She tearily told host Gary Lineker “Football totally goes out of the window right now…You’re thinking about his family and all the rest of the players that are out there witnessing it as well. I just got on my phone and messaged my mum and told her I love her, and I think it’s a reminder of how quickly life can change, just like that.”

Unfortunately, Scott has faced her fair share of criticism, from both online ‘trolls’ and people with larger social media presences. Former government minister Lord Jones of Birmingham went on a Twitter rant after Scott presented the BBC’s Olympic coverage, saying she “spoils a good presentational job” with her “very noticeable inability to pronounce her ‘g’s at the end of a word.”

He went on to mock her accent, saying: “Competitors are NOT taking part, Alex, in the fencin’, rowin’, boxin’, kayakin’, weightliftin’, and swimmin’”, and compared her to Sky presenter Beth
Rigby and the Home Secretary, Priti Patel, both of whom have been mocked for their accents in the past.

Scott responded to Jones’ tweets, saying she is “proud” of her accent and “proud of the young girl who overcame obstacles”. She offered an inspirational word of advice to any young kids who may not have a certain kind of privilege in life to “never allow judgements on your class, accent, or appearance hold you back”. Many people spoke out in support of Scott after these tweets, including Piers Morgan, Stephen Fry and Rob Drummond. The latter, head of youth language at the Manchester Centre for Youth Studies,  offered some education on dropping g’s as a feature of different accents, and that women, especially women of colour, are disproportionally called out on the way they speak compared to other people. Jones, however, still stands by his comments and says he was “disappointed” with Scott’s response.

She has repeatedly spoken out about the sexist and racist abuse she receives as a pundit, and in 2019 she said she receives hateful messages almost every day. She revealed how being on the receiving end of this unrelenting social media abuse forced her into her shell for some time as she struggled to deal with the negativity. Scott has demonstrated great strength to shake off the unwarranted hatred so that she can continue to succeed and make a pathway for women in the industry.

When on “Between The Lines”, a podcast hosted by the Independent’s Senior Football Correspondent Melissa Reddy, Scott shared how she lost herself with her personality because of the hate comments, and that she only spoke out about the abuse when it became too much for her to handle on her own. She talked about how speaking to people about her struggles helped her to feel less alone, especially after Sky Sports refreshed their Soccer Saturday line-up.When Scott was announced as the new Question of Sport presenter, she was
attacked with hate speech.

She speaks openly about how, at one point, she thought about coming off Twitter, until realising that it had been her strong social media presence that helped her to connect with fans. By staying on Twitter she could continue to offer support for them, saying: “If that’s giving more encouragement to young females in that they can see me and I’m visible and that they can do that, then that’s great”.

Despite the hate she receives, Scott likes to focus and emphasise the positive elements of how she is helping to alter the media sphere in football. She praises ex-footballer Graeme Souness, with whom she has commentated matches, for treating her in the same way that he would treat a male co-worker. Fans on Twitter rushed to her defence following an exchange with Souness during a match analysis in February 2019, where he interrupted Scott and was dismissive of a football term she had used. Scott later expressed how she felt about the situation, saying “Graeme Souness is like that with every pundit he sits alongside, but with me, it’s highlighted because people see me as a female…If he’s got a strong opinion and he disagrees with you, he’ll say that. I respect that and want people to be like that with me.” She conveys how important it is for women to be treated in the same regard as men, even in male-dominated industries, and that she is not just there to tick a box, but she has done the work and deserves to be where she is. Scott serves as a role model for many women out there and consistently shows how women today can be successful in whatever industry they like, no matter where they have come from.

Whilst one might think that driving and reviewing a wide range of new and thrilling cars is one of the key perks of writing for Dynamic,...

Between May 2020 and May 2021, Google searches for impostor syndrome increased by 150% in the UK alone. Although these feelings have...