Are You Sitting Comfortably? 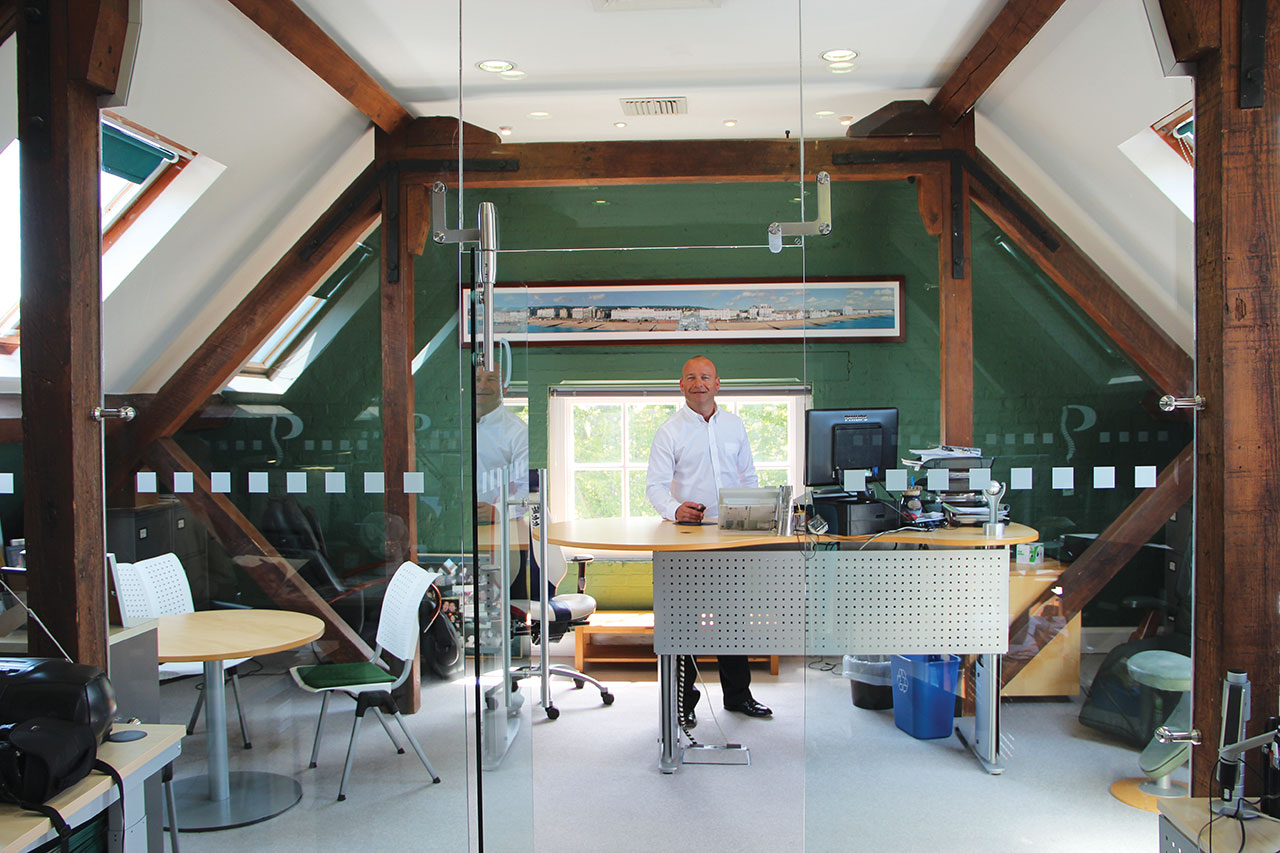 Posturite is a genuine Sussex business success story. Posturite is not just the largest independent ergonomics company in the UK, it is the largest independent supplier of all office seating in the UK, working with 75% of FTSE 100 firms. The company creates and supplies clever ergonomic office equipment designed to reduce aches, pains and musculoskeletal injuries, improving the health of businesses by protecting the safety and wellbeing of the people who work for them. Each month they help over 1,000 people back to work and have been awarded ‘Gold Investors in People’ status.

Over the coming issues of Platinum Business Magazine we will reveal the Posturite story in a series of interviews with Ian Fletcher-Price (Fletch) recounting the journey from Fletch tinkering in his mum’s garden shed through the tricky growth phase and the resulting success in both domestic and international markets. Interview by Ian Trevett.

Part One - How it all Started

Posturite is the nation’s leading ergonomic furniture brand, but it only came into existence after Ian Fletcher-Price, known by friends and associates as Fletch, decided that the City of London wasn’t for him

“I had a nine year career in the reinsurance market at Lloyds of London, starting straight from school,” says Fletch. “I had been expelled from Eastbourne College – nothing too heinous, drinking and women, nothing I’m not proud of! So I was shoved up to London by my father and I worked for three big companies. I managed to get sacked a couple of times for being creative with new products - to this day I think I was right and correct but that wasn’t how the directors saw it.

“There was a degree of sulking and anger and a desire to be in control of my own destiny, so at 26 I moved back down to Sussex and back in with mum. It was a bit of a shock to everybody, as I had been earning quite well, had a company car and the grand title of Assistant Director. I started from scratch as a cabinet maker. I thought that was something I could control, and woodwork was my skill from school. It was really stripping it back to basics. This was back in 1990.

I got a break early on when an old school friend, Simon Petrides, who by now was an osteopath, heard what I was up to and said to me: “I’ll give you your first commission. Make me a sloping writing board that I can sell to my patients to make them sit them up straight to read and write at work.” So I did just that in my mum’s garden shed and made what became the Posturite writing board. We showed it at a conference he was hosting in December, 1990 and we shook hands after the conference agreeing to set Posturite up together. I have to say we didn’t really have any strategic vision as to where we were going.”

Despite almost a decade in the heart of the UK’s financial capital, Fletch is the first to admit that he lacked the knowledge of how to create a company:

“I was a complete business virgin,” concedes Fletch. “I can’t tell you how useless the nine years in the Lloyds market were. They taught me how to lunch well, I knew my way round the wine list and an expensive London menu but in terms of the real world I was very naïve. Even just registering the name of the company, that was all completely alien.

“Even our name wasn’t right. We were called ‘Postuwrite’ and our lawyer asked, ‘How on earth do you pronounce that word?’ We took the w out at the very last minute and that’s how the brand Posturite was formed. I

was so naïve I didn’t understand the difference between a logo and a company registration name. So I said to him “What if I put a spine in on the p, that could look quite cool.” And he said ‘That’s called a logo, old boy’.

Looking back it is hard to see how the company survived. It did so out of sheer determination and faith.

Fletch recalls: “The only reason the company survived was that I had no commitments at the time. I had nothing else going on in my life and was living with mum. We weren’t paying ourselves and were pretty much flat broke but we bought into a vision. Even then I had no idea it would ever be my career destiny and that would be it. Then it was raw survival and actually doing something to stick two fingers up the city who were constantly badgering me “Come on, swallow your pride, come back to the Lloyds market, we’ll give you a job…”

“In those days it was very much the old boy network in those sorts of markets. Your mates would rally round and just drag you into another job but I wasn’t interested.

“The first small turning point was when we turned over £150,000 in the third year and actually made a small profit. I think we made something like £5,000 profit so that grandly reduced the balance sheet deficit to under £40,000. But that still seemed like progress, it still felt like we were going the right way.

“After about six or seven years I began to think for the first time: ‘Actually, maybe this is what I’ll do for the rest of my life’. I was still a relatively young man, I was only just in my 30s. It was so consuming, it was a 24/7 job. I was making the products at the weekend and selling them in the week.”

It took a while, but eventually the basis of a real business began to develop:

“I refer to the first eight years as the first quarter of the history of the business. We had built a portfolio and a range. We had a chair, a desk, a footrest, a document holder, a keyboard, a mouse and a sloping board. By now there were four of us working in the business. I had got my mother to help out by answering the phones but she soon became an integral part of the business. She had retired but was working flat out. Carol was the first employee, and Norman who took over making the products. And after about eight years the four of us had built the turnover up to £1 million.”

Next Issue: Fletch on growing from a small business to becoming the market leader.